It was Sarah whose inspiration drew people to Green Acre from many parts of the world. All people, all religions were welcome and are still welcome today. 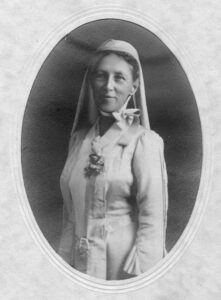 Sarah was born into a wealthy New Hampshire family. Her mother, Hannah Tobey Shapleigh  Farmer (1823-1891) was a prominent philanthropist. Her father, Moses Garish Farmer (1820-1893) was an electrical inventor and professor and had more than 100 patents including the fire alarm pull box that we use today.

The family moved to Eliot, Maine in the 1880s and ten years later Sarah along with four men opened up a hotel-resort. In 1892, Poet John Greenleaf Whittier stayed at the resort calling it “Green Acres”. In 1900, she went on a cruise with a friend to the Mediterranean and met some friends who were heading to ‘Akka (Israel) to visit ‘Abdu’l-Bahá. Sarah cabled ahead to ‘Abdu’l-Bahá requesting permission to join her friends in the meeting and the request was granted.

That was the moment that changed her life. Upon her meeting and being in the presence of such nobility and in Sarah’s own words, “Heart too full for speech – received by my Lord”.

The Sarah Farmer Inn, gracing the banks of the Piscataqua tidal river in Eliot, Maine, celebrated its one hundredth anniversary in 1990. It was established on the very spot made sacred and historical by a gathering of Indian Chiefs, centuries ago, to smoke the Pipe of Peace. In 1994 a peace flag was raised at Green Acre which commemorated the 100th anniversary of the first raising of a peace flag on the property in 1894. 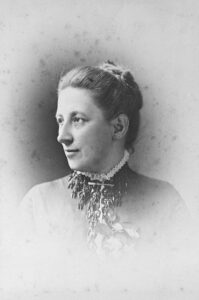 Sarah managed the resort from 1890-1916, and as a result a unique environment was established for the purpose of drawing together divergent philosophies and doctrines. From its inception open-mindedness thrived. Since the days of the first summer conferences begun by Sarah Farmer, Green Acre has attracted people of many religions, races, and cultures intent on fostering unity, understanding, and peace.

After Sarah became a Bahá’í in 1900, she focused the efforts of the institution on Bahá’í themes. Many Bahá’í speakers were invited, including Mírzá Abu’l-Fadl and ‘Abdu’l-Bahá in 1912 among several.

It was Sarah whose inspiration drew people to Green Acre from many parts of the world. All people, all religions were welcome and are still welcome today. A cross section of humanity came to offer their knowledge and talents – A flowering of the human spirit resulted.

One year in the rich history of Green Acre is cherished above all. In 1912 when ‘Abdu’l-Bahá, the son of the founder of the Bahá’í Faith, Bahá’u’lláh, spent a week at Green Acre and lectured during His tour of the Western world. He spoke of how someday Green Acre would become the site of the first Bahá’í University and the second Bahá’í Temple in the United States. Today the room in which he stayed is reserved for prayer and meditation. 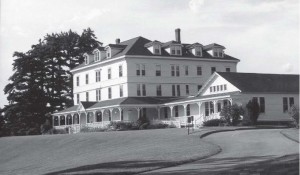 Green Acre, America’s first Bahá’í school, has long been associated with the growth and development of the Bahá’í Faith. Here such Bahá’í scholars as Mirza Abu’l Fadl and Jenabe Fazel taught under the pines; here some of the nation’s earliest conferences on racial unity were held; here lived and are buried the Hand of the Cause of God, Louis G. Gregory, and his wife, Louisa; here lived Kate Ives one of the first two Bahá’í women in North America. Here too was held the first election of the National Spiritual Assembly of the Bahá’ís of the United States and Canada and here was located the first office of the National Spiritual Assembly and the residence of its secretary, Horace Holley.

Today Green Acre thrives as a year round Bahá’í School drawing people from all around New England, The United States and Canada, and the world. The Sarah Farmer Inn has been restored and renovated to accommodate guests. Extensive work on other parts of the property have resulted in the creation of a beautiful place to visit and learn about the Bahá’í Faith including a fully functional Bahá’í bookstore. Picnics and concerts are often held on the grounds bring many people to Green Acre for a pleasant day or two of rest and fellowship.

The final major restoration projects for this day remain renovation of the Chalets and the Library. Most certainly though, Green Acre will continue to change both in scope of education, activities, and number of visitors.

In 1913 Green Acre came into Bahá’í hands. Sarah became very ill towards the end of her life and died in 1916. In 1929 Green Acre was converted into a summer school facility. It is now one of several permanent, year-round Bahá’í schools in the US.