There is much that might be said about this most remarkable man, but perhaps his most outstanding trait was his overwhelming love of life. He embraced life wholeheartedly and gloried in it unceasingly. This enthusiasm was infectious as attested by several people in nearby Cloverdale (one of them being one hundred years old) who looked forward eagerly to Rex’s weekly classes on the Bahá’í Faith. 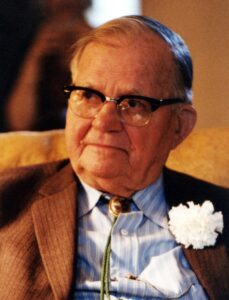 Reginald Collins, known as ‘Rex’, was a kind, humble man with an acute and avid interest in nature. Having been born and reared on a farm, he spent the first eighteen years. Of his life roaming the fields and woods which fostered in him a great love of the countryside and of rural living.

In describing his parents and early life, Rex said, ‘My parents were true Christians and it is to their love, broad-mindedness and Christian virtues that I owe almost everything. My love for them is beyond words. We were poor and I am glad we were for it welded our hearts into a loving family unit.’

About 1903, the parents of Rex Collins gave up everything they held dear and moved to Columbus, Ohio, so that their three children could attend Ohio State University, and were gratified when Rex and his sister and brother achieved distinguished academic records.

After devoting three years to research in animal nutrition in Ohio, Rex Collins accepted a position in plant research on the staff of Cornell University. He held this post for thirtythree years, retiring in 1945 as Chief of Research and Professor Emeritus. During his time at Cornell, Professor Collin’s agronomic and pomological research was concerned with many projects and his studies in relation to plantings in New York of tree fruits and small fruits such as strawberries and blueberries influenced significantly decisions in that State on soil management and fertilization.

Rex married Mary Gale in 1920 and, as he often put it, they became ‘partners in every sense of the word’. They heard of the Bahá’í Faith, studied it together and eagerly declared their acceptance in 1923. Their mutual supreme mission then became to joyously offer the Faith of Bahá’u’lláh to a disillusioned and skeptical society.

After retiring from Cornell in 1945, Rex and Mary and their two daughters, Beverly and Audrey, moved to Geyserville, California, where they already had purchased a home from John Bosch in 1933. Beverly and Audrey, old enough to pursue their own life patterns, settled in Geyserville, while Rex and Mary, in quest of new insights into the significance and purpose of life, Set off, in 1952, for Kampala, Uganda, to do pioneering work for the Bahá’í Faith. In Uganda they served on the committee charged with the responsibility of supervising construction of the Mother Temple of Africa.

But a finer laurel was yet to be won. When the Ten Year Crusade was launched in 1953, the Collins were the first American believers to arise. Accompanied by Mr. Dunduzu Chisiza, a young Nyasaland African who served as their interpreter and shared their home for over a year, they settled in Ruanda-Urundi. (Today, Nyasaland is known as Malawi, Ruanda as Rwanda, and Urundi as Burundi.) For their service in opening Ruanda-Urundi to the Faith the trio were named by Shoghi Effendi Knights of Bahá’u’lláh.

Returning to Kampala in 1955, the Collins were later appointed custodians of the Mother Temple of Africa and they served the Faith in this capacity with great devotion until 1966 when they found it necessary to return home to Geyserville,

God’s purpose for man as expressed in the teachings of Bahá’u’lláh is a simple one, ‘to know and to worship God’. The achievement of this purpose is what Rex and Mary devoted their lives to———what they longed for, toiled for, prayed for, suffered for. Their life together exemplified the ideal of marriage as taught by Bahá’u’lláh. One could not imagine a happier union; they were indeed as the two wings of a bird, flying in harmony with the will of God.

With the passing of Mary Collins in 1970, Rex found his life taking on new meaning and direction. Now it was time to deepen and nurture the dormant relationship with his two daughters (now Beverly Neussl and Audrey MacLeod) and their families. With kindness, patience and deep love he wove a new and wonderful golden thread of meaning into the fabric of his family life, the results of which will surely unfold with the fullness of time.

Rex, a humble and independent soul, did not want to be a burden to anyone as old age slowly but inevitably took its toll. Even in his ninety-ninth year and until he died, he attended to his own cooking, house-cleaning and many chores.

There is much that might be said about this most remarkable man, but perhaps his most outstanding trait was his overwhelming love of life. He embraced life wholeheartedly and gloried in it unceasingly. This enthusiasm was infectious as attested by several people in nearby Cloverdale (one of them being one hundred years old) who looked forward eagerly to Rex’s weekly classes on the Bahá’í Faith. His devotion to teaching was matched by his service as a Spiritual Assembly member and his love for conducting weekly fireside meetings. With his energetic approach and his enthusiastic support of every aspect of Bahá’í life, he was an inspiration to the entire Bahá’í community. His radiance of character was truly admired by family, friends and casual acquaintances alike. He was a gemstone finely cut and supremely polished.

Informed of his passing, the Universal House of Justice on June 27, 1983 cabled: