Muhammad-Mustafá arose to serve the Cause. He rested neither day nor night. After the Ancient Beauty had departed to the Most Great Prison; after the friends had been taken prisoner in Baghdad and sent away to Mosul; after the hostility of outstanding enemies and the opposition of the populace of Baghdad, he did not falter, but continued to stand his ground. A long time passed in this way. 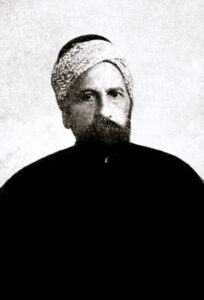 Muhammad-Mustafá was a blazing light. He was the son of the famous scholar Shaykh Muhammad-i-Shibl; he lived in Iraq, and from his earliest youth was clearly unique and beyond compare; wise, brave, deserving in every way, he was known far and wide. From childhood, guided by his father, he had lit the light of faith in the chapel of his heart. He had rid himself of the hindering veils of illusion, gazed about with perceptive eyes, witnessed great new signs of God and, regardless of the consequences, had cried aloud: “The earth hath shone out with the light of her Lord!”

Gracious God! The opposition was powerful, the penalty obvious, the friends, every one of them, terrified, and off in some corner hiding their belief; at such a time this intrepid personality boldly went about his business, and like a man, faced up to every tyrant. The one individual who, in the year seventy, was famed in Iraq for his love of Bahá’u’lláh, was this honored person. A few other souls, then in Baghdad and its environs, had crept away into nooks and crannies and, imprisoned in their own lethargy, there they remained. But this admirable Muhammad-Mustafá would boldly, proudly come and go like a man, and the hostile, because of his physical strength and his courage, were afraid to attack him.

After Bahá’u’lláh’s return from His journey to Kurdistán, the virile strength and bearing of that gallant individual was still further enhanced. Whenever leave was granted, he would attend upon Bahá’u’lláh, and would hear from His lips expressions of favor and grace. He was the leader, among all the friends in Iraq, and after the great separation, when the convoy of the Beloved left for Constantinople, he remained loyal and staunch, and withstood the foe. He girded himself for service and openly, publicly, observed by all, taught the Faith.

As soon as Bahá’u’lláh’s declaration that He was “He Whom God Shall Manifest” had become known far and wide, Muhammad-Mustafá—being among those souls who had become believers prior to this Declaration, and before the call was raised—cried out: “Verily, we believe!” Because, even before this Declaration, the very light itself pierced through the veils that had closed off the peoples of the world, so that every seeing eye beheld the splendor, and every longing soul could look upon its Well-Beloved.

With all his strength, then, Muhammad-Mustafá arose to serve the Cause. He rested neither day nor night. After the Ancient Beauty had departed to the Most Great Prison; after the friends had been taken prisoner in Baghdad and sent away to Mosul; after the hostility of outstanding enemies and the opposition of the populace of Baghdad, he did not falter, but continued to stand his ground. A long time passed in this way. But with his yearning for Bahá’u’lláh, the tumult in his heart was such that he set out alone for the Most Great Prison. He reached there during the period of extreme restrictions, and had the honor of entering the presence of Bahá’u’lláh.

He asked then for leave to find a lodging somewhere in the neighborhood of ‘Akká, and was permitted to reside in Beirut. There he went and faithfully served the Cause, assisting all the pilgrims as they arrived and departed. He was an excellent servitor, a generous and kindly host, and he sacrificed himself to see to their affairs as they passed through. For all this he became known everywhere.

When the Sun of Truth had set and the Light of the Concourse on high had ascended, Muhammad-Mustafá remained loyal to the Covenant. He stood so firm against the waverers that they dared not draw a breath. He was like a shooting star, a missile hurled against the demons; against the violators, an avenging sword. Not one of the violators so much as dared pass through the street where he lived and if they chanced to meet him they were like those described in the Qur’án: “deaf, dumb, blind: therefore they shall not retrace their steps from error!”  He was the very embodiment of: “The blame of the blamer shall not deflect him from the path of God, and the terrible might of the reviler shall not shake him.”

Living in the same manner as before, he served the believers with a free mind and pure intent. With all his heart, he assisted the travelers to the Holy Land, those who had come to circumambulate that place which is ringed around by the Company on high. Later he moved from Beirut to Iskandarún, and there he spent some time, until, drawn as if by a magnet to the Lord, detached from all save Him, rejoicing in His glad tidings, holding fast to the cord that none can sever—he ascended on the wings of the spirit to his Exalted Companion.

May God lift him up to the highest Heaven, to the fellowship of glory.  May God bring him into the land of lights, the mysterious Kingdom, the assemblage of the splendors of the mighty, all powerful Lord. Upon him be the glory of the All-Glorious.