Muḥammad showed a keen interest to learn and master this language. He moved to Qazvín, the birth place of Táhiríh, to teach at Tavakkul Bahá’í School in 1914. In 1916,  he was nominated as the official representative of the World Esperanto Movement. While in Qazvín, he had a brilliant idea of establishing a Trust Fund in which the children attending his school could save money for their future life. He called it Nownahálán Company. (Nownahálán: this is a Bahá’í term used for youngsters) – When Muḥammad presented his idea of establishing such a company during his sixty days’ pilgrimage in 1919, ‘Abdu’l-Bahá gave His blessing and even contributed two gold coins as His ‘share’ in the company! 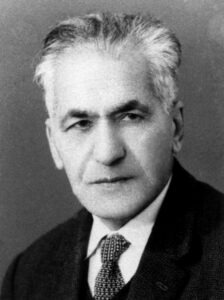 Muḥammad Labíb, the unknown photographer of the Holy Sites published in “The Dawn-Breakers”

Among millions of Bahá’ís and Bábís who lived and left this ephemeral world, there are a great number who served this Faith selflessly, achieved tremendous work then traveled to the world beyond without any recognition and often without any trace! Fortunately, Muḥammad Labíb’s name came up while collecting documents for a project on the historical sites where the Báb stayed on His route to exile from Shiráz to Tihrán.

Muḥammad’s father known as Aṭṭár (Spice dealer), was a renowned Shaykhí before he joined the Bahá’í Faith. During the upheaval of Yazd in 1903, the population rose against the large Bahá’í Community of that city and Muḥammad’s parents were an obvious target of the mob. His father was expelled from the city and his shop and home were looted and demolished. His mother was beaten to the point of death by a crowd and thrown into a dark and damp prison for three days. Muḥammad who was only nine years old had to hide inside an underground water canal for several days sitting on the shoulders of his older brother until they found refuge in a friend’s house. He moved to Tihrán in 1905 since the family could not stay in Yazd. Muḥammad attended the Tarbíyat School for boys.

In early 1900, the Esperanto language became popular amongst the Persian Bahá’ís and ‘Abdu’l-Bahá encouraged the friends to learn it. Muḥammad showed a keen interest to learn and master this language. He moved to Qazvín, the birth place of Táhiríh, to teach at Tavakkul Bahá’í School in 1914. In 1916,  he was nominated as the official representative of the World Esperanto Movement. While in Qazvín, he had a brilliant idea of establishing a Trust Fund in which the children attending his school could save money for their future life. He called it Nownahálán Company. (Nownahálán: this is a Bahá’í term used for youngsters) – When Muḥammad presented his idea of establishing such a company during his sixty days’ pilgrimage in 1919, ‘Abdu’l-Bahá gave His blessing and even contributed two gold coins as His ‘share’ in the company!

In later years, the company’s headquarters was established in Tihrán and operated for sixty-three years before it was confiscated by the current Iranian Government.

It seemed Muhammad’s keen interest in photography became apparent while onpilgrimage with his father in Haifa. Apparently, the Master had ordered a tent to be brought from India to Haifa. One day the tent was pitched near the Shrine of the Báb and some thirty pilgrims were invited to attend a feast. Shoghi Effendi was in Haifa during this period and asked permission from the Beloved Master to distribute sweets and fruits amongst the friends on behalf of the youngsters of Nownahálán Company. Late one afternoon, a photographer was called to take a photograph of the group in front of the Master’sHouse.  Muhammad noticed that the photographer took two plates, one for backup in case the first one wasn’t good.  Muhammad thought to have one of the plates with himself to keep at Nownahálán Company so he went with Shoghi Effendi to the photographer’s studio near the seashore and obtained the plate. While waiting for the photographer to come out from his lab, Muhammad spent a good deal of time studyingthe photographic equipment there.

Photographic equipment in 1919 was bulky and glass plates were used instead of film and digital sensors of today; they were fragile and difficult to handle. With the invention of Celluloid, cameras became smaller and more manageable to travel with. Nevertheless, the still cameras and film size were large and needed a large enough trunk to carry them around. By 1930 roll films and 35 mm cartridge film cameras appeared in the market and Muhammad could easily travel using smaller cameras and take photographs during his many travel teaching expeditions all over Iran. It was during 1930 and1931 that the Guardian, Shoghi Effendi, requested Effi Baker to go to Persia and photograph the historical sites related to the early history of the Faith.

Muhammad already had the insight to visit and photograph all the Holy Sites in Persia. So he had prepared an invaluable photo album of the mentioned sites and was quite familiar with dangerous and hard to reach areasof the country. Later he prepared a detailed manuscript of over a thousand pages explaining the location and specific architectural details of all important Bahá’í sites associated with the Central Figures of the Faith.

1922 while attending a public talk given by Hyde Dunn in Melbourne. It was during her nineteen days’ pilgrimage at the Holy Land in 1926 that Shoghi Effendi requested Effi to travel to Persia and take photographs of the Bahá’í Holy sites for His translation of the Dawn-Breakers. The Guardian was himself a keen photographer who took the 1919 photo of the Greatest Holy Leaf included as the frontispiece of Bahá’í World Volume V. Two or three days prior to her departure from Haifa, the Guardian mentioned that he wished Effie to photograph “as many relics of the Báb” as possible. She realized that it was necessary to take a second camera with her, one for wide shots and the other for close shots. The two cameras were Kodak No. 1 Autographic which used medium format Black and White roll films (6×9 cm).

Muhammad was the natural choice of the National Spiritual Assembly of Persia to accompany Effi Baker on her arduous and dangerous task. It took eight months to travel from North to South and East to West of that vast country to cover the most important locations. Some of his photographs along with the ones taken by Effi, illustrate the pages of Nabil’s Narrative, the Dawn-Breakers.

Following a dream and encouraged by the Master, ‘Abdu’l-Bahá, Muhammad traveled to Japan and settled in Hiroshima, 44 years after his pilgrimage. He taught Esperanto there and used that language as his only means of communication with friends. He managed to establish the first Local Spiritual Assembly in that city in 1955. Later in 1963 he pioneered to Rhodes Island and taught the Faith there. Esperanto was the only language he used during most of his pioneering!

Muhammad is the author of a large number of works dealing with the history of the Faith and copiously illustrated with his photographs. ‘The Seven Martyrs of Hormozak’ in the only book which is translated into English and published in 1981.

Although blind and physically infirm during the last years of his life, Muhammad Labib retained an active mind until his passing on March 14, 1981. A cable from the Universal House of Justice dated March 23 eulogizes Muhammad’s many services to the Faith: