It was Paule who travelled to New Jersey from Quebec and introduced me to the Faith as we fell in love with one another. Paule was originally French Catholic born in Algeria, but then was kicked out when Algeria got its independence from France in 1962. Paule became a Bahá’í in France, then moved to Canada in 1968. 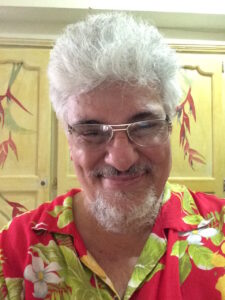 I was born Mourad Barakat, which means the desired one and blessed. I legally changed my name upon entering the USA to Moro and Baruk as my family felt Americans are bound to mispronounce our name. My family is Karaïte Jewish, a sect that rejects both Talmuds and abides by the original text in the Torah. Kara’ite Jewish has its own traditions and rituals. My ancestors have been in Egypt as far back as the 13th Century and families intermarried with other Karaïtes from Turkey and Russia.

Our fate in Egypt is similar to the rest of all the Jews from the Middle East, as we were victims 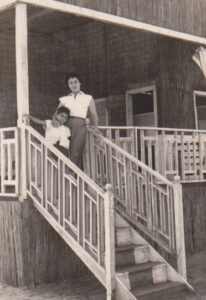 of religious fanaticism. Some were expulsed and others had no other choice than to leave their homeland. My sister and her husband left a few years before us and went to the USA via France.

My parents and I left in 1963 with a LAISSEZ PASSER (travelling documents for stateless) With a one-week visa in Switzerland, we were able to get emigrant visas to Italy where we lived until 1968, the year we emigrated to the USA.

My Italian fashion designer diplomas had no value in the USA; although I took a few counterpart diplomas, I didn’t pursue that field and worked instead as a salesman. In 1974, I became a US citizen, met the love of my life, Paule and became a Bahá’í, all this within a span of 5 months. (The name Paule is the feminine French counterpart of Paul.) 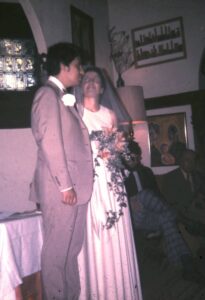 It was Paule who travelled to New Jersey from Quebec and introduced me to the Faith as we fell in love with one another. Paule was originally French Catholic born in Algeria, but then was kicked out when Algeria got its independence from France in 1962. Paule became a Bahá’í in France, then moved to Canada in 1968. Our courtship lasted 3 months and we were married September 22, 1974. We lived in North Plainfield to help save an LSA then to Plainfield to help establish another. A year later we moved to Tucson, then South Tucson for the same reason.

While in Tucson, my wife worked and I attended college. We opened the Faith in the the Papago (Tohono O’odham) Indian Reservation of San Xavier del Bac which is South of Tucson, by enrolling Mrs. Chepa Franco and her family. We continued teaching the Native Americans and formed the first LSA in the main village of Sells Papago Reservation.

My wife and I were on the Southern Arizona District Teaching Committee (DTC) when the 5 Year Plan was drawing to a close in 1978. South Arizona was one of the worst areas in regards to the goals of the Plan. NTC invited Counsellor Hedayatoullah Ahmadiyeh who was an outstanding teacher of the Faith and who developed what is known today as the red teaching book, to help win the goals. His friends Vahid Hedayati and John Cook came to Tucson to talk to the Friends. Prayers were said and plans were formulated. We formed a travelling team made up of most of the members of our DTC and a few other friends who joined for limited periods.

We travelled for 3 months throughout our District trying to revive inactive areas, teaching new 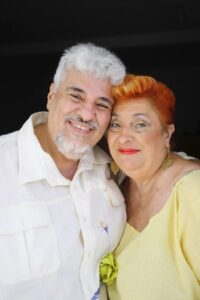 people and forming LSAs wherever we could. Our efforts were crowned with unprecedented success. The whole area was galvanized, the friends increased their teaching efforts everywhere they lived, the Fund met all its goals plus more. At the end of the campaign life was no longer the same.

It was very difficult for Paule and I to resign and return to work and or school after having given all we had for the Cause. Only one alternative remained, travelling abroad and filling an urgent international goal.

Prior to the teaching campaign, we both applied for scholarships. At the end of the campaign we both received our scholarships, Paula for beautician school and I for a full scholarship for the University of Arizona. It was useless to dwell on that. Serving Bahá’u’lláh always took precedence in our decisions and we have always been united on that subject. So we headed for Haiti in March 1979.

Teaching the Faith has always been our passion.

Although we were penniless when we came to Haiti, today we have prestige, notoriety and success in our business. We live in our own home in Jacmel, Haiti. I started the craft industry in 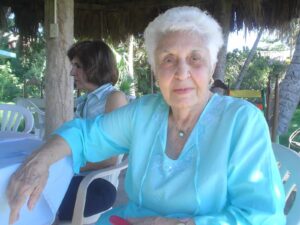 Jacmel in 1985 and today Jacmel’s craft is recognized as a UNESCO World Heritage.

My mother, Nelly Baruk, then a widow, became a Bahá’í in 1990, moved to Jacmel a year later and passed away in 2010 and is buried in Jacmel. Her home was the watering hole of most of the Bahá’í activities in the area, and many people joined the Faith in her house.