He was singled out from his fellows, head and shoulders above the rest. When still a child, he learned of the Lord’s Advent, caught fire with love, and became one of those who “gave their all to purchase Joseph.” 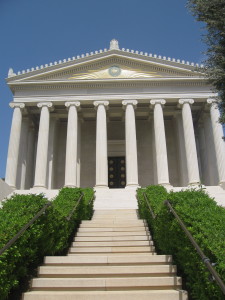 This honored man, Mírzá Mihdí, was from Káshán. In early youth, under his father’s tutelage, he had studied sciences and arts, and had become skilled in composing both prose and verse, as well as in producing calligraphy in the style known as shikastih.  He was singled out from his fellows, head and shoulders above the rest. When still a child, he learned of the Lord’s Advent, caught fire with love, and became one of those who “gave their all to purchase Joseph.” He was chief of the yearning seekers, lord of lovers; eloquently, he began to teach the Faith, and to prove the validity of the Manifestation.

He made converts; and because he yearned after God, he became a laughingstock in Káshán, disparaged by friend and stranger alike, exposed to the taunts of his faithless companions. One of them said: “He has lost his mind.” And another: “He is a public disgrace. Fortune has turned against him. He is done for.” The bullies mocked him, and spared him nothing. When life became untenable, and open war broke out, he left his homeland and journeyed to Iraq, the focal center of the new Light, where he gained the presence of all mankind’s Beloved.

He spent some time here, in the friends’ company, composing verses that sang the praises of Bahá’u’lláh. Later he was given leave to return home, and went back to live for a while in Káshán. But again, he was plagued by yearning love, and could bear the separation no more. He returned, therefore, to Baghdad, bringing with him his respected sister, the third consort.

Here he remained, under the bountiful protection of Bahá’u’lláh, until the convoy left Iraq for Constantinople, at which time Mírzá Mihdí was directed to remain behind and guard the Holy House. Restless, consumed with longing, he stayed on. When the friends were banished from Baghdad to Mosul, he was among the prisoners, a victim along with the others. With the greatest hardship, he got to Mosul, and here fresh calamities awaited him; he was ill almost all the time, he was an outcast, and destitute. Still he endured it for a considerable period, was patient, retained his dignity, and continually offered thanks. Finally he could bear the absence of Bahá’u’lláh no longer. He sought permission, was granted leave to come, and set out for the Most Great Prison.

Because the way was long and hard, and he suffered cruelly on the journey, when he finally reached the ‘Akká prison he was almost helpless, and worn to the bone. It was during the time when the Blessed Beauty was imprisoned within the citadel, at the center of the barracks. Despite the terrible hardships, Mírzá Mihdí spent some days here, in great joy. To him, the calamities were favors, the tribulations were Divine Providence, the chastisement abounding grace; for he was enduring all this on the pathway of God, and seeking to win His good pleasure. His illness worsened; from day to day he failed; then at the last, under sheltering grace, he took his flight to the inexhaustible mercy of the Lord.

This noble personage had been honored among men, but for God’s love he lost both name and fame. He bore manifold misfortunes with never a complaint. He was content with God’s decrees, and walked the ways of resignation. The glance of Bahá’u’lláh’s favor was upon him; he was close to the Divine Threshold. Thus, from the beginning of his life till the end, he remained in one and the same inner state: immersed in an ocean of submission and consent. “O my Lord, take me, take me!” he would cry, until at last he soared away to the world that no man sees.

May God cause him to inhale the sweet scent of holiness in the highest Paradise, and refresh him with the crystalline wine cup, tempered at the camphor fountain.  Unto him be salutations and praise. His fragrant tomb is in ‘Akká.