She wrote countless letters and found joy in providing personally for the comfort of each student. The place was scrubbed to spotlessness as dust and Louise could never dwell in the same room. She was truly a perfectionist. She always remembered her "charges" and corresponded endlessly to guide them further in the Teachings. 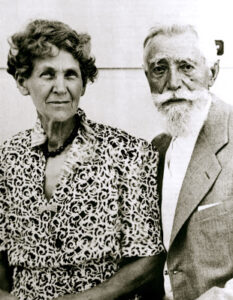 Little is known of her childhood days, as she always thought “Louise” was a minor subject. In later years she seemed happiest when talking with others about the “Oneness of God, the oneness of the Prophets, and the oneness of mankind.” Can you not visualize her as a studious, loving and yet merry little lass? In April, 1889, courageous Louise landed in New York and soon began the study of homeopathic medicine.

In 1901 she met Miss Fanny S. Montague of Dobbs Ferry, New York, who introduced her to the Bahá’í Faith. She also studied fervently at Green Acre underthe guidance of Miss Sarah J. Farmer. Soon she became engaged to Dr. Wm. Moore, brother of Lua Getsinger and together thev made plans to live a life of service and administering homeopathic remedies in the Southern States. To her great sorrow he contracted yellow fever and passed on before she could join him there.

Subsequently she met the beloved May Maxwell and accompanied her to Haifa in 1909 where she came into the presence of  ‘Abdu’l-Bahá; this to her was the greatest of honors. Her great love for May Maxwell is a story in itself. In her notes may be found a significant quotation:  “I cannot speak of the great benefits to my life and the transformation Iexperienced through the association of May Maxwell.”

While strolling in the gardens one day, Louise expressed to ‘Abdu’l-Bahá her great desire to rise to the heights of spiritual knowledge. She asked fervently: ” ‘Abdu’l-Bahá, what can  I do to attain this?’ He gazed at her fondly and replied “Give me thy heart.” She dedicated her life to fulfilling this inspiring request. Upon her return to America she obtained employment in the medical department of the Briarcliff Manor School in New York. She was also privileged to care for Ruhiyyih Khanum when she was a child. A momentous event occurred when Dr. Getsinger persuaded Louise to write to John Bosch, a fellow countryman in California. 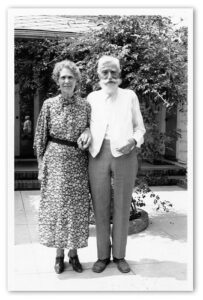 On January 19, 1914, Louise Stapfer and John David Bosch were wedded in San Francisco. To this union there was “born” one glorious “child”-the Geyserville Bahá’í Summer School. They nurtured it with fervent prayers, steadfast-devotion and unceasing service until their physical beings were no more on this plane. John and Louise had a happy life together. Many are the anecdotes each, with a little twinkle in the eyes, could relate of the other. John never could lavish worldly riches on his Louise, for she always managed to encounter some one more needy to whom to pass on her possessions. As his bride, John gave her five hundred dollars to spend as she wished. She made haste to send it to the Temple fund.

In the little village of Geyserville, Louise and her little basket of various small gifts and remedies will remain a memory to the townsmen. Just as ‘Abdu’l-Bahá’s gift of a rose would be transformed into a priceless gem-so it was with Louise as she left a smile here, a word of encouragement there, perhaps a needed homeopathic remedy or a bit of spiritual knowledge. To compensate for having no child of her own, for she loved children, she gave her all to the Cause of Bahá’u’lláh and especially to the Geyserville School.

Louise fully realized that the New World Order must penetrate even the most remote regions of the world. Having studied diligently ‘Abdu’l-Bahá’s Divine Plan she and John set sail for Tahiti in the spring of 1920. Remaining there for five months, they planted the seed. As ‘Abdu’l-Bahá wrote,

“Thou art sowing a seed that shall in due time give rise to thousands of harvests.”

Upon their return from the South Seas they began to plan for a pilgrimage to Haifa. On the way they toured Germany, France, Switzerland and Italy, where they did extensive teaching, and arrived in Haifa just fourteen days before ‘Abdu’l-Bahá passed away on November 28, 1921. However, they remained for forty days and had the great honor of bringing the first copy of  ‘Abdu’l-Bahá.s Will and Testament, given them by Shoghi Effendi, to the National Convention in 1922.

During the years Louise came to realize the great need for teachers and that a school on the Bosch property would be of the greatest of service. John had already written to ‘Abdu’l-Bahá: “…May this simple place on the hill be dedicated to the universal spirit of the Teachings of Bahá’u’lláh. May it be a Mashriqu-l-Adhkár, although it be not of grandeur in appearance but only a place of utmost simplicity for traveling souls to rest in and to partake of the spirit as it is given.  I pray that the atmosphere here may henceforth be filled with true spirituality and power, and that we may be guided by the strong hand of the Almighty so that this place may be a natural source of pure water for the believers to drink from and for all good hearts who are earnestly seeking for enlightenment.”

Plans materialized and in August 1927, under the Big Tree the first Western Bahá’í Summer School was held. John was a staunch supporter of the driving forces in Louise and gave generously of his wealth for propagating the Cause of God; without her determination the Summer School could not have been realized, She sacrificed her whole being for it. In 1933 Shoghi Effendi wrote her,

“…the work you have initiated in collaboration with Mr. Bosch is a historic achievement, an example to the Bahá’í communities in other lands, a source of future blessings and an added evidence of the mighty and glorious spirit that animates you both in the service of our beloved Cause. Strive, that every passing year may witness a fresh advance in the extension of its scope, the spread of its influence and the consolidation of its foundation.”

She wrote countless letters and found joy in providing personally for the comfort of each student. The place was scrubbed to spotlessness as dust and Louise could never dwell in the same room. She was truly a perfectionist. She always remembered her “charges” and corresponded endlessly to guide them further in the Teachings. Her torch kindled the flame of friends and teachers from East, West, North and South.

Many believers brought their contacts to blessed Louise, and through her great warmth, love and understanding, their confirmation would be achieved. In 1913 ‘Abdu’l-Bahá wrote a Tablet to her,

“Oh thou daughter of the Kingdom: Thou art one of the old believers and belongest to the firm and steadfast maidservants of the Kingdom. Therefore in the estimation of  ‘Abdu’l-Bahá thou art favored. Thank God that thou art firm in the Covenant and hast turned thy face toward the Kingdom of Abha. I hope from the bestowals of Bahá’u’lláh that He may so enkindle thee as to move that region, that enkindle thee as to move that region, that thou mayest unloose thy tongue in guiding the people and attract the souls to His Holiness Bahá’u’lláh.”

To tell more of the life of Louise Bosch would be to repeat the account of the life of John Bosch so ably presented in The Bahá’í World, Volume  XI. They were the rarest of teams-one supported the other, the lacks of one supplemented by the other. This magnificent marriage was indeed “made in Heaven.” Without John’s wise counseling the perseverance of Louise would have been as a ship without a captain.

Before the visit of ‘Abdu’l-Bahá to America, He issued a Tablet in which he declared that the Bahá’ís must pave the way for His coming by showing great love and unity to one another. He said, “Love is the greatest of all living Powers.” Louise fully understood and had the rare quality of being able to express her love to all Bahá’ís. She also loved the Guardian and had a devoted comprehension of his station; she constantly emphasized it to the friends. During her later days, when her physical and mental faculties ebbed away, the qualities of her soul proved themselves, for she was more than ever the sweetest and most lovable Louise.

Mamie Seto and Arthur Dahl paid her homage, thus closing a chapter in Bahá’í history concerning two great souls, Louise and John. She was laid to rest atop a hill, alongside John, overlooking the valley they both loved so well. The chapter is closed but the book will go on and their child, the Geyserville School, will continue to train teachers and send forth pioneers to all nations, peoples and creeds until there is but One World, and the brotherhood of man is established, as a result of the devotion and sacrifice of all the great souls like John and Louise Bosch.

“The Maid Servant of God, Louise,” wrote ‘Abdu’l-Bahá in 1904,”0 thou who art advancing towards God! Verily the Cause is great and the Lord is Merciful and Clement. Trust in the Grace of Thy Lord, and be firm in love for Him who has created thee and made thee. The veils shall be removed, the shining lamp shall beam, the clouds shall be dispelled, the lights of the Sun of love shall appear on the horizons and God shall grant thy wishes and give thee the power of deeds.

“It is incumbent uponthee to depend wholly upon the Center of Lights, and call out for love, universal peace and harmony amongst the people in the East of the earth and its West, so that the foundation of rancor may be destroyed and the edifice of love and faithfulness be set up, and that the heavenly powers may govern the mortal sentiments and the merciful feelings may become manifest in the human realities: This is becoming of those maid-servants of God, who are attracted to that Beauty which is shining from the Horizon of the Kingdom of God upon the world. “Upon thee be greeting and praise.”