In 1977 it seemed ripe to form a band. After having many years of success as studio recording musicians they decided to form the band Toto initially formed by drummer Jeff Porcaro and keyboardist Steve Porcaro. Then in 1982 Mike replaced the original bass player. While touring with Seals and Crofts, Mike encountered the Bahá’í Faith. Dash Croft’s recalls: ‘Mike Porcaro toured with us and he was influenced by our meetings with other Bahá’ís.' 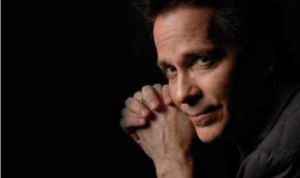 Michael Porcaro was the second of three brothers raised in a musical family. Joe Porcaro an Italian-American was a famous drummer who moved to Los Angeles with his family to pursue his musical career. Joe recorded with Natalie Cole, Gladys Knight, Madonna, Pink Floyd, Frank Sinatra and many others. He was one of the founders of the Los Angeles Music Academy (LAMA) in Pasadena, California, which is now called the Los Angeles College of Music (LACM).

Michael had two brothers Jeff and Steve, they were all taught drums by their father at his drum shop every weekend. Jeff said that he himself wasn’t the best drummer, adding that Mike was a better player than him before he switched to bass, while Steve later took up piano before they moved to California. Jeff explained that when the brothers took guitar lessons, Mike excelled while Jeff gave up after three lessons, and since the family had only one drum kit and one bass, Mike was assigned the bass.

It is well known that the Toto family was more than a band. The band consised of the three Porcaro brothers, David Paich and Steve Lukather – future band keyboardist and guitarist – all attended Ulysses S. Grant High School, in the San Fernando Valley. After school they took refuge in the soundproof mini-studio set up by Joe Porcaro at home to play and dream of glory. Growing and playing together since adolescence creates an inseparable bond on a human level and a very strong artistic understanding, and the Toto represented a unique example in this sense in the music business. Every member of the band, had largely laid the foundations of their career by collaborating with various artists and cutting bones both in the studio and live during the 1970s (Mike toured with Michael Franks, Seals and Crofts, Larry Carlton, and Boz Scaggs). In 1977 it seemed ripe to form a band. After having many years of success as studio recording musicians they decided to form the band Toto initially formed by drummer Jeff Porcaro and keyboardist Steve Porcaro. Then in 1982 Mike replaced the original bass player. While touring with Seals and Crofts, Mike encountered the Bahá’í Faith. Dash Croft’s recalls: ‘Mike Porcaro toured with us and he was influenced by our meetings with other Bahá’ís.’ 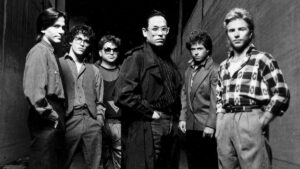 Mike was a Toto band member for a quarter of a century, composing, recording and playing live around the globe, overcoming the piercing moment of the death of his beloved brother Jeff, who died at the age of 38 from a heart attack in 1992.

The band enjoyed great commercial success in the late 1970s and 1980s, beginning with the band’s eponymous debut released in 1978. With the release of the critically acclaimed and commercially successful Toto IV (1982), Toto became one of the best-selling music groups of their era.

The band released 17 studio albums and was honored with several Grammy Awards and inducted into the Musicians Hall of Fame and Museum in 2009. As a band, Toto has sold over 40 million albums. 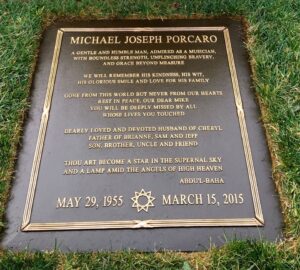 Porcaro stopped performing with Toto in 2007 after experiencing a growing weakness in his fingers that was making it increasingly difficult for him to play. He was replaced by Leland Sklar for the remainder of the tour. In February 2010, it was announced via official press release that Mike Porcaro was suffering from amyotrophic lateral sclerosis (ALS)–a terminal illness that causes the degeneration and death of the motor neurons that control the voluntary muscles of the body.

A drummer named Jimmy who had the chance to play with Mike wrote the following:

‘I had the distinct honor of getting to know Mike Porcaro and the inexplicable joy of performing on a couple records with him including the little record by that Latin guy. Some of you might have heard it. Santana! I was introduced to Mike through some mutual friends on a buddy’s session. Mike Porcaro was a Bahá’í. Why do I mention that? Well, Mike had a way of making you feel like you were family from the second you met him.…His groove and musicality were just like his brothers, deep and profound. 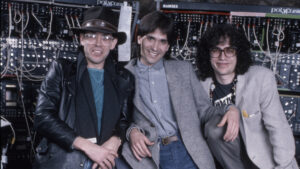 The first session I did with him he insisted on sitting out in the room with me. He wanted to feel the drums. It was impossible to not find the perfect pocket. But back to why I mention the Bahá’íthing. You see, Bahá’ís believe in unity. It is an inclusive religion requiring self investigation and understanding of all religions as well as embracing science. To be a Bahá’írequires a certain responsibility… Mike had a power in his step. He commanded a room without being intrusive. You always felt like he knew something that you didn’t. He was fine with being quiet and unafraid of speaking openly and with necessity. Musicians will go on about his generosity both as a person and a musician, full of information and aching to share it. His natural person was this but it was his education as a Bahá’íthat nurtured this and gave him his purpose.

“I got to play with Mike Porcaro! How lucky am I!”

Vargha Mazlum has been Involved in music and media for over 30 years, first as a singer/violinist in the musical band Light in the Darkness and then as a producer in China and Italy. Recently more involved in video/film development, historical research, editing and directing. His documentaries explore the lives of prominent historical Baha'is.