Bahram Seroosh Rawhani defended his faith. Not much has been written about him only about the activity that led to his martyrdom. He had a Parsi background, also spelled Parsee which is a member of a group of followers in India of the Persian prophet Zoroaster. The Parsis, whose name means "Persians", are descended from Persian Zoroastrians who emigrated to India to avoid religious persecution by the Muslims. 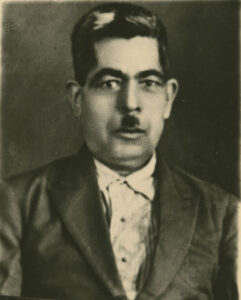 In March 1951, in Yazd, a young man was discovered dead in a desolate part of the town. A few enemies of the Bahá’í Faith spread false rumors to the effect that the boy had been murdered by Bahá’ís.

They placed his body in a coffin and carried it around the town lamenting the death of the youth and speaking vehemently of the cruel deed of the Bahá’ís. While this incident was taking place, two men who were members of the Faith, were severely beaten in a neighborhood shop because of their religious affiliation with the Bahá’í group.

At the same time another group of enemies of the Faith went about the town of Taft destroying the gardens and damaging the homes of Bahá’ís. One Bahá’í with a Parsi (Persian Zoroastrians) background, named Bahram Seroosh Rawhani, complained to the police about these persecutions. On the way back to his home that night he was attacked with knives and martyred  by enemies of the Faith.