Linda’s dedication to the Bahá’í Faith and her continuous acts of kindness and service are influential and inspiring. Her realization of Bahá’u’lláh and her generosity to dedicating her life in this path has made such an impact. Linda started her television career in the 1960s. She studied at M-G-M Studios, Universal Studios, and others. She was the star of My Three Sons, appeared on many national American television programs such as the Dick Van Dyke Show, Perry Mason, Tammy, Tammy and the Millionaire, Hazel, The Girls on The Beach, and so many others. 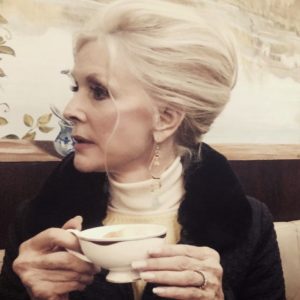 Linda Marshall Youseffian’s contribution to the Bahá’í community throughout Europe and Asia has affected many globally. Her contributions within her hometown in Italy encourages and empowers women on moral education, spiritual enhancement, social development, the arts and academia.

She is one of two children. She grew up in Dallas later attended the University in Colorado and studied English Literature and worked as a dramatic actress, working in Shakespearean productions and summer theatres as a leading actress before beginning in Television and films in California and New York.

Linda started her television career in the 1960s. She studied at M-G-M Studios, Universal Studios, and others. She appeared in My Three Sons as well as many national American television programs such as the Dick Van Dyke Show, Perry Mason, Tammy, Tammy and the Millionaire, Hazel, The Girls on The Beach, and so many others. 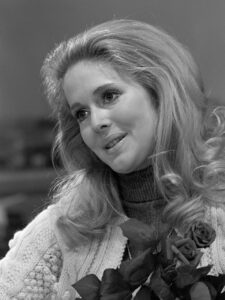 Linda first heard about the Bahá’í Faith while she was living in West Hollywood, California through a very dear friend of hers from high school. She took Linda to a fireside at Mr. Russ Garcia’s home and she immediately recognized the divine spirit she had been looking for all her life. In her early 20s Linda became a Bahá’í and began travel teaching extensively in the United States. Everyone who was in her presence were soon warmed to her innocence and purity. She was admired for her dedication and her tenacity to take part of Bahá’u’lláh’s vision and felt impelled, a sense of responsibility to do all she could to teach the Faith. 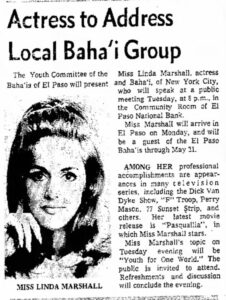 Europe. It was in 1968, while attending the Bahá’í Palermo conference in the Mediterranean where she met Sohrab Youseffian a Persian who was living in Italy. They married and had four children: Jalan Alexander Youssefian Sahba, Sharim Angeline Youseffian Afnan, Amy Victoria Youssefian Sahba and Shidan Faizi Youssefian. All her children are active in the Faith and live in various parts of the world: Nairobi, Kenya; Boston, MA; Costa Rica and their son who spent 8 years in China, 2 years in Singapore and is now living in New York City for his work and services.

Linda’s younger sister, Susan Ann Marshall Cunningham visited Linda while she was in New York City and met an elderly lady who had been with ‘Abdu’l-Baha. By only looking into her celestial blue eyes was her sister’s heart stricken with recognition and declared herself a Bahá’í a while later.

Linda’s parents never officially became Bahá’ís but their lives changed dramatically in a wonderful way when Linda became a Bahá’í . According to Linda, “My mother was naturally upset when I accepted the Faith as she knew nothing about it and was living 1500 miles away from California….until one day while visiting me she saw the photo of ‘Abdu’l-Baha and said “That’s him!  He saved my life.”  She had had a marvellous dream of Him years before when he literally saved her life and instantly recognized Him.  Many things similar to this happened to my father.”

The National Bahá’í office asked Linda to go travel teaching throughout Europe, speaking on television, in Universities, Public Meetings, Hospitals, Prisons, Press Conferences, and meeting government officials and leaders in almost all of the European countries by presenting the Proclamation of Bahá’u’lláh etc. Also travel teaching in such countries as India, Iran (Meeting only with the Bahá’ís), Hong Kong, and most recently she travelled to Turkey, Greece, Hungary, Rumania, Albania, Russia, and surrounding countries.

Her tenacious and femininity while subtle her spirit is vibrant and served on several committees such as the Italian National Education Committee for over 10 years, the National Pioneering Committee, the planning Board for Landegg Academy, as an Assistant, and many others.

If that wasn’t enough she continues to be active in organising Women’s meetings in Italy, she has organized and directed many week-end institutes for youth and junior youth, encouraging them in their roles as young Bahá’ís of today and inspiring and empowering them to become the future world citizens that our world requires.

The dictation of her life has been interwoven and thematically laid out from such an early age her every thought and act has been service to the Bahá’í Faith. For 10 years she served on the European Task Force for Women, which developed seminars dealing with Encouragement, Transformation and Service for all the European countries.

These seminars began in 1995 and were presented in Moscow which led to a very special project in June in Krasnodar, Russia where a seminar, ‘Becoming Ensigns of Peace’ transpired for

Linda served on the Bahá’í Council for 10 years for the North of Italy, assisting with EBWN, European Bahá’í  Women’s Network, a European women’s website for the exchange of news and information, and worked on the creation of a Baha’i-inspired European women’s association entitled, VISION.

over 300 non- Bahá’í women who attended from Cecenia, Georgia, Azerbeijan, Cuba, to name a few.

A few months later in October 1995 the Task Force held a week of activities for women in over 20 cities of Italy, ‘Donne per La Pace’ – ‘Women for Peace’ which culminated in the central piazza of each city where ‘Words for Peace’ were read and a letter was sent to the United Nations by hundreds and thousands of European women asking for an international meetings of the worlds leaders in order to lay the basis for world peace.

She served as the Institute Coordinator for the North of Italy and is presently serving as National Coordinator for Ruhi Books 8 and 9, having also presented this in Sweden and is assisting with other countries.

‘O thou who hast set thy face towards the splendors of My Countenance! Vague fancies have encompassed the dwellers of the earth and debarred them from turning towards the Horizon of Certitude, and its brightness, and its manifestations and its lights…”

Her quote epitomizes her life, a blueprint if you will. Many women aspire to follow Linda’s footsteps and she continues to leave an indelible imprint on us.