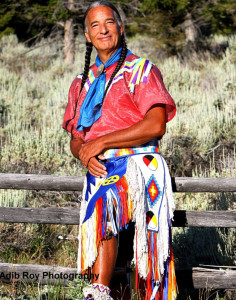 Kevin Locke is an internationally-recognized master traditional folk artist, visionary hoop dancer, indigenous Northern Plains flute player/recording artist, cultural ambassador and an educator. A citizen of the Standing Rock Sioux Tribe, he self identifies as a World Citizen. He is one of the former members of the National Spiritual Assembly of the Bahá’ís of the United States, and an Auxiliary Board Member for Propagation.

During his childhood and early youth, his family moved frequently taking residence in various states including CA, MT, AK and VA. Not until 1969 did he start taking primary residence in Standing Rock, Wakpala SD, living with his great uncle. Continuing the language revitalization initiatives of his mother Patricia Locke, he currently serves on the Board of Directors of the Lakota Language Consortium (http://lakhota.org/), one of the world’s most successful Indigenous language renewal organizations. Although Kevin is not formally trained in music he was particularly encouraged by Richard Foolbull, one of the last indigenous flute players of this genre, to learn the traditional songs. Because of his long-standing dedication, Kevin is recognized as one of the last people alive who has in his possession an extensive repertoire of this unique genre of vocal compositions that are instrumentalized on the flute.

In his mid twenties Kevin came in contact with the hoop dancer, Arlo Goodbear, who promised to give him four lessons, and he was told that if he does his part, this dance will take him many places where he will meet diverse peoples. Tragically after the first lesson Arlo Goodbear passed away unexpectedly and Kevin was called to fill his place on a performance tour to the continent of Africa. Arlo Goodbear appeared to him in his dreams and completed the remaining lessons before the trip, a trip that Kevin recounts as one of the most memorable in his hoop dancing career as it set the foundation for his service path in life. Coincidentally around the same time, Kevin became a Bahá’í, a Faith that he first heard of when he was a young boy that reappeared in his life through his fellowship with some Bahá’í pioneers to the Dakotas. In particular, after a traditional Lakota fast, he felt his prayers were answered and he found solace in the Writings of the Faith ever since.

His newfound Faith put his service path in clear focus for Kevin, that of using folk arts to emphasize universal themes that are integral to all peoples. Universality of human spirit, its inclination towards peace, balance, harmony, and a longing that all human beings have for the Divine Springtime are a few central themes that he displays in his hoop dance routine, which is essentially a prayer for the unification of all mankind. Using his folk arts as a vehicle, Kevin has toured in over 90 countries to date and shared this prayer with children and adult alike ranging from 50 to 55,000 people at a time. Even though he has performed in many prestigious venues to innumerable dignitaries such as Nelson Mandela and Dalai Lama, his favorite audience continues to be children and youth. Kevin’s primary goal is to contribute towards an emerging global civilization drawing from his individual talents and ancestral heritage until the end of his earthly life.

Some of Kevin’s accomplishments and awards include:

Editor’s Note:
Special thank you to Ceylan Isgor-Locke for providing this video on Land Acknowledgment Centered on Spiritual Reality:
https://www.youtube.com/watch?v=sQojPD_hb4o

Ceylan Isgor, PhD is an Associate Professor in College of Medicine at Florida Atlantic University, Boca Raton FL. She is a neuroscience researcher in the field of drug addiction and adolescent brain development.