Locke taught and lectured for more than forty years and worked to protect sacred Indian sites. She won a MacArthur Foundation fellowship for her lifelong work to preserve indigenous North American languages. 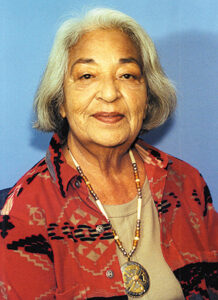 She was born Patricia Ann McGillis on the Fort Hall Indian Reservation in Idaho in 1928, and of the Lakota and Chippewa heritage.  Locke’s Indian name was Tawacin Waste Win, which according to her daughter means “she has good consciousness-compassionate woman.”

She was a ground-breaking worker for the education of American Indians and played a leading role in the founding of seventeen tribally run colleges in the United States. She was also an influential advocate for the passage of federal laws increasing Indian tribes’ autonomy over their children’s education. Locke taught and lectured for more than forty years and worked to protect sacred Indian sites. She won a MacArthur Foundation fellowship for her lifelong work to preserve indigenous North American languages. [1]

Patricia Locke developed policies, procedures and education codes for Indian communities in several regions of the country. She co-chaired the United States Department of Interior Task Force on Indian Education Policy and helped develop a Bureau of Indian Affairs Mission Statement and policies that were written into statute. [2]

She was an active advocate for the American Indian Religious Freedom Act of 1978, which guaranteed Native Americans the right to freely practice their spiritual traditions, and was a strong voice for tribal independence in deciding how and what Native American children should study. She became instrumental in starting Native American run colleges and developing educational curricula on reservations across the country. [2]

Locke’s son, Kevin, joined the Bahá’í Faith in 1979. Patrcia Locke became a member of the Faith later in life and became the first Native American Indian woman elected to serve on the National Spiritual Assembly of the Bahá’ís of the United States. She served on the Assembly from 1993-2001 and in 2001, she was Vice Chairman. [1]

In 2005 she was one of ten women inducted into the National Women’s Hall of Fame.

Editor’s Note:
Special thank you to Kevin Locke (son) who provided the dates of birth and the date of her ascension. Kevin added that his mom was living at her home in Wakpala, SD and went on a weekend trip to the San Carlos Apache Reservation when her diabetic condition spiraled out of control.
Special thank you to Ceylan Isgor-Locke for providing this video on Land Acknowledgment Centered on Spiritual Reality:
https://www.youtube.com/watch?v=sQojPD_hb4o