During all that time Husayn-Áqá never offended a soul, nor did anyone, where he was concerned, utter a single complaint. This was truly a miracle, and no one else could have established such a record of service. He was always smiling, attentive as to the tasks committed to his care, known as a man to trust. 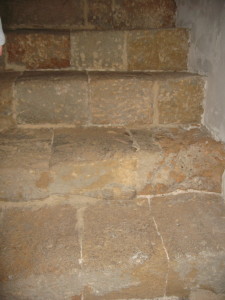 This man who was close to the Divine Threshold was the respected son of ‘Alí-‘Askar-i-Tabrízí. Full of yearning love, he came with his father from Tabríz to Adrianople, and by his own wish, went on with joy and hope to the Most Great Prison. From the day of his arrival at the fortress of ‘Akká he took over the coffee service, and waited upon the friends. This accomplished man was so patient, so docile, that over a forty-year period, despite extreme difficulties (for day and night, friend and stranger alike thronged the doors), he attended upon each and every one who came, faithfully helping them all. During all that time Husayn-Áqá never offended a soul, nor did anyone, where he was concerned, utter a single complaint. This was truly a miracle, and no one else could have established such a record of service. He was always smiling, attentive as to the tasks committed to his care, known as a man to trust. In the Cause of God he was staunch, proud and true; in times of calamity he was patient and long-suffering.

After the ascension of Bahá’u’lláh the fires of tests leaped up and a whirlwind of violation battered the edifice down. This believer, in spite of a close tie of kinship, remained loyal, showing such strength and firmness that he manifested the words: “In the Cause of God, the blame of the blamer shall he not fear.” Not for a moment did he hesitate, nor waver in his faith, but he stood firm as a mountain, proud as an impregnable citadel, and rooted deep.

The Covenant-breakers took his mother away to their own place, where her daughter lived. They did everything they could think of to unsettle her faith. To an extent beyond belief, they lavished favors upon her, and plied her with kindnesses, hiding the fact that they had broken the Covenant. Finally, however, that respected handmaid of Bahá’u’lláh detected the odor of violation, whereupon she instantly quit the Mansion of Bahjí and hurried back to ‘Akká. “I am the handmaid of the Blessed Beauty,” she said, “and loyal to His Covenant and Testament. Though my son-in-law were a prince of the realm, what would that profit me? I am not to be won over by kinship and displays of affection. I am not concerned with external tokens of friendliness from those who are the very embodiment of selfish desire. I stand by the Covenant, and I hold to the Testament.” She would not consent to meet with the Covenant-breakers again; she freed herself completely from them, and turned her face to God.

As for Husayn-Áqá, never did he separate himself from ‘Abdu’l‑Bahá. He had the utmost consideration for me and was my constant companion, and it followed that his passing was a formidable blow. Even now, whenever he comes to mind I grieve, and mourn his loss. But God be praised that this man of God, in the days of the Blessed Beauty, remained at all times in close proximity to His House, and was the object of His good pleasure. Time and again, Bahá’u’lláh was heard to comment that Husayn-Áqá had been created to perform this service.

After forty years of serving, he forsook this swiftly passing world and soared away to the realms of God. Greetings and praise be unto him, and mercy from his bountiful Lord. May his grave be encircled with lights that stream from the exalted Companion. His resting-place is in Haifa.