Haji Abu'l-Hasan Ardikani known as Haji Amin or Amin-i-Ilahi (the trustee of God). He was one of the prominent Bahá'ís of Iran and was appointed the trustee (amin) of the Huququ'llah as well as acting as a courier for conveying the letters of Bahá'u'lláh. 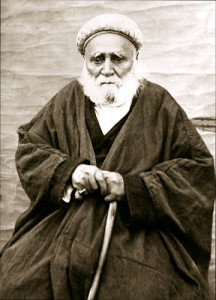 Haji Mirza Abu’l-Hasan Ardikani known as Haji Amin or Amin-i-Ilahi (the trustee of God). He was one of the prominent Bahá’ís of Iran and was appointed the trustee (amin) of the Huququ’llah as well as acting as a courier for conveying the letters of Bahá’u’lláh. He was posthumously named a Hand of the Cause of God by Shoghi Effendi and was also listed among the Apostles of Bahá’u’lláh.

Haji Amin was born in Ardikan, north of Yazd, Iran. His father was a land-owning farmer. He married the daughter of Mulla Rajab-‘Ali, one of the `ulama and notables of the town who had become a Babi around 1848. Mulla Rajab-‘Ali tried to convert his son-in-law with the assistance of his brothers but Haji Amin was at first unwilling to listen to their arguments. Eventually in about 1851, after meeting Mulla Muhammad-Rida Rada’r-Ruh, Haji Amin was convinced of the truth of the Báb.

When he read the writings of Bahá’u’lláh and heard of his claims, Haji Amin was immediately convinced and because his wife’s family were among the most respected of the Babi families, he was able to travel through Iran meeting the old Babi families and informing them and converting them to the Faith of Bahá’u’lláh.

After a time Haji Amin became the assistant of Haji Shah-Muhammad Manshadi (Aminu’l-Bayan), whom Bahá’u’lláh had entrusted with the task of collecting the Huququ’llah. This involved lengthy journeys, sometimes lasting more than a year, during which Haji Amin would travel from town to town, collecting the Huququ’llah and letters to Bahá’u’lláh. He would earn his living by trading and also by writing letters for those Bahá’ís who were illiterate.

In 1869, he traveled with the pilgrims to Mecca and arrived in Akka but was unable to enter the citadel and meet Bahá’u’lláh. He met Mirza Aqa Jan outside and handed over the money and letters that he had brought. He then returned to Iran and was the first to bring news to the worried Bahá’ís of Iran of Bahá’u’lláh’s whereabouts and of his captivity in Akka. He returned to Akka and on this occasion Bahá’u’lláh ordered Haji Amin to go to the public baths at the time that Bahá’u’lláh himself was going to make his weekly visit there. In this way, Haji Amin became the first outside Bahá’í (except perhaps Badi’) to meet Bahá’u’lláh in Akka.

In 1873, Haji Amin made another journey to Akka and again met Bahá’u’lláh. In 1875, he traveled with Haji Shah-Muhammad throughout the province of Adharbayjan and then went on to Akka. He continued along these lines until 1879 when he traveled again with Haji Shah-Muhammad to Akka, via Trabazon and Istanbul. On their return they visited the various Bahá’í communities in Adharbayjan. In the process, they got caught up in the Kurdish rebellion of Shaykh `Ubaydu’llah and Haji Shah-Muhammad was killed in Miyandu’ab, while Haji Amin was shot in the leg. He managed to reach Tabriz and spent some time recuperating.

Bahá’u’lláh appointed Haji Abu’l-Hasan as the trustee (amin) of the Huququ’llah in succession to Haji Shah-Muhammad, and it was from this time on that he became generally known as Haji Amin among the Bahá’ís. 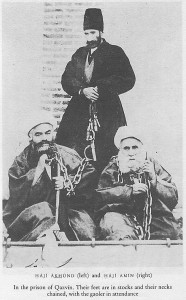 In April 1891, Haji Amin was imprisoned with Haji Akhund in Tehran. There had been increasing agitation for political reform and the Shah had decided to arrest the ringleaders. Although the Bahá’ís had nothing to do with the political agitation, the two Bahá’ís were kept in prison in Tehran and Qazvin for two years.

Upon his release, Haji Amin resumed his travels, visiting the Bahá’í communities of Iran and collecting the Huququ’llah. By this time Bahá’u’lláh had passed away and part of Haji Amin’s task was now to promote and explain the concept of the Covenant. In 1894, he began an extensive journey beginning in Khurasan and proceeding through Turkistan, Ottoman Turkey, Egypt, and Syria. From about this time, he was based in Tehran and appointed deputies in various areas to collect the Huququ’llah on his behalf.

As he grew older, his travels became less frequent. In 1911, he made another journey to visit ‘Abdu’l-Bahá in Haifa. Then in 1916, he chose Haji Ghulam-Rida, the son of Haji Muhammad-Muhsin and one of the Bahá’í merchants of Tehran, to assist him in his work as trustee of the Huququ’llah. ‘Abdu’l-Bahá approved of this arrangement and Haji Ghulam-Rida became known as Amin-i-Amin (trustee of the trustee). Haji Amin eventually moved into the house of Haji Ghulam-Rida and as he grew weaker and older, he gradually delegated all of his functions to Haji Ghulam-Rida. Haji Amin eventually died in the spring of 1928 at an age in excess of ninety. He was buried in the Bahá’í cemetery of Tehran. He left two daughters.

Images:
We Are Bahá’ís: bahaisworldwide.blogspot.com
Storytelling in the Bahá’í Faith: The Hand of the Cause … bahaistorytelling.blogspot.com