It was in Montreal that Lorol first learned of the Baha’i Faith. Her early interests included Theosophy, but her contact with the Bahá'í teachings provided her with a means to uplift her life in service to a cause that preached universality and the unity of humanity. 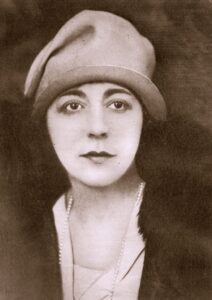 It was in Montreal that Lorol first learned of the Baha’i Faith. Her early interests included Theosophy, but her contact with the Bahá’í teachings provided her with a means to uplift her life in service to a cause that preached universality and the unity of humanity. She accepted an invitation to attend Green Acre Baha’i school in Maine to learn more. Lorol invited husband, Fred, to share her attraction to both Green Acre and to the Cause of Bahá’u’lláh. Freddy was skeptical but willing to indulge his wife. Both Schopflochers became Baháʼís at Green Acre in the summer of 1921. They were so enamored of the surroundings at Green Acre that they purchased a cottage on the grounds and later, the nearby Nine Gables farm

They journeyed to Mandatory Palestine to meet ‘Abdu’l-Bahá, but arrived shortly after His passing, (November 28, 1921). Their interactions there confirmed them in their new beliefs and their relationship with Shogi Effendi, the newly appointed Guardian of the Faith. Lorol described the Guardian as “the most alive-looking person I have ever met.” ‘Dear Lorol’, as the Guardian addressed her, went on to visit Shoghi Effendi some eleven times during his ministry always greatly encouraged and inspired by him.

In the 20’s as Lorol began her service as an international Baha’i lecturer/traveler she achieved several ‘firsts’, including the first Western woman to cross the Hamad Desert between Damascus and Baghdad (early 1920s) and the first woman to fly from England to India (1926),

A Canadian friend relates: “Her travels included trips on the first international air routes in the 1930s . . . These trips by air provided her with an opportunity for publicity for the Faith which was not readily obtainable in that period. As an unusual world traveler, she was newsworthy, and where possible she made excellent use of the media for the Faith.”

In 1923 Canadian newspapers reported Loral’s visit to King Faisal (deposed King of Syria, then King of ‘Iráq: 1921-1933). She was accorded several audiences to discuss the question of the seizure of the keys to the House of Bahá’u’lláh in Baghdád. Again, in 1925, at the request of the Guardian, Lorol petitioned Feisal’s intervention. Having been told the King was not receiving visitors she made an unorthodox entrance by driving her car through the palace gates at high speed and coming to an abrupt stop directly in front of his palace. Feisal himself invited her in for tea.

Lorol travelled throughout Iran at least twice – visiting parts not previously visited by Western Baháʼís. She was one of a handful of Western women, including her close friend, another temperamentally ‘high powered’ teacher, Keith Ransom-Kehler, attempting to alleviate persecution of the beleaguered Bahá’í community in Iran.

Between 1924-1929 she toured Iran, North to South, and East to West. Her travel to the interior of was said to be “not duplicated by any other western woman”.

One of her interpreters wrote: “That Mrs. Schopflochers first visit to the cities of northern Persia left a remarkable and ineffaceable impression upon the hearts of those who crossed her path, was most evident when, upon hearing of her return visit to that country last spring (1927), there was great rejoicing and all anxiously looked forward to a reunion with this gifted and beloved sister and teacher. No greater tribute to her glowing influence and work could be given than the inspiring welcome accorded her every place. On this second visit some of the cities in central and southern Persia were visited for the first time by any Western Bahá’í.”

Another reported: “She was really inspired every time she spoke. She addressed audiences of several hundred to a thousand or more at many meetings, and the ovation given her was unprecedented . . . always she especially emphasized the position of women in this age and the great part they are to have in bringing about a better social order. How she did plead for the emancipation and education of women! How courageous she was! How inspired! What a profound impression she made on her audiences, and what a powerful influence the messages she brought had upon them!”

At one gathering “. . . a distinguished poet of Persia rose and chanted a poem he had composed eulogizing the work Mrs. Schopflocher had accomplished as a Bahá’í teacher.” The poem refers “to the seeds of love, knowledge and truth which she has scattered throughout India, Persia and elsewhere”. “A radiant star went from the West to the East.”

In May 1925, John Esslemont wrote, “…she arrived in Haifa after a very successful tour in Russia, Persia and Iraq.” Agnes Alexander said Lorol was “the only American Bahá’í, so far as I am informed, to teach in the Soviet Union.”

Keith Ransom-Kehler also paid tribute to the early teaching work performed by Lorol Schopflocher in Hawaii, Japan and China, in the company of Miss Agnes Alexander and described meeting Mrs. Schopflocher in Burma where she had visited a number of communities including Daidanaw, known as “‘Abdu’l-Bahá’s village” (the entire population had accepted the Faith). “Mrs. Schopflochers visits left deep impressions and wrought good results.”

During the 1920’s Shoghi Effendi fostered the development of Baha’i administrative institutions. His World Order letters published in the 30’s, had a larger scope, unfolding a clear vision of the relationship between the Baháʼí community and the process of social evolution, establishing the Baha’i Administrative Order as the nucleus and pattern of the world civilization to come.

After this her favorite lecture themes were centered on the World Order letters of Shoghi Effendi (first collected in 1938) and the emancipation and education of women. Ironically, her home province, Quebec did not give full voting rights to women until 1940, and Canadian Indigenous women until 1960.

During the courses she gave Lorol often distributed compilations which she had compiled, and mimeographed. One, a forty-page digest of Current Religious and Scientific Writings on The Unfoldment of World Civilization.

When Lorol spent time in her Green Acre property, Ball Cottage in the early 30’s her friend, the famous movie actress/Baha’i Carole Lombard (at that time married to Clarke Gable)  visited and gave fireside meetings. While the two women visited, Clark Gable is said to have gone fishing.

“I am convinced that as you travel, whether in America, Europe, Asia, or Australasia, and get in contact with its fervent and devoted followers in the diverse regions of the world you will increasingly realize the unique potency, the transforming power, the all unifying force which distinguish the Baha’i faith from the religious and humanitarian movements of this age.”  Shoghi Effendi 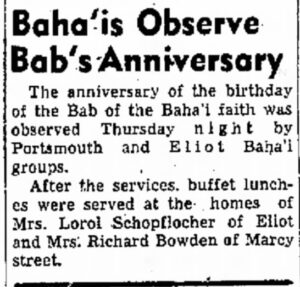 By 1934, Lorol had undertaken nine world tours making particularly effective presentations on the Bahá’í Faith to notable people while visiting remote Bahá’í communities. Mrs. Schopflocher’s travels on behalf of the Cause took her to no less than eighty-six countries, some of them several times. “Mrs. Schopflocher has proven herself an intrepid traveler, venturing into regions difficult of access, dangerous even for travel. With brave heart and with a blazing enthusiasm for the Bahá’í Cause she has been enabled to reach many prominent men and women of the East and present her message to them.”

During her 1936 visit to the Holy Land she succeeded in presenting a volume of Bahá’í literature translated into the native language of Ethiopia to the internationalist, Emperor Haile Selassie (regarded by millions of Christians and followers of the Rastafari movement as the reincarnation of Jesus Christ). In February 1939 she departed for to teach in the Scandinavian countries and travelled to Viipuri (Vyborg, USSR.) and to the Arctic.

At one fireside in a first-class hotel in Helsinki those attending were so charmed “that the meeting lasted until midnight. It was a new experience to them: roses, perfume, a lovely setting, and a charming, dynamic, vivacious speaker presenting a wonderful Truth.” “Lapland has been illumined with the light of the Faith by the indomitable energy of Mrs. Lorol Schopflocher.”.

At one of her lectures a noted author said of her that “She is the world’s most wonderful peace promotor.” One newspaper wrote at length of her work and as a result she received many letters from other cities, and many enquirers sought her wanting to know more of the new Revelation. She made a deep impression because of the way that she explained the connection between the present Revelation and the Bible. In her presence one felt like a thirsty traveler who had reached the Water of Life.”

Twice she traveled on the Hindenburg, the largest rigid airship ever constructed. Her book, Sunburst, recording her visits to many lands was first published in England in 1937 and had a “tremendous appeal” to anyone interested in international problems.

Lorol and husband are listed among those who first to undertake travel teaching in Central and South America and, in the case of Lorol, Africa.

Her husband, Shoghi Effendi’s ‘beloved Fred’ was appointed a Hand of the Cause on 29 February 1952 and passed away suddenly July 27, 1953 in Montreal, Canada.  She was sixty-seven years old. On November 4, 1957, her beloved Shoghi Effendi passed away.

Lorol herself spent the last years of her life at her Green Acre properties holding teas and receptions at her home in the Ole Bull Cottage before moving to her nearby ‘Nine Gables’ farm where she operated a health retreat and lived until her death. She deeded the Ole Bull Cottage (renamed Schopflocher House in the 70’s) and the ‘Nine Gables’ property to the National Spiritual Assembly. 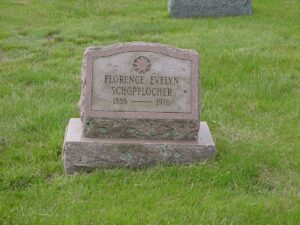 Although Lorol was a well-known and sought out lecturer it was not all smooth sailing for her. Her considerable wealth, prestige, and evident social position seems to rankled some, leading to reports that one shipboard dance companion said she had the best legs he had ever seen on a missionary. Another concerned her crossing the Atlantic in the Hindenburg, claiming she had the captain “buzz” her home in Montreal.

During her 1932 pilgrimage the Guardian told her:

“You must not allow yourself to be touched by this chatter of idle minds. You must go ahead and teach. I am deeply grateful for the unique manner in which you have served the Faith of Baha’u’llah and will pray and supplicate that divine bounty will reassure you and lift these burdens from your heart. I shall never forget the services you have rendered the Faith and am deeply appreciative.”

At Eighty-four years of age Lorol ascended to the next world September 26, 1970 and was interred in the Mount Pleasant Cemetery in Eliot, Maine, in the U.S.

8 – Messages of Shoghi Effendi To The Indian Subcontinent,Baha’i Publishing Trust, India. Revised and Enlarged Edition of Dawn of a New Day, 1995.