As Chief Joseph deepened his understanding of the Faith he shared with all that came to learn, and group after group accepted the new Faith. Other chiefs from neighboring villages and even nearby islands made the effort to visit him and to learn of the new Faith. A high ranking Chief from Pohnpei decided to come and find out for himself and as a result he too accepted the Faith. 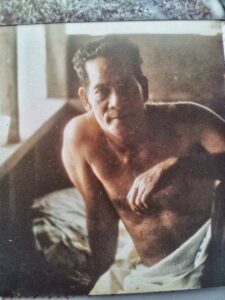 “Preserving the best and accepting the future”.

This Micronesia Chief accepted the Bahá’í Faith and more than a thousand others followed him. What follows is the recollection of John Rosen who lived with the Chief for 27 years, and became his successor. The early 1970s witnessed many Bahá’í travel teachers moving throughout the Pacific and a team from Hawaii reached the shores of the little island of Udot in the Chuuk lagoon. After talking with a few people in a village they realized that they needed to call on the Chief. So they did and found him to be a man of great vision and wisdom with an open mind. He was a Chief that was dearly loved and respected by the village people and even others on neighboring villages. After few days of discussions and talks with Chief, where he posed many thought provoking questions, he accepted the Bahá’í faith and became a lover of Bahaullah and the new message of God for his people. Word quickly spread that the Chief had accepted the new religion of God for today and many groups and families approached the Chief to learn more. He encouraged them to investigate for themselves and many began to accept the new religion. From those early days, his home and the Chief’s meeting hall became the center for the diffusion of the message of Baha’u’llah.  He realized the New Day had come and his people would have to elevate their understanding and infuse their individual and collective lives with these new Teachings.

As he deepened his understanding of the Faith he shared with all that came to learn, and group after group accepted the new Faith. Other chiefs from neighboring villages and even nearby islands made the effort to visit him and to learn of the new Faith. A high ranking Chief from Pohnpei decided to come and find out for himself and as a result he too accepted the Faith.

Chief Kentoky soon started to apply the new teachings in a practical way. When his sister passed away, although tradition and custom demanded a very elaborate and lengthy ceremony lasting many days, he tried to apply Bahá’í principles and laws surrounding death. He understood that death was a time to pray for the progress of the soul and not to busy oneself with cooking and feeding people.  Although initially people were confused they came to embrace these new teachings and practices. Gradually people come to recognize him as the Paramount Chief of the whole of Udot Island and his reputation grew even more. It was during the month of the Fast that people really began to appreciate that this new religion had its own laws and teachings. Many struggled to follow their Chief during the Fast. Many wanted to break the Fast but after listening to him they realized the importance of the Fasting. And he led by example. His life continued to be a shining lamp for his people and a way of understanding the new teachings. He never stopped teaching the Faith until his last breath. Because of his high rank and the love the people had for him, the government arranged for a state funeral for him upon his passing, but followed the Bahá’í burial laws. His funeral was broadcast on Chuuk Radio and the program included the prayer for the death, among other prayers and readings. People from many villages and islands come to visit his gravesite and to offer prayers for several days after his funeral. Judge Richard Benson, a Counselor at the time, summarized this man’s life with these simple yet profound words:

“Preserve the best and accept the future. Blessing on his soul.”

Manoucher Sabet is a pioneer of 37 years in Mariana Islands. He is currently serving on the National Spiritual Assembly. He was a previous Auxiliary Board Member. His wife is from Korea and they have three wonderful children. The Sabet family turly love the indigenous people called Micronesians.