As a medical doctor, Adelbert Mühlschlegel opened his first practice in Stuttgart soon after graduating from university, and he worked until 1959 when he retired and served the Faith fulltime. In 1924, he was elected to the National Spiritual Assembly of Germany and Austria and served on it until the administrative functions and institutions of the Faith were disbanded by order of the Gestapo in 1937. During the Second World War, much of Adelbert’s library was confiscated and the Mühlschlegel home was bombed in 1944. 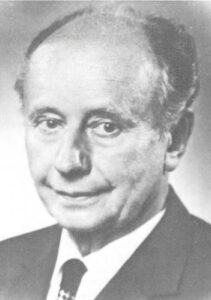 Dr. Adelbert Mühlschlegel was a Hand of the Cause of God, a pillar of the administrative order, an Esperantist, a pioneer, and a medical doctor.

Adelbert Friedrich Alexander Marinus Mühlschlegel was born into a loving and caring family in Berlin, Germany, and he grew up in Ludwigsburg and Stuttgart. Adelbert’s father was a military doctor in the service of the King of Württemberg who instilled in his son a sense of discipline and intellectual curiosity contributing to Adelbert graduating from school as the best student of his year, to his time in Geneva studying French, to his service in the medical corps during World War I, and to his choice of medicine for further study.

Adelbert’s mother was a pastor’s daughter who nurtured in her son a spiritual aptitude that found expression, throughout his life, in poems and a longing for spiritual enlightenment. She introduced Adelbert to the BaháʼíFaith in 1920 when he was 23 years old. He was studying in Greifswald, in the north-east of Germany, when a letter from his mother informed him that she had found a new and universal religion.

His inquisitive and searching soul immediately turned to all available literature on the new Faith and soon he sent a letter to ‘Abdu’l-Bahá declaring his belief in Bahá’u’lláh. On October 16, 1920, he received a response from the Master:

“O thou son of the Kingdom!

Thy letter hath been received. It was like unto a bag of musk.

When I opened it, the fragrance of the love of God was perceived. It is my hope that thy rivulet may develop into a sea and surge with the breezes of divine guidance, casting a wave to the East and another to the West.

Be thou deeply thankful to thy teacher and show unto her heartfelt and spiritual gratitude, because it was she who caused thee to hear the divine call and it was through her that thou didst attain to eternal grace.

It is my hope that thou wilt follow in the path of Bahá’u’lláh. Thine honoured wife will be favoured at the threshold of Oneness and looked upon with the eyes of the merciful Lord.

Upon thee be the Glory of the All-Glorious.”

A Life Defined by Service

As a medical doctor, he opened his first practice in Stuttgart soon after graduating from university, and he worked until 1959 when he retired and served the Faith fulltime.

His home was a community center, often visited by friends and seekers, and a haven for many Iranian Baháʼís that arrived in Germany for university studies, especially after the Second World War. His wife Herma, whom he married in 1926, had a joyful and loving nature that made everyone feel at home at once. Together they had two girls and three boys. 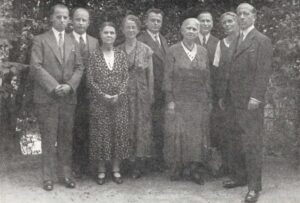 Adelbert felt strongly about the equality of men and women and Herma contributed greatly to the success of his medical practice. She was a courageous and dedicated woman and a strong support for all of Adelbert’s service to the Cause.

In the community, Adelbert arose to serve in any way possible, seeking direct and indirect teaching opportunities, giving talks, writing letters, writing plays, translating the Writings into German and acquiring a good knowledge of Persian and Arabic in the process – these are just a few of the tasks he took upon himself.

As an ardent Esperantist, he attended the World Congress in 1925 and delivered, what Marta Root called, “a beautiful address on the Teachings of Bahá’u’lláh about a universal auxiliary language.”

In 1924, he was elected to the National Spiritual Assembly of Germany and Austria and served on it until the administrative functions and institutions of the Faith were disbanded by order of the Gestapo in 1937. During the Second World War, much of Adelbert’s library was confiscated and the Mühlschlegel home was bombed in 1944. But the family never lost its spirit of service. While Adelbert continued his medical practice and translations, Herma served the Cause in her own unique and brave way during the war. Because of her beautiful singing voice, Herma received official permission to regularly travel to Zurich, Switzerland, for singing lessons and it is thanks to these travels that the German Baháʼís were able to stay in contact with the Baháʼí World Center.

In 1946, Adelbert was elected to the re-established National Spiritual Assembly of Germany and Austria, on which he served until 1959.

For many years, he was in regular contact with Shoghi Effendi, the Guardian of the Baháʼí Faith, and in 1936, Adelbert and Herma went on pilgrimage to meet the Guardian in Haifa. On 29 February 1952, Shoghi Effendi announced the appointment of seven Hands of the Cause of God, among them Adelbert Mühlschlegel.

This appointment started a period of extensive travels, first throughout Europe as representative of Shoghi Effendi and as travel teacher, and later on behalf of the Universal House of Justice also to Asia, Africa, and South America.

The Passing of the Beloved Guardian

On November 4, 1957, the beloved Guardian passed away in London. The next morning, Adelbert received a phone call from Rúhíyyih Khánum who asked him, a trusted coworker, a physician, and a deeply spiritual Baháʼí, if he would come to London to prepare Shoghi Effendi’s body for burial. He humbly accepted this service and, together with fellow Hand of the Cause of God Hermann Grossmann, he arrived in London within hours from the call.

In the afternoon of Thursday, 7 November, Adelbert washed and prepared the body of the Guardian for burial, he wrapped him in fine white silk and anointed the body with rose oil, which the Guardian himself had given to Ugo Giachery, who had brought it from Italy with him. Ruhiyyih Khanum waited in the ante-room while the earthly remains of her husband and the Head of the Faith were cared for by Adelbert Mühlschlegel. He later shared with her:

“Something new happened to me in that hour that I cannot, even after a few days, speak of, but I can mention the wisdom and love that I felt pour over me. In that moment which to worldly eyes would have appeared so different there was a tremendous spiritual force such as I have only felt in my life in the holy Shrines. My first impression was the contrast between the body left behind and the majestic, transfigured face, a soul-stirring picture of the joyous victory of the eternal over the transient. My second impression, as I prayed and thought and carefully did what I had to do, was that in this degree of consecration to the work of God I should work all my life, and mankind should work a thousand years, in order to construct “the Kingdom” on earth; and my third thought was, as I washed each member of his body and anointed it, that I thanked those beloved hands which had worked and written to establish the Covenant, those feet that had walked for us, that mouth that had spoken to us, that head that had thought for us, and I prayed and meditated and supplicated that in the short time left to me, the members of my body might hasten to follow in his path of service; and my last thought was of my own distress because I felt how unworthy my hands were to anoint that blessed brow with attar-of-rose as the Masters of old were wont to do to their pupils; and yet what privileges, what duties fall to us, the living, to watch over what is past and mortal, be it ever so exalted. A great deal of mercy, love, and wisdom were hidden in this hour.”

After the passing of the Guardian, a period called the Interegnum began for the Baháʼí world. It was a period of five years in which the international Baháʼí community was safely guided and protected by the loving service of the Hands of the Cause of God, whom Shoghi Effendi had called the “Chief Stewards of Bahá’u’lláh’s embryonic World Commonwealth” in his last major message in October 1957, just a few weeks before his sudden departure from this world.

In those five years, the Hands of the Cause prepared the way for the election of the first Universal House of Justice in 1963. Adelbert was chosen as one of the nine Hands of the Cause to live in the Holy Land and to serve as Custodian of the Bahá’í World Faith. Though Abu’l-Qasim Faizi replaced him in this service as it was not possible for Adelbert to do so, he acted as substitute Custodian throughout those years.

His health had started to trouble him and he experienced a heart attack in 1958. In 1959, he retired from his service on the National Assembly of the Baháʼís of Germany and Austria as well as from his medical profession. Always an active Esperantist, he helped establish the Bahaa Esperanto-Ligo in those years and served as its first chair.

After the loss of his beloved wife Herma in 1964, Adelbert left Germany for Austria, where he served the community of Vienna wholeheartedly, and where he found new love with Ursula Kohler, the secretary of the National Assembly of Austria. Together, they pioneered first to Fribourg in Switzerland in 1970, then upon the wish of the Universal House of Justice to Hofheim, near the European House of Worship, in December 1973, and eventually to Athens, Greece, in 1977.

In June of 1977, commemorating his 80th birthday, the German Baháʼí Publishing Trust published a collection of his poems, and after visiting the Holy Land in November that same year, Dr. Miihlschlegel returned to Greece to continue to assist the young community which had just elected its first National Spiritual Assembly.

On July 29, 1980, Adelbert passed away at his home in Athens, lovingly cared for by his wife Ursula and in the presence of one of his daughters. 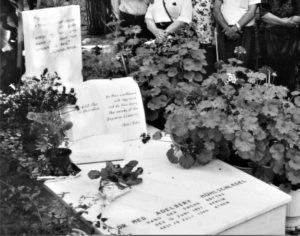 The Universal House of Justice

The cablegram from the Universal House of Justice elicited manifold expressions of love and gratitude for his soul and his service to the Cause. Friends everywhere held devotional meetings in his honor.

A report from Hand of the Cause of God Shu’a’u’llah ‘Ala’i’ in the United States read: “The hearts of the friends were deeply touched and grieved, but they felt resigned before the will of the Lord, fully conscious that the soul of Dr. Adelbert Miihlschlegel is now in the Abha Kingdom in the utmost joy and gratitude, as he recalls the efforts he exerted during his lifetime in the promotion of God’s Holy Faith which is the sole path for the salvation of the world from the great convulsions with which it is beset …”

And the National Spiritual Assembly in Kenya cabled:

TagsAdelbert Mühlschlegel Baha'i Hand of the Cause of God
FacebookTwitterPinterestLinkedIn