"At my birth, Baha'u'llah named me 'Zia' (Light) and gave me the Turkish title 'Effendi.' But on my first visit to Him, when He inquired about my health, I replied in Arabic 'Mabsoot' (I am happy). He questioned, 'How is your father?' I answered, 'Mabsoot'; and 'How is your mother?' He asked. 'Mabsoot' was my reply. He laughed heartily and after that He always called me Mabsoot Effendi (The Happy One).” 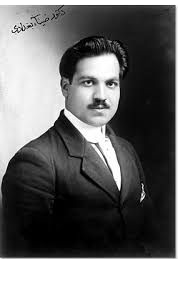 Dr. Bagdádí attended the American University of Beirut and graduated as a physician. In September 1909, on ‘Abdu’l-Bahá’s advice, he moved to Chicago to further his medical studies and soon emerged as a pillar of the Chicago Bahá’í community. A major translator of ‘Abdu’l-Bahá’s tablets into English and the editor of the Persian pages of Star of the West, he accompanied ‘Abdu’l-Bahá on much of His North American travels in 1912. [1]

In the year 1929, Dr. Bagdádí wrote a book telling of his birthplace and travels in the Orient under the title, Treasures of the East. He tells here, when he was a child, he had the great privilege of seeing and being with Bahá’u’lláh. He wrote:

“I had the greatest honor and privilege to see Bahá’u’lláh and sit at His feet many days and nights in this Mansion. Here He used to hold my hand while walking to and fro in His large room, revealing Tablets, chanting the prayers with the most charming and melodious voice, while one of the attendants took them down. Here I saw Him teaching and blessing the pilgrims who came from all lands. On hot days He would take me with Him to the outer alcove of the Mansion where it was somewhat cooler. I would stand in a corner with folded arms, my eyes fixed on His incomparable countenance, while the gentle breezes blew on His soft jet black hair which reached almost to the waist, flowing beneath the taj, like a crown, that covered His head and a part of His broad, full, high forehead.

“From His light-colored garments which were similar to those of all the ancient prophets, I had always inhaled the fragrance of the pure attar of roses. At times He would spend half an hour on the alcove, and my eyes would remain fixed on His majestic face. But whenever He glanced at me with His brown, piercing, yet most affectionate eyes, then I had to turn mine away and look down on the floor.

“At my birth, Bahá’u’lláh named me ‘Zia’ (Light) and gave me the Turkish title ‘Effendi.’ But on my first visit to Him, when He inquired about my health, I replied in Arabic ‘Mabsoot’ (I am happy). He questioned, ‘How is your father?’ I answered, ‘Mabsoot’; and ‘How is your mother?’ He asked. ‘Mabsoot’ was my reply. He laughed heartily and after that He always called me Mabsoot Effendi (The Happy One).”[2] 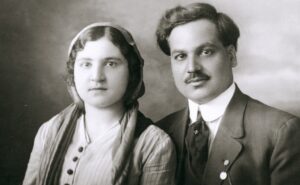 Zeenat Khanum was the daughter of Hasan Aqa Tabrizi, aunt of Ali Nakhjavani who went to the Holy Land to give information relating to the restoration of the house of ‘Abdu’llah Pasha. Zeenat’s sister was Fatimih Khanum (Ali Nakhjavani’s mother) who spent her youth in service to the Greatest Holy Leaf. These two sisters, when they were young girls in ‘Akka, nine and eleven years old, were accepted into the household of ‘Abdu’l-Bahá.[3]

We are not sure how exactly Dr. Bagdádí and Zeenat Khanum met but they married and it was the first Bahá’í marriage in Montreal, Canada which took place on April 30, 1914. [4] 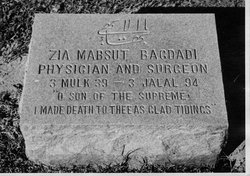 During the “Red Summer” race riots of 1919, Dr. Bagdádí traveled frequently into black Chicago neighborhoods to provide food and medicine. He retired to Augusta, Georgia, to serve the Faith in the American South and at the age of 53 died there. [1]

“I remember when Dr. Zíá Bagdádí died and the news reached him. I don’t know exactly when it was, but it was a very, very short time after my marriage with the Guardian. Perhaps in the first month, or maybe even less time than that. News came saying that Zíá Bagdádí had died and the Guardian cried for almost an hour that night.” [6]