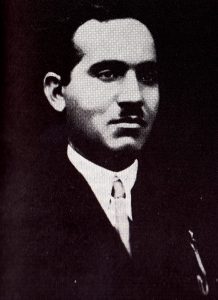 His forefather, Hakim Ya’qub, the Shamsu’l-Hukama, was a well-known Jew of that city who had migrated to Kashan, and he was a physician. However, we know that medicine was the ancestral profession of this family and Musa, Yaqub’s son and Sulayman’s father, was engaged in this occupation as well. Hakim Ya’qub was among the renowned Jewish families of Kashan who became a Bahá’í and established an affluent and large family.

Sulayman’s childhood was immersed in the Bahá’í beliefs and he was educated at the Vahdat-Bashar School. Later, he enrolled as a medical student in Tehran.

He was devoted to the Bahá’í faith and he made efforts to improve the condition of his fellow believers. He was a member of the Local Spiritual Assembly of Kashan and served as chairman. “In most years he was a delegate from Kashan to the National Convention of the Bahá’ís of Iran. Among the faithful and wronged believers of that region, none exerted greater efforts in the teaching and promulgation work than Dr Berjis.” [not clear who said this]

To meet the needs of the beneficial teaching work of the Bahá’í faith in Iran, he had deeply studied Islamic theology and ‘had memorized a number of Traditions and verses of the Qur’an’.

He worked for the Ministry of Health and was considered ‘one of the most competent physicians in Kashan’. However, due to administrative reasons, he resigned his post on January 6, 1950, and commenced private practice.

Dr. Berjis also had a pharmacy at which most of the patients who could not afford payment were seen for free, and also their medication was given to them at no cost. He would even go so far to give money to poor patients, and for this reason he was esteemed and famed throughout that town.

He could not refuse the request and the plea of ‘Abbas Tavasuli and ‘Ali Naqipur, who implored him, ‘Doctor, we earnestly entreat you to come and see our sick one. He is very ill. Please trouble yourself and come to see him.’

His kind and compassionate heart, with refined emotions that was profoundly grieved by every negative incident, and which would be deeply moved over every suffering human being.  He could not decline the plea of these two youths who appeared helpless, and he was compelled to prefer attending to this imaginary patient to seeing the seven, eight or ten patients who were awaiting him in his office.

On February 3, 1950, about eight-thirty in the morning, two citizens of Kashan entered the office of Dr. Berjis and invited him to make a house call. Since there were ten patients waiting in his office, the doctor requested postponement of the call. The visitors pleaded that the case was a real emergency, and the doctor relented and followed the two men. After passing through the streets of Kashan they reached their destination and at this time six other men who had been awaiting the group attacked the physician. With knives, sticks and their fists they wounded him seriously. He was thrown from a height of about fifteen feet through a window. The persecutors continued to beat him until he was no longer alive. At least eighty stab wounds were apparent on his body. The owner of the house tried to intercede for the doctor but his efforts were futile. The landlord called for help from the rooftop. Members of the town gathered around and witnessed the cruel act. Muhammad Rassul-Zadeh, the vicious murderer, washed his hands with the snow on the sidewalk. With his accomplices he went to the police office, explaining that they were teachers of the Muhammadan faith and had killed Dr. Berjis for religious differences. The men were imprisoned. The people of the town feared the threats of this religious group and closed their shops. After medical examination of the body of Dr. Berjis a group of Baha’is under police protection carried the body of the martyred physician to Gulastan Javid which is three kilometers from Kashan. A Baha’i funeral was held for the distinguished doctor.