She often said something to this effect: Nothing worth knowing is attained without labor, tremendous effort, and undivided attention. She always felt sure that she was to go forth to service and that her duty would be to give out "thoughts that breathe." She often said that she wished her service would "kindle the feelings" and touch the hearts. She certainly attained this wish, for as a speaker in small or large groups, she was eloquent, persuasive, and convincing. 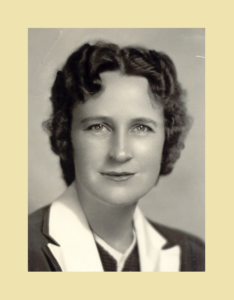 Dorothy Beecher Baker
Born: December 21, 1898
Death: January 10, 1954
Place of Birth: Newark, New Jersey
Location of Death: near the island of Elba in the Mediterranean Sea
Burial Location: Her body was lost at sea

Dorothy Beecher Baker was a Hand of the Cause of God, an administrator, a remarkably gifted teacher, she was lifted out of her lofty position at the time when she was in the full tide of her capacities for service to the Baha’i Faith.

Dorothy’s father was related to Henry Ward Beecher, a liberal clergyman famous for his eloquence on the subjects of the abolition of slavery and prohibition, and to Harriet Beecher Stowe, the author of Uncle Tom’s Cabin. Dorothy graduated from Montclair Normal College and taught in the public schools of Newark for two years. She was then offered a contract to teach in the Ethical Culture School in New York but declined the offer and, in the summer of 1921, she married Frank Baker.

Dorothy and Frank A. Baker had only two children together, Louise and William (Bill).  Frank Baker’s first wife Mary died, leaving him a widower with two children, Conrad and Sara, who was called Sally by the family.  Sally died of leukemia when she was young in 1925 or 1926.  Frank Baker deserves much gratitude, for he stood by Dorothy’s side always, and, in his own magnificent services and his support of Dorothy’s teaching activities, there was the element of true sacrifice.

In 1912, Dorothy’s grandmother known as Mother Beecher took Dorothy when she was fourteen years old to New York to see ‘Abdu’l-Baha.  She had been a very shy child, sensitive to the point of deep suffering in the presence of adults. She was so shy that years later she still remembered the tension she felt when she entered the room where ‘Abdu’l-Baha was speaking. He smiled at her, and without speaking to her directly, motioned her to a foot-stool at His side.

At first she was so much afraid that He might speak to her that she could hardly bear it, but as He seemed to pay no further attention to her, she gradually relaxed. She was never able to remember what He talked about that day, but it was the moment of her birth as a Baha’i, and from that time on she considered herself a Baha’i. Although she left without speaking to Him, she could think of nothing else for days afterward and finally wrote Him a letter saying that she wished to serve the Faith.

He immediately sent her a Tablet in His own hand, translated by one of His secretaries which is now in the National Archives, in which He told her that He would pray that God would grant her desire. A few nights after that meeting in New York, ‘Abdu’l-Baha sent for Mother Beecher, who went to Him immediately. When she entered the room He was speaking to some people but interrupted what He was saying, turned to her, and said, rather abruptly:  “I called you to say that your granddaughter is My own daughter. You must train her for Me.” This rare and lovely soul was almost a perfect student; she studied the Baha’i Teachings in such a way (that is, with both mind and heart) that one would think her very life depended on her being filled to overflowing with the Revelation of Baha’u’llah. She often said something to this effect: Nothing worth knowing is attained without labor, tremendous effort, and undivided attention. She always felt sure that she was to go forth to service and that her duty would be to give out “thoughts that breathe.” She often said that she wished her service would “kindle the feelings” and touch the hearts. She certainly attained this wish, for as a speaker in small or large groups, she was eloquent, persuasive, and convincing. She also had that quality of personality so necessary for a public speaker, inimitable charm. But the most important quality, which was ever present, and which strangers as well as friends could observe, was that of sincerity.

Tragically, Dorothy died in a jet plane disaster in the Mediterranean Sea. The plane, BOAC Flight 781, had taken off at 4:30 a.m., Lima time, Sunday, on its way to London, and crashed in the sea about 40 minutes later.  She had had plans to continue her trip from Rome to Paris, New York, and from there to a pioneering post with her husband Frank Baker in St. Charles, Grenada, West Indies to conduct a ‘Ten-Year Island Crusade’.

Paul Edmond Haney was appointed Hand of the Cause to replace her in service to the Baha’i Faith.

TagsBaha'i Dorothy Beecher Baker Hand of the Cause of God
FacebookTwitterPinterestLinkedIn