Dagmar first heard of the Bahá’í Faith through her friend Marion Holley Hofman and immediately accepted it. Soon after becoming a declared believer she and her close friend, Virginia Orbison, went to Glendale, California, to help maintain the Local Spiritual Assembly status. 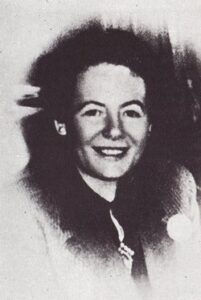 Dagmar’s father was Walter Sanford Dole who was born in 1868 and died in 1945 and is buried at Kawaiahao Church Cemetery in Honolulu. He had two children Dagmar and Carl Dreier Dole.  Dagmar’s mother was a member of thewell-known Dreier family, of Copenhagen,Denmark, whose forebear was the famousyoung thinker and writer of that name, whodied at the age of 30 years, leaving a trail of provocative and constructive thoughtafter him. A monument to his memory nowstands in the city of Copenhagen.

It is interesting that Dagmar’s father’sfamily should have been missionaries andher mother’s family Danish, as these twofacts were combined in Dagmar’s historyof service to God. Her life became consecratedto the work of teaching the Baha’iFaith and part of this service was done inthe land of her mother’s forebears-Denmark. [1]

Dagmar first heard of the Bahá’í Faith through her friend Marion Holley Hofman and immediately accepted it. Soon after becoming a declared believer she and her close friend, Virginia Orbison, went to Glendale, California, to help maintain the Local Spiritual Assembly status. She then became active in committee work for Central and South America and served as Chairman of the Inter-America Committee.

Later she journeyed to Alaska, and did valuable work in consolidating the Bahá’í community. From Anchorage she went to the Bristol Bay area in the Bering Sea, and worked among the Eskimos and Alaskan Indians working in the fishing industry.

Her service to these minority people cannot be measured. She won their friendship because she gave them her love and compassion. She served them both materially and spiritually. She was their friend.

Dagmar then was assigned to Copenhagen, Denmark. Here again she served the Faith she loved so well with steadfastness and courage. Her record in Denmark is rich. She, along with other pioneers and Johanne Hoeg, was instrumental in bringing forty-seven believers into the Faith in Denmark.

Her last pioneer assignment was to Italy, where she served both in Naples and in Milan. In the village of Gilon, high on the slopes of the Swiss Alps, lies Dagmar where in the springtime the white narcissus pour out their fragrance and the snow-capped mountains eternally stand sentinel. Snow was softly falling, covering everything in a mantle of white, as members of Dagmar’s family, and her Bahá’í friends from all over Switzerland gathered for the funeral service. During her short stay in Valmont, Dagmar had won the hearts of the entire staff. The doctors, nurses, the maids, all came to pay their last tribute because they, too, loved her.

“She died in ‘battle dress,”‘ said the Guardian; “it is wonderful to die in active service.” 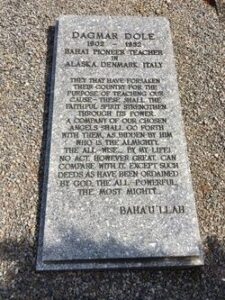 Looking up at those majestic mountains one was reminded of the qualities of Dagmar’s nobility and strength. Thinking of the starry white narcissus that will blossom over those mountain slopes, one saw her innate purity; that delicate shyness and awareness that were hers.

“Her spiritual station is very high.”

These words of the Guardian gave us a sense of pure joy.

“Her grave will be a great blessing to Switzerland, to all of Europe. She is the first to give her life for the Cause in the European project. Her resting-place is important.”

She had been in ill health for some months. She arrived for the Luxembourg Conference but became too ill to participate. Arrangements were immediately made for her to be sent to the Valmont Clinic, situated in one of the loveliest spots of Switzerland, above Montreux. Here for two months Dagmar rested and received treatment. On November 8th  she became very ill, passed into a state of unconsciousness and five days later slipped through the “Open Door” to pioneer in the worlds of God. [2] 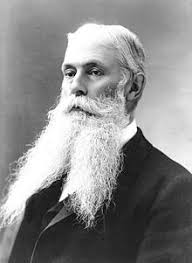 Sanford Ballard Dole was Dagmar’s Great Uncle and he was the Hawai’i Governor. Born in the Hawaiian Islands to American parents, Dole became the only American to become the Chief Executive of an independent foreign nation. He attended Oahu College, studied law school on the mainland, returned to Hawai’i in 1867 and established a private law practice. In 1886, under the Hawaiian Kingdom, he was appointed to the Supreme Court as an Associate Justice. While in position, he played a prominent and active role in the overthrow of the monarchy and was then elected president of the Provisional Government in 1893.

When the Provisional Government declared itself the Republic of Hawai’i, Dole went to Washington, D.C. to press for American annexation of the Islands. Hawai’i became a United States territory in 1898 and President McKinley appointed Dole the first Governor of the Territory of Hawaii, serving from 1900 – 1903. After leaving office, he was a U.S. District Judge, from 1903 – 1916 and practiced law until his death at age 82. His cousin James Dole was the founder of the Dole Pineapple and Food Company.

James Drummond Dole was born September 27, 1877 and died on May 20, 1958, also known as the “Pineapple King'”. He was an American industrialist who developed the pineapple industry in Hawai’i. He established the Hawaiian Pineapple Company (HAPCO) which was later reorganized to become the Dole Food Company and now operates in over 90 countries.

Inscription on grave marker:
Dagmar Dole 1902-1952. Bahá’í Pioneer Teacher in Alaska, Denmark, Italy. “They that have forsaken their country for the purpose of teaching our cause — these shall the faithful spirit strengthen through its power. A company of our chosen angels shall go forth with them, as bidden by Him Who is the Almighty, the All-Wise…By My Life! No act, however great, can compare with it, except such deeds as have been ordained by God, the All-Powerful, the Most Mighty…” Bahá’u’lláh