Áqá Muḥammad had a fine poetic gift, and he would create verses like stringed pearls. 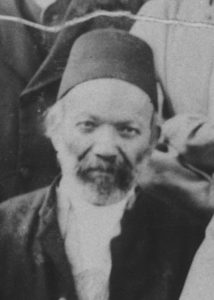 Muḥammad-Ibráhím, who bore the title of Manṣúr—Victorious—was a coppersmith. This man of God, yet another among the emigrants and settlers, was a native of Káshán. In the early flowering of his youth he recognized the newborn Light and drank deep of the holy cup that is “tempered at the camphor fountain.” He was a man of pleasing disposition, full of zest and the joy of life. As soon as the light of faith was lit in his heart, he left Káshán, journeyed to Baghdad, and was honored with coming into the presence of Bahá’u’lláh.

Áqá Muḥammad had a fine poetic gift, and he would create verses like stringed pearls. In Zawrá—that is, Baghdad, the Abode of Peace—he was on amicable terms with friend and stranger alike, ever striving to show forth loving-kindness to all. He brought his brothers from Persia to Baghdad, and opened a shop for arts and crafts, applying himself to the welfare of others. He, too, was taken prisoner and exiled from Baghdad to Mosul, after which he journeyed to Haifa, where day and night, lowly and humble, he chanted prayers and supplications and centered his thoughts on God.

He remained a long time in Haifa, successfully serving the believers there, and most humbly and unobtrusively seeing to the travelers’ needs. He married in that city, and fathered fine children. To him every day was a new life and a new joy, and whatever money he made he spent on strangers and friends. After the slaying of the King of Martyrs, he wrote an elegy to memorialize that believer who had fallen on the field of anguish, and recited his ode in the presence of Bahá’u’lláh; the lines were touching in the extreme, so that all who were there shed tears, and voices were raised in grief.

Áqá Muḥammad continued to live out his life, high of aim, unvarying as to his inner condition, with fervor and love. Then he welcomed death, laughing like a rose suddenly full-blown, and crying, “Here am I!” Thus he quitted Haifa, exchanging it for the world above. From this narrow slip of land he hastened upward to the Well-Beloved, soared out of this dust heap to pitch his tent in a fair and shining place. Blessings be unto him, and a goodly home. May God sheathe him in mercies; may he rest under the tabernacles of forgiveness and be brought into the gardens of Heaven.