He was a patient and tireless worker, always devoted to principle and showing a faith and courage worthy of the heroic age. His personal interests were seemingly forgotten in his devotion to the Faith. 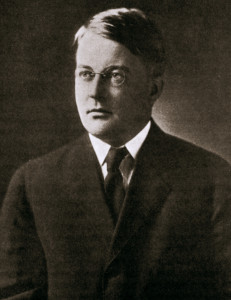 Alfred Eastman Lunt was for more than a generation one of the most distinguished and useful servants of Bahá’u’lláh. He was well prepared by college and legal education at Harvard University. As a student he heard the Great Message from Dr. ‘Ali-Kuli Khan, lecturing in the University. He obtained from it a life and inspiration toward achievement. He had very unusual abilities which shone in the field of writing and in his chosen profession, the law.

As a youth he edited and published a newspaper. As a Harvard student, he managed its Illustrated Magazine, making it successful as a business enterprise. While in college he was chosen President of its Republican Club, and then President of the National Republican College League, which included clubs organized in most of the colleges of the United States. He served actively in this capacity in several Presidential campaigns, and those acquainted with his achievements, and the respect with which he was held, are confident that had he not chosen to turn his energies with concentrated attention toward the Bahi’i Faith, realizing that all other means were ineffective, he would have risen to positions of great importance in the government.

As a lawyer, he became Solicitor of his native city, and an associate in a well established and popular law firm in Boston. Called by Miss Sarah J. Farmer to act as her legal counsel, he took the leadership in evolving those plans that protected her spiritual program and the Green Acre properties.

His services to the Green Acre Fellowship, at a very critical period in its existence, as well as over a number of years, were perhaps among the most valuable of his career, a career noteworthy for the variety and number of its accomplishments. Although the opposition retained very able counsel and aroused adverse public sentiment and widespread newspaper criticism, carrying the matter to the Supreme Court of the State of Maine, the final decision was a complete victory for the Bahá’ís and the friends of Miss Farmer. A few years later, this victory having established a new trend, Green Acre came under the jurisdiction of the National Spiritual Assembly, as the first Bahá’í Summer School in America.

Although greatly pleased with this evidence of the legal and organizing ability of Alfred, the head of his law business was greatly disturbed by the poignant press criticism, linking his associate with the Bahá’í Faith. To the demand that he choose between his activity in the Faith and his remunerative position, Alfred chose to open his own office.

In his work he was ever guided by the Bahá’í ideal of service, and his clientele was a very broad one. His wise and sympathetic understanding brought many clients of foreign birth, and though often poor and unable to pay adequately for his services, he never failed them, but with wise guidance, increased their understanding, and acquainted them with the spirit and point of view which was the inspiration of his own life.

For many years he was counsel for an important Massachusetts Committee of Manufacturers and Merchants in the handling of their legislative problems. This position bringing him in close contact with outstanding industrialists and merchants, not only revealed his exceptional ability and leadership, but also gave him an enormous fund of experience which was destined to be of great service to The Cause in the upbuilding of the Administrative Order. In frequent discussions with these important men he was able to show them that the spirit and the wisdom revealed in the Teachings of Bahá’u’lláh alone offered that solid foundation upon which industrial peace could be built.

He was a patient and tireless worker, always devoted to principle and showing a faith and courage worthy of the heroic age. His personal interests were seemingly forgotten in his devotion to the Faith. But a few years ago, when actually in the midst of great financial difficulties, a very wealthy friend offered to associate him in a law firm with a minimum guarantee of an income annually of ten thousand dollars. Although it required no commitments on his part, save to work, yet because it came from a source which he felt might wish to affect unfavorably his allegiance to his Faith, the offer was refused.

The trials and vicissitudes of fortune appeared only to confirm his faith, for in all situations he showed those characteristics, which ‘Abdu’l-Bahá, in referring to the Green Acre controversy, described as “lion hearted.”

He was from the beginning of the Cause in Boston, a member of its governing body. During many years he was elected by the Boston friends as one of the delegates to the Annual Convention. Of this body, he was many times chosen Chairman, the duties of which office he discharged with extraordinary ability. He conceived it to be his duty, not only to be acquainted with all the important matters under consideration, and to act with justice, but to stimulate all the delegates, in the assumption and exercise of their privileges and responsibilities.

He was a member of the Bahá’í Temple Unity, the first corporation organized to build the Mashriqu’l Adhkar. With the exception of two short intervals he had membership in the National Spiritual Assembly during the entire period of its existence. In these two national bodies, serving sometimes as chairman, sometimes as secretary, and as a member of its various committees, he showed signal devotion and ability.

This brief account does not of course permit a detailed report of a life of singular dedication, of great breadth of interest, of remarkable sincerity and courage. Those privileged to, have corresponded with him, appreciated his understanding heart, and the firmness and inspiration of his faith.

Mention, however, should be made of the fact that he was not only outstanding as an administrator with great range of vision and exact knowledge of details regarding the Cause in America, but he was also a teacher whose addresses and writings were characterized by spiritual insight, knowledge of the Divine Teachings and understanding of the needs of the soul. He delved deeply into the inner-meanings of the Sacred Writings, and followed closely those movements which were affecting a rapidly changing society.

He was affectionate and kind, reflecting the Divine love in his readiness to serve the neglected, poor and weak, a mark of true nobility. He made himself one with people of various races, classes and nationalities in the line of service. He had his place also among the strong, who drew upon his fine endowment of power, and from whom, his capacities and virtues won admiration.

Faithful unto death was he, traveling long distances over the country for administration and teaching when his body was weakened with a malady which finally proved fatal. Meanwhile he showed no lessening of spiritual attraction, devotion and power. Just two days before his passing, he wrote a most cheerful and hopeful letter to one of his friends, telling of his plans for future activities.

Those who mourned his passing were consoled by the spiritual fragrance that attended it, and by the eloquent tributes paid him by the Guardian’s cables, as well as by the testimony of many friends. An extraordinary honor was shown him by the members of the National Spiritual Assembly, which body at the Guardian’s request, and in his behalf, journeyed to his grave, to offer prayers. Truly his was the victorious life.

“The true man appeareth before the Merciful like unto the Heavens. His bright and shining qualities are the stars. His traces are the educators of existence.” (Bahá’u’lláh, from the Will of Bahá’u’lláh).

It is impossible, even for those who love him, properly to evaluate his life, which the future alone will truly disclose. It may be said with absolute certainty, however, that he lived and moved in the Divine Teachings, and especially in his later years, in the advices, the assurances and the sympathetic understanding of the Guardian. the entire loyalty of a heart, singularly pure and devoted, turned completely toward his Guardian and the Guardian of the world.

In a letter to one of the American friends, Shoghi Effendi wrote:

“The passing of Mr. Lunt constitutes yet another blow to the American Bahá’í Community, and leaves a void in both the teaching and administrative fields, which few of our present day believers can fill. The memory of his manifold and undeniably rich and valuable services will be deeply enshrined in the hearts and minds of those who had the privilege of working closely with him, or had been sufficiently informed about his tireless activities for the Faith. . .

“Words fail to express the sorrow and regret I feel at the untimely death of such a precious, ardent and capable champion of our beloved Faith. The loss is indeed irreparable, for he was the living embodiment of such a rare combination of qualities as few can display and none can surpass. I will continue to pray for his dear departed soul from the depths of my sorrowful yet grateful heart.” 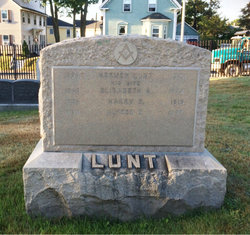 His immediate family-a widow and five children, and a host of friends mourn his loss. His funeral was attended by his relatives, neighbors and visiting Bahá’ís from Green Acre and neighboring centers. The service in its simplicity, contained the solace of Heavenly Teachings and prayers, and proved to be a means of teaching others the Faith that he loved.

The National Spiritual Assembly, on August 16, 1937, received the following cablegram from the Guardian: