He was patient, long-suffering, forbearing, shunning the stain of this earth. And since he was the family water carrier, he had the honor of coming into Bahá’u’lláh’s presence every day. 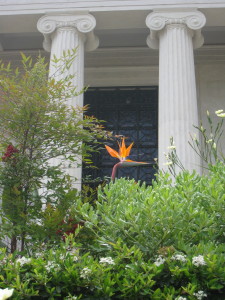 This man of God came from the district of Tafrísh. He was detached from the world, fearless, independent of kindred and stranger alike. He was one of the earliest believers, and belonged to the company of the faithful. It was in Persia that he won the honor of belief, and began to assist the friends; he was a servant to every believer, a trusted helper to every traveler. With Músáy-i-Qumí, upon whom be the glory of God, he came to Iraq, received his portion of bounty from the Light of the World, and was honored with entering the presence of Bahá’u’lláh, attending upon Him and becoming the object of bestowals and grace.

After a time, ‘Azím and Hájí Mírzá Músá went back to Persia, where he continued to render service to the friends, purely for God’s sake. Without wage or stipend he served Mírzá Nasru’lláh of Tafrísh for a number of years, his faith and certitude growing stronger with every passing day. Mírzá Nasru’lláh then left Persia for Adrianople, and in his company came Jináb-i-‘Azím, and entered the presence of Bahá’u’lláh. He kept on serving with love and loyalty, purely for the sake of God; and when the convoy departed for ‘Akká, ‘Azím received the distinction of accompanying Bahá’u’lláh, and he entered the Most Great Prison.

In the prison he was chosen to serve the Household; he became the water carrier both within doors and on the outside. He undertook many hard tasks in the barracks. He had no rest at all, day or night. ‘Azím—“the great, the magnificent”—was magnificent as to character. He was patient, long-suffering, forbearing, shunning the stain of this earth. And since he was the family water carrier, he had the honor of coming into Bahá’u’lláh’s presence every day.

He was a good companion to all the friends, a consolation to their hearts; he brought happiness to all of them, the present and the absent as well. Many and many a time, Bahá’u’lláh was heard to express His approval of this man. He always maintained the same inner condition; he was constant, never subject to change. He was always happy-looking. He did not know the meaning of fatigue. He was never despondent. When anyone asked a service of him, he performed it at once. He was staunch and firm in his faith, a tree that grew in the scented garden of God’s tenderness.

After he had served at the Holy Threshold for many long years, he hastened away, tranquil, serene, rejoicing in the tidings of the Kingdom, out of this swiftly fading life to the world that does not die. The friends, all of them, mourned his passing, but the Blessed Beauty eased their hearts, for He lavished grace and praise on him who was gone.

Mercies be upon ‘Azím from the Kingdom of Divine compassion; God’s glory be upon him, at nightfall and the rising of the sun.