He took up a staff and wandered away; over the mountains he went, across the plains, seeking and finding the mystics, his friends. 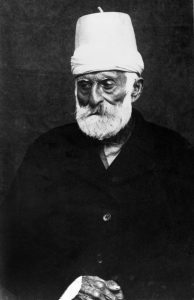 Another of those who left their homes and came to settle in the neighborhood of Bahá’u’lláh was Ḥájí Muḥammad Khán. This distinguished man, a native of Sístán, was a Balúch. When he was very young, he caught fire and became a mystic—an ‘áríf, or adept. As a wandering dervish, completely selfless, he went out from his home and, following the dervish rule, traveled about in search of his murshid, his perfect leader. For he yearned, as the Qalandar dervishes would say, to discover that “priest of the Magi,” or spiritual guide.

Far and wide, he carried on his search. He would speak to everyone he met. But what he longed for was the sweet scent of the love of God, and this he was unable to detect in anyone, whether Gnostic or philosopher, or member of the Shaykhí sect. All he could see in the dervishes was their tufted beards, and their palms-up religion of beggary. They were “dervish”—poor in all save God—in name only; all they cared about, it seemed to him, was whatever came to hand. Nor did he find illumination among the Illuminati; he heard nothing from them but idle argument. He observed that their grandiloquence was not eloquence and that their subtleties were but windy figures of speech. Truth was not there; the core of inner meaning was absent. For true philosophy is that which produces rewards of excellence, and among these learned men there was no such fruit to be found; at the peak of their accomplishment, they became the slaves of vice, led an unconcerned life and were given over to personal characteristics that were deserving of blame. To him, of all that constitutes the high, distinguishing quality of humankind, they were devoid.

As for the Shaykhí group, their essence was gone, only the dregs remained; the kernel of them had vanished, leaving the shell behind; most of their dialectics was lumber and superfluities by now.

Thus at the very moment when he heard the call from the Kingdom of God, he shouted, “Yea, verily!” and he was off like the desert wind. He traveled over vast distances, arrived at the Most Great Prison and attained the presence of Bahá’u’lláh. When his eyes fell upon that bright Countenance he was instantly enslaved. He returned to Persia so that he could meet with those people who professed to be following the Path, those friends of other days who were seeking out the Truth, and deal with them as his loyalty and duty required.

Both going and returning, the Ḥájí betook himself to each one of his friends, foregathered with them, and let each one hear the new song from Heaven. He reached his homeland and set his family’s affairs in order, providing for all, seeing to the security, happiness and comfort of each one. After that he bade them all goodbye. To his relatives, his wife, children, kin, he said: “Do not look for me again; do not wait for my return.”

He took up a staff and wandered away; over the mountains he went, across the plains, seeking and finding the mystics, his friends. On his first journey, he went to the late Mírzá Yúsuf Khán (Mustawfíyu’l-Mamálik), in Ṭihrán. When he had said his say, Yúsuf Khán expressed a wish, and declared that should it be fulfilled, he would believe; the wish was to be given a son. Should such a bounty become his, Yúsuf Khán would be won over. The Ḥájí reported this to Bahá’u’lláh, and received a firm promise in reply. Accordingly, when the Ḥájí met with Yúsuf Khán on his second journey, he found him with a child in his arms. “Mírzá,” the Ḥájí cried, “praise be to God! Your test has demonstrated the Truth. You snared your bird of joy.” “Yes,” answered Yúsuf Khán, “the proof is clear. I am convinced. This year, when you go to Bahá’u’lláh, say that I implore His grace and favor for this child, so that it may be kept safe in the sheltering care of God.”

Ḥájí Muḥammad then went to the blissful future martyr, the King of Martyrs, and asked him to intercede, so that he, the Ḥájí, might be allowed to keep watch at the doorway of Bahá’u’lláh. The King of Martyrs sent in this request by letter, after which Ḥájí Khán duly arrived at the Most Great Prison and made his home in the neighborhood of his loving Friend. He enjoyed this honor for a long time, and later, in the Mazra‘ih garden as well, he was very frequently in Bahá’u’lláh’s presence. After the Beloved had ascended, Ḥájí Khán remained faithful to the Covenant and Testament, shunning the hypocrites. At last, when this servant was absent on the journeys to crites. At last, when this servant was absent on the journeys to Europe and America, the Ḥájí made his way to the travelers’ hospice at the Ḥaẓíratu’l-Quds; and here, beside the Shrine of the Báb, he took his flight to the world above.

May God refresh his spirit with the musk-scented air of the Abhá Paradise, and the sweet savors of holiness that blow from the highest Heaven. Unto him be greetings and praise. His bright tomb is in Haifa.