Dr. Ugo Giachery headed the completion of the Shrine of the Bab in Haifa that was started by 'Abdu'l-Bahá; working closely with architect, William Sutherland Maxwell,. This project was directed by the head of the faith, Shoghi Effendi and called by him “the most sacred enterprise ever undertaken in the history of the Faith”. Shoghi Effendi named one of the nine doors of the Shrine after him. 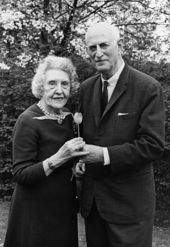 Dr. Ugo Giachery was born into an aristocratic family in Palermo, Sicily in 1896. He received a doctoral degree in Chemistry. After World War I he migrated to the United States where he met and married his wife Angeline Westergren and became a Bahá’í in 1926. They then moved to Italy in 1947 as Pioneer Bahá’í teachers.

Dr. Giachery translated a large number of Bahá’í books into Italian. From 1948 onwards he became heavily involved in securing marble and various building supplies for construction of the superstructure of the Shrine of the Bab and the International Archives building in Haifa, Israel.

In December 1951, Shoghi Effendi appointed Dr. Giachery as a Hand of the Cause of Gad and as a member-at-large of the International Bahá’í Council in March of 1952.  He was also elected chairman of the newly formed National Spiritual Assembly of Italy and Switzerland in 1953.

Dr. Ugo Giachery headed the completion of the Shrine of the Bab in Haifa that was started by ‘Abdu’l-Bahá; working closely with architect, William Sutherland Maxwell,.  This project was directed by the head of the faith, Shoghi Effendi and called by him “the most sacred enterprise ever undertaken in the history of the Faith”.  Shoghi Effendi named one of the nine doors of the Shrine after him. [1]

Dr. Giachery travelled extensively attending conferences and supporting Bahá’ís throughout the world. Thirty-five days of intensive travel in December and January by the Hand of the Cause Ugo Giachery took him half-way around the world to Western Samoa for his fourth visit to that country. Dr. Ugo Giachery, who was in Samoa on his return from the Intercontinental Conference in Sydney in October, 1967, was requested by the National Spiritual Assembly of the Bahá’ís of the South Pacific Ocean to present The Proclamation of Baha’u’-llah to the head of state of Western Samoa, which he was glad to do. An appointment was made, and in the late afternoon of October 27, 1967, His Highness Malietoa Tanumafili II received Dr. Giachery and the National Spiritual Assembly representative, Mr. Virgil Wilson, at a newly built Samoan fale on a tiny off-shore island at Letulatala Lefata. It was at this spot that His Highness had some years before been invested with the title “Malietoa”.

On January 16, 1968 he visited His Highness Malietoa Tanumafili II of Samoa on behalf of the Universal House of Justice and delivered the “Proclamation to the Kings” written by Bahá’u’lláh.

Dr. Giachery reported, “On arrival at the main entrance a triumphal chant was heard and His Highness rushed in person to the automobile with outstretched hands bidding us welcome. After the exchange of greetings, he led us along the main staircase to the large reception hall where we were seated…” During the course of the conversation which followed, the Malietoa declared,

Afterward the Hand of the Cause cabled the Universal House of Justice:

His Highness offered Dr. Giachery his chair and after exchanging courtesies the book was presented on behalf of the Universal House of Justice. The Malietoa was greatly pleased to receive it and thoughtfully leafed through its pages. The Hand of the Cause explained what the volume contained and drew attention to the list of kings and rulers to whom the original Tablets had been addressed. Throughout the conversation which lasted for almost ninety minutes many questions about the Faith were answered and His Highness expressed great interest in the Bahá’í Teachings. As Dr. Giachery prepared to take his leave, the Malietoa grasped his hands and expressed the hope that he would return some time for another visit. No one knew at that time how soon this hope was to be realized.

In early December, 1967, Dr. Giachery reported that he had recently received two letters from the American pioneer, Mr. Virgil Wilson, in which he stated that on more than one occasion the Malietoa had stated his desire to join the Faith. Because of the importance of the possibility that one of so high a rank and occupying a station which had been so greatly exalted by Bahá’u’lláh would embrace the Cause, the Universal House of Justice asked the Hand of the Cause Dr. Ugo Giachery to return to Western Samoa to discuss this matter  with His Highness. [2]

Dr. Giachery’s last visit to Samoa was in 1989. He passed away and is buried in Samoa, near the Bahá’í Temple.

Images:
Hand of the Cause of God Dr. Ugo Giachery and his wife, Angeline, in Italy in the early 1970s: bahaimedia.org
International Archives Building: bahaimedia.org

TagsBaha'i Dr. Ugo Giachery Hand of the Cause of God King of Samoa Samoa Shoghi Effendi Shrine of the Bab
FacebookTwitterPinterestLinkedIn