His Highness had heard about the Bahá'í Faith from his brother but it wasn’t until he received the “Proclamation to the Kings” written by Bahá’u’lláh from Hand of the Cause Dr. Ugo Giachery 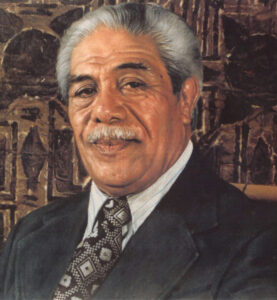 He was educated in both Samoa and New Zealand. He succeeded the Malietoa title in 1940 at the age of 27, following his fathers death on July 5, 1939. He married Masiofo Lili Tunu in 1940, the daughter of Molio’o Pouli Setu of Feleapuna and Tu’emanu Manu’a of Toamua, Upolu. He became the head of state in 1963 after the country gained it’s independence from New Zealand in 1962.

His Highness had heard about the Bahá’í Faith from his brother but it wasn’t until he received the “Proclamation to the Kings” written by Bahá’u’lláh from Hand of the Cause Dr. Ugo Giachery who visited Samoa on behalf of the Universal House of Justice on January 16, 1968. Dr. Giachery reported, “On arrival at the main entrance a triumphal chant was heard and His Highness rushed in person to the automobile with outstretched hands bidding us welcome. After the exchange of greetings, he led us along the main staircase to the large reception hall where we were seated…” During the course of the conversation which followed, the Malietoa declared, “I am a Bahá’í…I believe in Bahá’u’lláh.”

Afterward the Hand of the Cause cabled the Universal House of Justice: 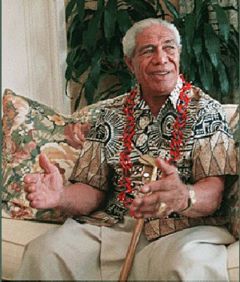 It is noteworthy that it was this Malietoa’s great-great-grandfater, Malietoa Tavita, who accepted Christianity in 1830 in response to the teaching work of John Williams of the London Missionary Society.

On February 11,1968, another meeting took place at the private residence of the Malietoa. His Highness showed keen interest and asked many questions as Dr. Giachery reviewed with him the principles of the Faith and its administration. Again he stated that he believed in Baha’u’llah and His Revelation. Within the hour, Dr. Giachery cabled the Universal House of Justice:

Later, on February 19, 1968, the Malietoa wrote the Universal House of Justice expressing appreciation for ” the beautiful and precious volume containing some letters addressed by Bahá’u’lláh, the exalted Founder of the Bahá’í Faith, to the rulers of His time…”, and added:

“This gift is immensely appreciated because it has assisted me in better understanding…the Teachings of Bahá’u’lláh, which I have fully and wholeheartedly accepted. I do consider myself a member of the Bahá’í Faith, even if at this time I do not deem it necessary to make a public declaration, but I do hope that your prayers at the Holy place of our Faith will attract upon me the divine assistance needed to carry on my duties and to increase my spiritual powers which will make of me a just and honored ruler. . .”

The following is an excerpt written by the Universal House of Justice on May 7, 1973: 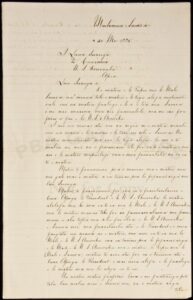 “His Highness decided, with the full agreement of the Universal House of Justice, that it was not propitious to make his declaration public at that time. He has been visited from time to time by Hands of the Cause and other believers, and continual touch with His Highness has been maintained by the House of Justice through Mr Suhayl ‘Alá’í, a member of the Continental Board of Counselors for Australasia. Gradually the Malietoa has let it be known to those around him that he has accepted Bahá’u’lláh. Now he has judged the time ripe to share this wondrous news with his fellow-believers in all parts of the world, by addressing to the International Bahá’í Convention the gracious and inspiring message of which a copy is enclosed with this letter. . . .”[1] 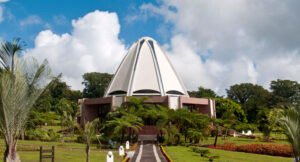 Three years after he declared, His Highness Malietoa Tanumafili II visited the grave of Shoghi Effendi in London England (September 12, 1976).

The purchase of the initial plot of Temple site land, situated at an elevation of 1,800 feet overlooking the city of Apia, was completed in November 1975. Since that time additional adjoining lots have been acquired to permit direct access to the Temple from the main road. At Ridvan 1978 Mr. Husayn ‘Amanat was appointed architect and in September of that year his design for the Temple was approved by the Universal House of Justice. On January 27, 1979, His Highness Malietoa Tanumafili II laid the foundation stone, and Amatu’l-Baha Ruhiyyih Khanum, the representative of the House of Justice, participated by placing in a niche in the stone a small casket of Dust from the Sacred Shrine of Bahá’u’lláh.  The colored sound motion picture entitled ‘Blessed Is the Spot’ recorded the ceremony and the conference which was held in Apia on the same week-end.

On September 1, 1984 His Highness gave the dedication of the House of Worship in Apia, Western Samoa and two years later his wife died in 1986.

His Highness Malietoa Tanumafili II died of a heart attack at the hospital where he was being treated for pneumonia. [2]

Some of the messages from World Leaders on his passing:

“I have learned with great sadness of the death of His Highness Malietoa Tanumafili II, I recall with pleasure my visit to Samoa, with Prince Philip, in 1977. I could see then the great affection and respect which the people of Samoa felt for him, earned by a long record of service to his nation. His Highness’s passing will be mourned widely throughout the Commonwealth.“Prince Philip joins me in sending our condolences to the Samoan people.”Her Majesty Queen Elizabeth IIUnited Kingdom [3]

I was shocked and saddened to learn of the passing away of His Highness, Malietoa Tanumafili II, Head of State of the Independent State of Samoa. On behalf of the Government and people of the People’s Republic of China, and in my own name, I wish to convey our deepest sympathy and sincerest condolences to the Government and people of Samoa, and to the bereaved family of His Highness.His Highness was a statesman of noble character and high prestige who made outstanding contributions to the independence and development of Samoa. As Head of State of Samoa, he was not only friendly to China but was also committed to maintaining and promoting the cordial and cooperative relations between Samoa and China, which the Chinese people will never forget.I hope and believe that the cause of friendship initiated by His Highness will be continuously consolidated and strengthened with joint efforts by both the Samoan and Chinese Governments.HU Jingtao, President
The People’s Republic of China[3]

“On behalf of the American people, I extend my deepest condolences to you and the people of Samoa on the death of His Highness Malietoa Tanumafili II. “For forty-five years, Malietoa promoted democracy, prosperity, and peace in his country and in the Pacific, values that we in the United States also share. Malietoa fostered a close relationship between our countries and peoples, especially through his contact with Amercian Samoa. His regular visits to American Samoa for the annual Flag Day festivities along with his sincerity, goodwill, and humility will be greatly missed.“As you and the people of Samoa mourn the loss of His Highess Malietoa Tanumafili II, please know that the people of the United States stand at your side.”
George W. Bush, U.S President
United States of America [3]