In May 1878, his travel teaching took Siyyid Mustafa Rumi to Myanmar (Burma). There he would, not yet knowing the local language, together with Jamal Effendi and Haji Siyyid Mihdi, lay the foundation for the Burmese Bahá’í community. Starting in 1879, their teaching endeavors took them to Mandalay, to Rangoon (Yangon) in 1880, to different cities in India, including Madras, for consolidation efforts, and they should eventually embark for Singapore, beginning their long travel teaching throughout Southeast Asia. 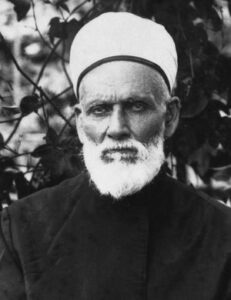 “We can truly say that this Cause is a cause that enables people to achieve the impossible! For the Bahá’ís, everywhere, for the most part, are people with no great distinguishments of either wealth or fame, and yet once they make the effort and go forth in the name of Bahá’u’lláh to spread His Faith, they become, each one, as efficacious as a host! Witness what Mustafa Raumie accomplished in Burma…! It is the quality of devotion and self-sacrifice that brings rewards in the service of this Faith rather than means, ability or financial backing.” [1]

In 1945, the year of Siyyid Mustafa Rumi’s passing, the Guardian of the Bahá’í Faith Shoghi Effendi wrote to the Burmese and Indian Bahá’í community three times bemoaning the passing of this “bright star of the Faith”. The outpouring of his sadness and appreciation culminated in the posthumous appointment of Mustafa Rumi to the exalted rank of Hand of the Cause of God.

The Hands of the Cause of God “are to diffuse the Divine Fragrances, to edify the souls of men, to promote learning, to improve the character of all men and to be, at all times and under all conditions, sanctified and detached from earthly things. They must manifest the fear of God by their conduct, their manners, their deeds and their words.” [2]  Siyyid Mustafa Rumi’s life sheds light on the meaning of the words above.

He was born into a noble Shi’i family and was brought up by his maternal uncle after the passing of his mother just a few days following Mustafa Rumi’s birth.[3]He was a spiritual person and devoted to observing the religious duties of Islam. Able to speak several languages, among them Arabic, Persian, Hindi, Tamil, Gujarati, Urdu, Burmese, as well as English, he moved to Madras, India, in his youth to assist his father in the business of the rice trade and to set up his own business of trading cashmere woolen shawls.

In his early 20s he eventually decided to return to Iraq for better business opportunities, but that decision should never turn into reality.

Shortly before his departure from Madras in 1876, Mustafa Rumi attended a philosophical discussion and encountered Jamal Effendi, the first Bahá’í teacher to India. Jamal Effendi had been sent to India by Bahá’u’lláh in 1875. Right away, Mustafa Rumi was enamored with Jamal Effendi and the new Revelation he spoke about. He instantly retreated from his plans to return to Iraq for business, and instead decided to go on a long teaching trip with Jamal Effendi to Rampur and northern India, a teaching endeavor that should turn into a ten-year long period of travel teaching spent together with Jamal Effendi.

“I soon became so devotedly attached to him that I actually approached my father, Siyyid Muhammad, celebrated as Roumie, for permission to accompany Jamal Effendi to Rampur. My father, who was a very learned Muslim divine and held in great esteem and reverence by the Muslim public, did not approve of the proposal; and although he did not exactly know that the theme of Jamal Effendi’s talk was the Baha’i Revelation, yet he not only refused permission but even prohibited me from entering his house. I was determined, however, to accompany Jamal Effendi to Rampur and succeeded in doing so.” [4]

It was on this months-long trip to northern India, in Calcutta at the end of 1877, that Jamal Effendi asked Mustafa Rumi to chant the Lawh-i-Ra’is after discussing Bahá’u’lláh’s prophecies for Turkey with some other Bahá’ís. Rumi’s response to the Lawh-i-Ra’is was humble astonishment and his spiritual awakening to the truth of Bahá’u’lláh’s Revelation. Jamal Effendi informed Bahá’u’lláh of this declaration of Faith and Rumi received a tablet from the Blessed Beauty.

His love for God translated into instant teaching and consolidation activities. Indeed, Mustafa Rumi combined the strength of attracting people to the new Cause and deepening them in the verities thereof. As such, he exemplified the meaning of a true and systematic teacher accompanying seekers on the path of individual transformation. He also assisted them in forming small groups at first, nuclei, that would serve as a growing foundation for emerging Local Spiritual Assemblies. Therefore, he did not only excel in the expansion efforts, but also shone in the consolidation endeavors.

“If he heard that there was an inquirer he would walk long distances and visit the inquiring soul and many a time he succeeded in scraping away the dross and bringing out the reality buried beneath the litter and rubbish of tradition and imitation. His method was to make the inquirer, in the first instance, self-sufficing in his search for the truth. He would remove his doubts about his capability to understand religions subjects. He would eliminate from his mind the attitude of dependence upon so-called religious leaders. He would then lead him to sift out the truth from the motley of dogmas and man-made beliefs inherited from the ancestors. He would build his argument on the knowledge of the inquirer and convince him of the Truth proclaimed by Bahá’u’lláh.”[5]

In May 1878, his travel teaching took Siyyid Mustafa Rumi to Myanmar (Burma). There he would, not yet knowing the local language, together with Jamal Effendi and Haji Siyyid Mihdi, lay the foundation for the Burmese Bahá’í community.

Starting in 1879, their teaching endeavors took them to Mandalay, to Rangoon (Yangon) in 1880, to different cities in India, including Madras, for consolidation efforts, and they should eventually embark for Singapore, beginning their long travel teaching throughout Southeast Asia. From Singapore, they travelled to Java, Bali, Celebes, Siam, Malaya, and back to Rangoon. It was upon their return to Rangoon that their ways eventually parted, with Jamal Effendi returning to India and Rumi staying in Burma to help grow the Burmese community.

Many might know that the wooden casket containing the remains of the Báb and Anis was laid into a marble sarcophagus in 1909 before being interred in the Shrine. That beautiful marble sarcophagus was made by the Burmese Bahá’ís in 1898, and Rumi was one of three local Bahá’ís who helped pay for it. He was also among the local friends carrying it as a gift to Abdu’l-Baha in the Holy Land in 1899.

In Rangoon, in 1886, he got married and settled into the trading business of her family. However, in 1910, he experienced professional and personal loss by a failing business and the passing of his wife. This allowed him to return to dedicate his every hour to the service of the Cause.

And eloquent speaker and writer, he wrote a thesis on the history and teachings of the Bahá’í Faith for the All-India Conference of Religions in 1911. He also translated the Book of Certitude, The Hidden Words, Bahá’í Prayers, and Some Answered Questions into Burmese to provide the believers with Primary Literature for their own independent investigation of the Truth.  He continued his teaching efforts and established the Bahá’í communities in the town Kungyangoon, and the village Daidanaw, where around 800 soul accepted the message of Bahá’u’lláh’s Revelation. Never one to leave new believers on their own, he started a school in the village, an undertaking that was strongly encouraged by the Guardian to be continued in later years.

At the time of the passing of the Blessed Beauty as well as at the time of the passing of ‘Abdu’l-Bahá, many a Bahá’ís steadfastness was tested by the evil actions of the covenant breakers. In both of these testing situations, Siyyid Mustafa Rumi radiated inner strength and an immoveable Faith in the power of the Covenant, first by unhesitatingly accepting the appointment of ‘Abdu’l-Bahá as Baha’u’llah’s successor and later in his unwavering trust in the appointment of the young Shoghi Effendi as Guardian of the Faith. Thanks to his firm consolidation of the believers, he was able to ensure no lasting impact of the outrageous propagation of the enemies of the Faith on both occasions.

In the fields of teaching and deepening, translation, as well as administration, he dedicated his entire life to the service to the Cause of God, to Bahá’u’lláh, the Master, and his beloved Guardian. Shoghi Effendi described him as “truly an example of steadfast devotion and one of the outstanding pioneers the Faith produced during the first century of its existence”. He served on the National Spiritual Assembly of India and Burma and later in life he pioneered to the village of Daidanaw, where his earthly life would come to an end at the hands of enemies.

Many Bahá’í’s gathered in Daidanaw during the Second World War, when attacks against ethnic and religious minorities were particularly vile. At that point, there was not only a Bahá’í school in the village, but also a Haziratu’l-Quds (Bahá’í Center). Rumi was advised by his fellow believers to leave the village due to the lingering danger of an attack. But Mustafa Rumi had chosen his pioneering post and refused to leave his place of service for any reason. 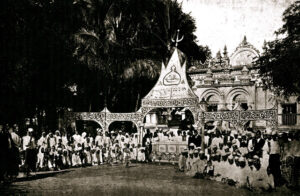 On March 13, 1945, the attackers arrived. They burned many of the Bahá’í homes and caused the violent death of eleven Bahá’ís. Among the friends that sacrificed their lives on that fateful day was Siyyid Mustafa Rumi, whom the attackers beheaded and chopped into pieces. Bahá’í friends were later able to gather his body and bury it in front of the Haziratu’l-Quds.

In a cable from Shoghi Effendi on July 14, 1945, Siyyid Mustafa Rumi was posthumously named Hand of the Cause of God and his resting place was named the foremost shrine in the community of the Burmese believers.

“Hearts griefstricken passing Supreme Concourse distinguished pioneer Faith Baha’u’llah, dearly beloved staunch high minded noble soul Siyyid Mustafa. Long record his superb services (in) both teaching (and) administrative fields shed lustre on both heroic and formative ages (of) Baha’i Dispensation. His magnificent achievements fully entitle him join ranks (of the) Hands of (the) Cause (of) Baha’u’llah. His resting place should be regarded foremost shrine (in the) community of Burmese believers…”

TagsBaha'i Hand of the Cause of God Siyyid Mustafa Rumi
FacebookTwitterPinterestLinkedIn