He lived apart from friend and stranger alike, lamenting night and day, moaning and chanting prayers. There he remained as a recluse, and waited for the doors to open. 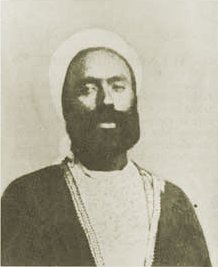 Still another of those who emigrated from their native land to be near Bahá’u’lláh was the great Nabíl. In the flower of youth he bade farewell to his family in Zarand and with Divine aid began to teach the Faith. He became a chief of the army of lovers, and on his quest he left Persian ‘Iráq for Mesopotamia, but could not find the One he sought. For the Well-Beloved was then in Kurdistán, living in a cave at Sar-Galú; and there, entirely alone in that wasteland, with no companion, no friend, no listening soul, He was communing with the beauty that dwelt in His own heart. All news of Him was completely cut off; ‘Iráq was eclipsed, and in mourning.

When Nabíl discovered that the flame which had once been kindled and tended there was almost out, that the believers were few, that Yaḥyá had crawled into a secret hole where he lay torpid and inert, and that a wintry cold had taken over—he found himself obliged to leave, bitterly grieving, for Karbilá. There he stayed until the Blessed Beauty returned from Kurdistán, making His way to Baghdád. At that time there was boundless joy; every believer in the country sprang to life; among them was Nabíl, who hastened to the presence of Bahá’u’lláh, and became the recipient of great bestowals. He spent his days in gladness now, writing odes to celebrate the praises of his Lord. He was a gifted poet, and his tongue most eloquent; a man of mettle, and on fire with passionate love.

After a time he returned to Karbilá, then came back to Baghdád and from there went on to Persia. Because he associated with Siyyid Muḥammad he was led into error and sorely afflicted and tried; but like the shooting stars, he became as a missile to drive off satanic imaginings, and he repulsed the evil whisperers and went back to Baghdád, where he found rest in the shade of the Holy Tree. He was later directed to visit Kirmansháh. He returned again, and on every journey was enabled to render a service.

Bahá’u’lláh and His retinue then left Baghdád, the “Abode of Peace,” for Constantinople, the “City of Islám.” After His departure, Nabíl put on the dress of a dervish, and set out on foot, catching up with the convoy along the way. In Constantinople he was directed to return to Persia and teach the Cause of God; also to travel throughout the country, and acquaint the believers in its cities and villages with all that had taken place. When this mission was accomplished, and the drums of “Am I not your Lord?” were rolling out—for it was the “year eighty” Nabíl hurried to Adrianople, crying as he went, “Yea verily Thou art! Yea verily!” and “Lord, Lord, here am I!”

He entered Bahá’u’lláh’s presence and drank of the red wine of allegiance and homage. He was then given specific orders to travel everywhere, and in every region to raise the call that God was now made manifest: to spread the blissful tidings that the Sun of Truth had risen. He was truly on fire, driven by restive love. With great fervor he would pass through a country, bringing this best of all messages and reviving the hearts. He flamed like a torch in every company, he was the star of every assemblage, to all who came he held out the intoxicating cup. He journeyed as to the beat of drums and at last he reached the ‘Akká fortress.

In those days the restrictions were exceptionally severe. The gates were shut, the roads closed off. Wearing a disguise, Nabíl arrived at the ‘Akká gate. Siyyid Muḥammad and his wretched accomplice immediately hurried to the Governorate and informed against the traveler. “He is a Persian,” they reported. “He is not, as he seems, a man of Bukhárá. He has come here to seek for news of Bahá’u’lláh.” The authorities expelled him at once.

Nabíl, despairing, withdrew to the town of Safád. Later he came on to Haifa, where he made his home in a cave on Mount Carmel. He lived apart from friend and stranger alike, lamenting night and day, moaning and chanting prayers. There he remained as a recluse, and waited for the doors to open. When the predestined time of captivity was over, and the gates were flung wide, and the Wronged One issued forth in beauty, in majesty and glory, Nabíl hastened to Him with a joyful heart. Then he used himself up like a candle, burning away with the love of God. Day and night he sang the praises of the one Beloved of both worlds and of those about His threshold, writing verses in the pentameter and hexameter forms, composing lyrics and long odes. Almost daily, he was admitted to the presence of the Manifestation.

This went on until the day Bahá’u’lláh ascended. At that supreme affliction, that shattering calamity, Nabíl sobbed and trembled and cried out to Heaven. He found that the numerical value of the word “shidád”—year of stress—was 309, and it thus became evident that Bahá’u’lláh foretold what had now come to pass.

Utterly cast down, hopeless at being separated from Bahá’u’lláh, fevered, shedding tears, Nabíl was in such anguish that anyone seeing him was bewildered. He struggled on, but the only desire he had was to lay down his life. He could suffer no longer; his longing was aflame in him; he could stand the fiery pain no more. And so he became king of the cohorts of love, and he rushed into the sea.

Before that day when he offered himself up, he wrote out the year of his death in the one word: “Drowned.” Then he threw down his life for the Well-Beloved, and was released from his despair, and no longer shut away.

This distinguished man was erudite, wise, and eloquent of speech. His native genius was pure inspiration, his poetic gift like a crystal stream. In particular his ode “Bahá, Bahá!” was written in sheer ecstasy. Throughout all his life, from earliest youth till he was feeble and old, he spent his time serving and worshiping the Lord. He bore hardships, he lived through misfortunes, he suffered afflictions. From the lips of the Manifestation he heard marvelous things. He was shown the lights of Paradise; he won his dearest wish. And at the end, when the Daystar of the world had set, he could endure no more, and flung himself into the sea. The waters of sacrifice closed over him; he was drowned, and he came, at last, to the Most High.

Upon him be abundant blessings; upon him be tender mercies. May he win a great victory, and a manifest grace in the Kingdom of God.

Editor’s Note:
Nabíl is also known as Mullá Muḥammad-i-Zarandí and is most famous for writing ‘The Dawn Breakers’. He was 16 when he learned about the Faith and at 20 years old he met Bahá’u’lláh. After he learned of Bahá’u’lláh’s death in 1892 he drowned himself (as mentioned above) and his body was found near the city of `Akká and is buried in the ‘Old Acre Muslim Cemetery’ (Hatzafon the Northern District in Israel).