He was a universal man, in himself alone a convincing proof. When his eyes were opened to the light of Divine guidance, and he breathed in the fragrances of Heaven, he became a flame of God. 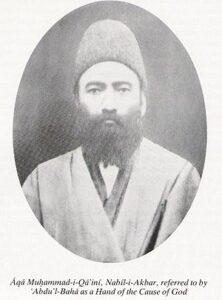 There was, in the city of Najaf, among the disciples of the widely known mujtahid, Shaykh Murtadá, a man without likeness or peer. His name was Áqá Muḥammad-i-Qá’iní, and later on he would receive, from the Manifestation, the title of Nabíl-i-Akbar. This eminent soul became the leading member of the mujtahid’s company of disciples. Singled out from among them all, he alone was given the rank of mujtahid—for the late Shaykh Murtadá was never wont to confer this degree.

He excelled not only in theology but in other branches of knowledge, such as the humanities, the philosophy of the Illuminati, the teachings of the mystics and of the Shaykhí School. He was a universal man, in himself alone a convincing proof. When his eyes were opened to the light of Divine guidance, and he breathed in the fragrances of Heaven, he became a flame of God. Then his heart leapt within him, and in an ecstasy of joy and love, he roared out like leviathan in the deep.

With praises showered upon him, he received his new rank from the mujtahid. He then left Najaf and came to Baghdád, and here he was honored with meeting Bahá’u’lláh. Here he beheld the light that blazed on Sinai in the Holy Tree. Soon he was in such a state that he could rest neither day nor night.

One day, on the floor of the outer apartments reserved for the men, the honored Nabíl was reverently kneeling in the presence of Bahá’u’lláh. At that moment Ḥájí Mírzá Ḥasan-‘Amú, a trusted associate of the mujtahids of Karbilá, came in with Zaynu’l-Ábidín Khán, the Fakhru’d-Dawlih. Observing how humbly and deferentially Nabíl was kneeling there, the Ḥájí was astonished.

“Sir,” he murmured, “what are you doing in this place?”

Nabíl answered, “I came here for the same reason you did.”

The two visitors could not recover from their surprise, for it was widely known that this personage was unique among mujtahids and was the most favored disciple of the renowned Shaykh Murtadá.

Later, Nabíl-i-Akbar left for Persia and went on to Khurásán. The Amír of Qá’in—Mír Álam Khán—showed him every courtesy at first, and greatly valued his company. So marked was this that people felt the Amír was captivated by him, and indeed he was spellbound at the scholar’s eloquence, knowledge, and accomplishments. One can judge, from this, what honors were accorded to Nabíl by the rest, for “men follow the faith of their kings.”

Nabíl spent some time thus esteemed and in high favor, but the love he had for God was past all concealing. It burst from his heart, flamed out and consumed its coverings.

A thousand ways I tried
My love to hide—
But how could I, upon that blazing pyre
Not catch fire!

He brought light to the Qá’in area and converted a great number of people. And when he had become known far and wide by this new name, the clergy, envious and malevolent, arose, and informed against him, sending their calumnies on to Ṭihrán, so that Náṣiri’d-Dín Sháh rose up in wrath. Terrified of the Sháh, the Amír attacked Nabíl with all his might. Soon the whole city was in an uproar, and the populace, lashed to fury, turned upon him.

That enraptured lover of God never gave way, but withstood them all. At last, however, they drove him out—drove out that man who saw what they did not—and he went up to Ṭihrán, where he was a fugitive, and homeless.

Here, his enemies struck at him again. He was pursued by the watchmen; guards looked everywhere for him, asking after him in every street and alley, hunting him down to catch and torture him. Hiding, he would pass by them like the sigh of the oppressed, and rise to the hills; or again, like the tears of the wronged, he would slip down into the valleys. He could no longer wear the turban denoting his rank; he disguised himself, putting on a layman’s hat, so that they would fail to recognize him and would let him be.

In secret, with all his powers he kept on spreading the Faith and setting forth its proofs, and was a guiding lamp to many souls. He was exposed to danger at all times, always vigilant and on his guard. The Government never gave up its search for him, nor did the people cease from discussing his case.

He left, then, for Bukhárá and Ishqábád, continuously teaching the Faith in those regions. Like a candle, he was using up his life; but in spite of his sufferings he was never dispirited, rather his joy and ardor increased with every passing day. He was eloquent of speech; he was a skilled physician, a remedy for every ill, a balm to every sore. He would guide the Illuminati by their own philosophical principles, and with the mystics he would prove the Divine Advent in terms of “inspiration” and the “celestial vision.” He would convince the Shaykhí leaders by quoting the very words of their late Founders, Shaykh Aḥmad and Siyyid Kázim, and would convert Islamic theologians with texts from the Qur’án and traditions from the Imáms, who guide mankind aright. Thus he was an instant medicine to the ailing, and a rich bestowal to the poor.

He became penniless in Bukhárá and a prey to many troubles, until at the last, far from his homeland, he died, hastening away to the Kingdom where no poverty exists.

Nabíl-i-Akbar was the author of a masterly essay demonstrating the truth of the Cause, but the friends do not have it in hand at the present time. I hope that it will come to light, and will serve as an admonition to the learned. It is true that in this swiftly passing world he was the target of countless woes; and yet, all those generations of powerful clerics, those shaykhs like Murtadá and Mírzá Habíbu’lláh and Áyatu’lláh-i-Khurásání and Mullá Asadu’lláh-i-Mazandarání—all of them will disappear without a trace. They will leave no name behind them, no sign, no fruit. No word will be passed down from any of them; no man will tell of them again. But because he stood steadfast in this holy Faith, because he guided souls and served this Cause and spread its fame, that star, Nabíl, will shine forever from the horizon of abiding light.

It is clear that whatever glory is gained outside the Cause of God turns to abasement at the end; and ease and comfort not met with on the path of God are finally but care and sorrow; and all such wealth is penury, and nothing more.

A sign of guidance, he was, an emblem of the fear of God. For this Faith, he laid down his life, and in dying, triumphed. He passed by the world and its rewards; he closed his eyes to rank and wealth; he loosed himself from all such chains and fetters, and put every worldly thought aside. Of wide learning, at once a mujtahid, a philosopher, a mystic, and gifted with intuitive sight, he was also an accomplished man of letters and an orator without a peer. He had a great and universal mind.

Praise be to God, at the end he was made the recipient of heavenly grace. Upon him be the glory of God, the All-Glorious. May God shed the brightness of the Abhá Kingdom upon his resting-place. May God welcome him into the Paradise of reunion, and shelter him forever in the realm of the righteous, submerged in an ocean of lights.