He was among the most noted of mystics, and had a witty and subtle mind. The fame of this spiritual wayfarer reached out to every land. He was the leading calligrapher of Persia and well known to all the great; he enjoyed a special position among the court ministers of Ṭihrán, and with them he was solidly established. 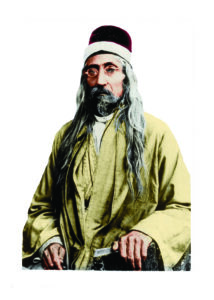 Among the exiles, neighbors, and prisoners there was also a second Mír ‘Imád, the eminent calligrapher, Mishkín-Qalam. He wielded a musk-black pen, and his brows shone with faith. He was among the most noted of mystics, and had a witty and subtle mind. The fame of this spiritual wayfarer reached out to every land. He was the leading calligrapher of Persia and well known to all the great; he enjoyed a special position among the court ministers of Ṭihrán, and with them he was solidly established. He was famed throughout Asia Minor; his pen was the wonder of all calligraphers, for he was adept at every calligraphic style. He was besides, for human virtues, a bright star.

This highly accomplished man first heard of the Cause of God in Iṣfahán, and the result was that he set out to find Bahá’u’lláh. He crossed the great distances, measured out the miles, climbing mountains, passing over deserts and over the sea, until at last he came to Adrianople. Here he reached the heights of faith and assurance; here he drank the wine of certitude. He responded to the summons of God, he attained the presence of Bahá’u’lláh, he ascended to that apogee where he was received and accepted. By now he was reeling to and fro like a drunkard in his love for God, and because of his violent desire and yearning, his mind seemed to wander. He would be raised up, and then cast down again; he was as one distracted. He spent some time under the sheltering grace of Bahá’u’lláh, and every day new blessings were showered upon him. Meanwhile he produced his 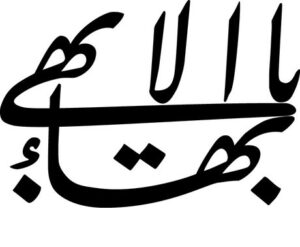 splendid calligraphs; he would write out the Most Great Name, Yá Bahá’u’l-Abhá, O Thou Glory of the All-Glorious, with marvelous skill, in many different forms, and would send them everywhere.

He was then directed to go on a journey to Constantinople, and set out with Jináb-i-Sayyáḥ. When he reached that Great City, the leading Persians and Turks received him with every honor at first, and they were captivated by his jet black, calligraphic art. He, however, began boldly and eloquently to teach the Faith. The Persian ambassador lurked in ambush; betaking himself to the Sulṭán’s vazírs he slandered Mishkín-Qalam. “This man is an agitator,” the ambassador told them, “sent here by Bahá’u’lláh to stir up trouble and make mischief in this Great City. He has already won over a large company, and he intends to subdue still more. These Bahá’ís turned Persia upside down; now they have started in on the capital of Turkey. The Persian Government put 20,000 of them to the sword, hoping by this tactic to quench the fires of sedition. You should awaken to the danger; soon this perverse thing will blaze up here as well. It will consume the harvest of your life; it will burn up the whole world. Then you can do nothing, for it will be too late.”

Actually that mild and submissive man, in that throne city of Asia Minor, was occupied solely with his calligraphy and his worship of God. He was striving to bring about not sedition but fellowship and peace. He was seeking to reconcile the followers of different faiths, not to drive them still further apart. He was of service to strangers and was helping to educate the native people. He was a refuge to the hapless and a horn of plenty to the poor. He invited all comers to the oneness of humankind; he shunned hostility and malice. 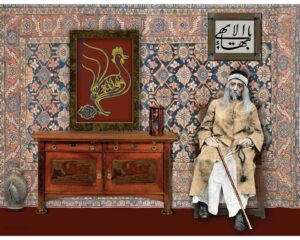 The Persian ambassador, however, wielded enormous power, and he had maintained close ties with the ministers for a very long time. He prevailed on a number of persons to insinuate themselves into various gatherings and there to make every kind of false charge against the believers. Urged on by the oppressors, spies began to surround Mishkín-Qalam. Then, as instructed by the ambassador, they carried reports to the Prime Minister, stating that the individual in question was stirring up mischief day and night, that he was a troublemaker, a rebel and a criminal. The result was, they jailed him and they sent him away to Gallipoli, where he joined our own company of victims. They despatched him to Cyprus and ourselves to the ‘Akká prison. On the island of Cyprus, Jináb-i-Mishkín was held prisoner in the citadel at Famagusta, and in this city he remained, a captive, from the year 1885 till 1894.

When Cyprus passed out of Turkish hands, Mishkín-Qalam was freed and betook himself to his Well-Beloved in the city of ‘Akká, and here he lived encompassed by the grace of Bahá’u’lláh, producing his marvelous calligraphs and sending them about. He was at all times joyous of spirit, ashine with the love of God, like a candle burning its life away, and he was a consolation to all the believers.

After the ascension of Bahá’u’lláh, Mishkín-Qalam remained loyal, solidly established in the Covenant. He stood before the violators like a brandished sword. He would never go half way with them; he feared no one but God; not for a moment did he falter, nor ever fail in service.

Following the ascension he made a journey to India, where he associated with the lovers of truth. He spent some time there, making fresh efforts every day. When I learned that he was getting helpless, I sent for him at once and he came back to this Most Great Prison, to the joy of the believers, who felt blessed to have him here again. He was at all times my close companion. He had amazing verve, intense love. He was a compendium of perfections: believing, confident, serene, detached from the world, a peerless companion, a wit—and his character like a garden in full bloom. For the love of God, he left all good things behind; he closed his eyes to success, he wanted neither comfort nor rest, he sought no wealth, he wished only to be free from the defilement of the world. He had no ties to this life, but spent his days and nights supplicating and communing with God. He was always smiling, effervescing; he was spirit personified, love embodied. For sincerity and loyalty he had no match, nor for patience and inner calm. He was selflessness itself, living on the breaths of the spirit.

If he had not been in love with the Blessed Beauty, if he had not set his heart on the Realm of Glory, every worldly pleasure could have been his. Wherever he went, his many calligraphic styles were a substantial capital, and his great accomplishment brought him attention and respect from rich and poor alike. But he was hopelessly enamored of man’s one true Love, and thus he was free of all those other bonds, and could float and soar in the spirit’s endless sky.

Finally, when I was absent, he left this darksome, narrow world and hastened away to the land of lights. There, in the haven of God’s boundless mercy, he found infinite rewards. Unto him be praise and salutations, and the Supreme Companion’s tender grace.