In 1958, she and her husband established a foundation to support projects in the developing world. She was also instrumental in providing early support for the New Era High School and the New Era Development Institute in India. 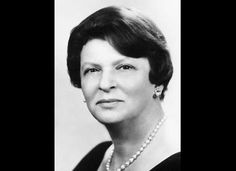 
Mildred Mottahedeh was born Mildred Root in Seabright, New Jersey in 1908. She met and married Rafi Y. Mottahedeh, an Iranian-born importer, in 1929 and became a member of the Bahá’í Faith. In that same year (1929) the couple founded Mottahedeh & Company in Manhattan, which rose to prominence as one of the most prestigious firms in the reproduction of porcelain, producing some 1,500 different items for more than 3,000 stores, from Tiffany’s to small gift boutiques. The company also reproduced pieces in the collections of museums like the Metropolitan and the Museum of Modern Art in New York and the Musee des Arts Decoratifs in Paris for sale in their shops. Mottahedeh reproductions have graced the White House as well as the reception rooms of the State Department in Washington.

In addition to being a business woman, Mottahedeh served at many levels on Bahá’í administrative councils, including as a long-serving member of the International Bahá’í Council. As an early advocate of the United Nations, she was present in San Francisco at the signing of the Charter and in 1948 became the Bahá’í International Community’s first representative to the UN, a position she held until October 1967. Mottahedeh was also active in promoting social and economic development. In 1958, she and her husband established a foundation to support projects in the developing world. She was also instrumental in providing early support for the New Era High School and the New Era Development Institute in India.

“Her more than half a century of tireless endeavor in [Bahá’í] service involved her in teaching and administrative activities at the local, national, continental and international levels,” wrote the Universal House of Justice, the international Bahá’í governing council, in a message announcing her passing in 2000. “At the same time, she maintained a rigorous schedule as a business woman, a contributor to the arts, and a promoter of humanitarian works. To these manifold tasks, she brought the combined resources of a selfless spirit, a compassionate heart, a creative mind, a practical sense, and a leonine will tempered by humility, candor and wit.”