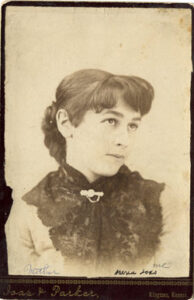 “Share grief (at) passing (of) esteemed veteran (of) Faith, Maria Ioas. Soul rejoicing (in the) Abha Kingdom (at the) services rendered (by her) dear son (at the) World Center (of the) Faith (in the) triple function (of) Hand (of the) Cause, Secretary-General (of the) Council (and) Supervisor (of) construction (of the) dome (of the) Báb’s Sepulcher.”-SHOGHI

Maria’s childhood was quite lonely because of a series of events that deprived her of her loved ones. Her father was killed in the Franco-Prussian war when she was three, her mother died when she was five, and shortly thereafter, her twin sister was taken from her to live in France. She herself went to live with an aunt and uncle in Munich, but through the years she never forgot her lovely mother and sister. So lonely was she as a child that at six years of age she would take all her dolls to bed with her, calling them her brothers and sisters. Often she would find herself on the floor because her “family” took all the room! She vowed that when she grew up she would have at least twelve children, so none would ever be lonely, and twelve she did have, although two died in infancy.

All her love and joy circled around her family and her religion. Never was there a mother who could more greatly inspire her children, and at the same time arouse such a great protective spirit within them one of undying love and devotion.

Hers was a happy disposition, even though her life was a difficult one. “Why are you always so happy?” a friend once asked her. “You have nothing to be happy about.” “Oh, but I have,” she replied. “When I look about me and see how little others have, I realize I have so much more, so how could I help but be grateful to God and be happy!” “That’s the trouble with you,” said her friend, “you always look at those who have less than you, instead of those who have more.” Mother had not yet heard of the Bahá’í Teachings and “radiant acquiescence,” but they were in her heart, nevertheless.

When she was in her sixteenth year her aunt and uncle brought her to visit America. With the group was her cousin’s college roommate, whom she later married. She and her husband never returned to Germany.

Father was a Lutheran and mother was raised in the Catholic Faith. However, they were always seeking, and later both joined the Methodist Church but this did not seem to satisfy their spiritual needs either. For many years father had been looking for the return of Christ. When he was young, his mother, a very religious woman, had told him that she felt the time was imminent for Christ’s return, that she probably would not live to see this, but that he might do so. Thus he was always looking for and buying books dealing with the interpretation of the Book of Revelation and any other information that might help him in his search for the return of Christ. After hearing of the Bahá’í Faith, he and mother were most happy to attend the classes of Mr. Paul Dealy of Chicago, even though it meant an hour’s ride each way on streetcars, involving several transfers. Mother said she had prayed for seventeen years to find a religion that would satisfy her. There always seemed to be a curtain before her and in back of that curtain was what she was seeking. 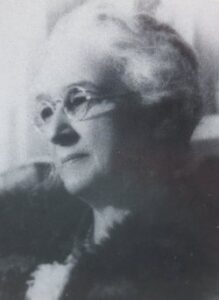 When, after the twelfth lesson, Mr. Dealy told the class that Christ had returned and he gave them the name of Bahá’u’lláh, they were overcome, and the curtain seemed to lift for mother. She knew at once that this was what she had been seeking. She and father wrote their supplication to ‘Abdu’l-Baha that very night [July 7, 1898], stating their belief in this Truth and asking to be accepted by Him as Bahá’ís. Their hearts were flooded with joy. The following day their ninth child was born.

When ‘Abdu’l-Bahá came to America in 1912, my parents and the family had the privilege of seeing Him a number of times in Chicago. For many years mother had longed for a flower which His blessed hands had touched and she was often tempted to ask pilgrims going to ‘Akka to secure one for her if possible. However, in her humble way she felt that if ‘Abdu’l-Bahá wanted her to have one, she would receive it. The first day that ‘Abdu’l-Bahá was in Chicago, she went with one of her children to the Plaza Hotel to see Him. ‘Abdu’l-Bahá was out, so they waited for Him all afternoon. They were in the hall when He came out of the elevator and lovingly greeted them. Walking toward His room, He said, “Come, come.” Mother knew He was tired and hesitated to follow, but He turned again and said, “Come, come.” So she and her son followed Him to His reception room. In a few minutes He came out of His room with some roses and walking over graciously handed one of them to her. Mother said afterward, “He looked at me with those eyes that could read one’s very soul. There was no need of His telling me, ‘This is the flower you have wished for these many years.’ “ 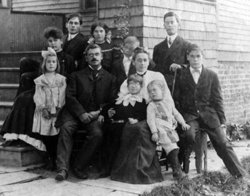 Alwavs mother and father promoted the Faith as best they could, telling neighbors and friends of the Glad Tidings, but dedicated as they were, they did not neglect their children. Study classes were held in the home every week for them and such friends as might care to come.

When the call came to start a children’s class in Chicago, mother promptly offered her services and taught for a number of years. Children always loved her and she gently instilled in them the Bahá’í  teachings -God is love; Bahá’u’lláh has come, the great Universal Prophet for this New Day; His Forerunner, the Báb, with His charm, love and devotion, bringing the Glad Tidings; ‘Abdu’l-Bahá, the beloved Exemplar, Interpreter and Center of the Covenant; Shoghi Effendi, the much loved First Guardian of the Faith . . . And also from the Hidden Words: “I loved thy creation, hence I created thee. Wherefore, do thou love Me, that I may name thy name and fill thy soul with the spirit of life.” “My first counsel is this: Possess a pure, a kindly and radiant heart . . .” “Of all things the best beloved in My sight is Justice . . .”

One of mother’s fondest hopes had been to see the Temple completed. For some years she had acted as hostess one day a week during the guiding season, and realized the tremendous teaching medium of the Temple. She was impatient for its completion. Father and Mr. Albert Windust, both of the first Spiritual Assembly of Chicago, had had the great privilege of writing the letter requesting ‘Abdu’l-Bahá’s permission to build the first Mashriqu’l-Adhkar in the Chicago area. Since that time fifty years or more had elapsed. Life for mother was drawing to a close. And now, in the spring of 1953, the Jubilee Celebration had started. People were coming from all over the world to attend.

What a happy evening it was when all the Persian Hands of the Cause and their families, who had come to attend the Jubilee, came to visit mother in her daughter’s home in Oak Park, at the request of her son, Leroy, who had also been appointed a Hand of the Cause by Shoghi Effendi and had taken residence, with his wife, Sylvia, at the Pilgrim House in Haifa. Her advanced years were bringing her many joys, for had not our beloved Guardian, Shoghi Effendi, honored Leroy by naming the ninth door of the shrine of the Báb, “Báb-i-Ioas”? Her cup was almost full, but still she had not seen the completion and dedication of the Temple. She remembered ‘Abdu’l-Bahá’s promise that people would enter the Faith in throngs when the Temple was completed, drawn at first through the great inspiring beauty of this noble edifice. Had He not said, “Some material things have a spiritual effect…”?

On May 1, 1953, the Bahá’í Dedication of the Temple was held. Our beloved Ruhiyyih Khanum, representing the Guardian, Shoghi Effendi, had come all the way from the World Center of the Faith at Haifa in honor of this Dedication of the Mother Temple of the West and the observance of the Centenary of the Declaration of Baha’u’llah. Though very ill, mother was lifted in her wheel chair by loving hands up the eighteen steps encircling the base of the structure those steps in memory of the eighteen Letters of the Living then through the door and at last in the Auditorium of the completed Temple. What joy she felt can only be imagined. To this was added the great happiness of seeing the beautiful picture of Bahá’u’lláh brought to America for the first time, to be viewed by His loving followers, and of feeling the thoughtful kindness of Ruhiyyih Khanum who walked beside mother as she was wheeled to the door and bade her farewell.

At last it was accomplished! The great day for which mother had waited these many years! A day of joy, a day of fulfillment, with a brilliant promise for the future.

Mother slipped away on May 25, 1953, at the age of eighty-seven. Not really “away” -just over the line into the spiritual realm. She had seen the Faith advance from its feeble beginning in America, when the only Bahá’í  literature consisted of the Tablets received from ‘Abdu’l-Bahá which were lovingly and humbly read and reread, to its present flourishing condition, with translations of the original Teachings of the Báb and Bahá’u’lláh; talks, explanations and exhortations of ‘Abdu’l-Bahá; and books, letters and directives by our beloved Guardian, Shoghi Effendi; with the added writings of his wife, Ruhiyyih Khanum.

How wonderful it is that today the world is indeed awakening spiritually to the call of Bahá’u’lláh. How far flung are the banners of His Cause, enlisting the allegiance of people all over the world, on all continents and islands of the sea!

Mother often used to say to me, “I love the Bahá’í Faith so much, but how little I can do towards its promotion. All I can do is to let my little flame shine out as best it can.” Today her children are ardent Bahá’ís and at the present writing seven of her grandchildren have answered Shoghi Effendi’s call for pioneers. They are to be found in such distant places as the Dutch West Indies, the Ballearic Islands, Monte Carlo, Paris, and even on the home front in Nevada, Texas and Illinois!

And so has ended the “little flame” of a loving mother and devoted Bahá’í, or has it, in truth, really ended? Even though the visible flame has disappeared, will not its  effects go on and on into eternity?

Editor’s Note:
Viola Tuttle, daughter passed away on July 29, 1993 at the age of 101. She is buried in Monterey, California.