Joseph Hannen was a leading Washington Bahá’í and active teacher of the Faith who became a Bahá’í shortly after his wife, Pauline. They taught the Faith to African Americans in the United States. Among those they taught was Louis Gregory and Mrs. Pocahontas Pope. In 1916 ‘Abdu’l-Bahá sent the first Tablet of the Divine Plan to the southern states in care of Joseph. He was named a Disciple of  ‘Abdu’l-Bahá by Shoghi Effendi. 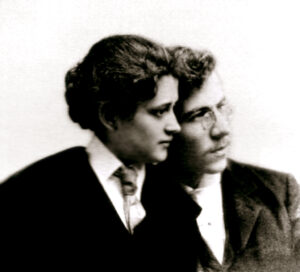 Joseph Hannen was a leading Washington Bahá’í and active teacher of the Faith who became a Bahá’í shortly after his wife, Pauline. They taught the Faith to African Americans in the United States. Among those they taught was Louis Gregory and Mrs. Pocahontas Pope. In 1916 ‘Abdu’l-Bahá sent the first Tablet of the Divine Plan to the southern states in care of Joseph. He was named a Disciple of  ‘Abdu’l-Bahá by Shoghi Effendi.[1]

Pauline grew up in Wilmington, North Carolina and over the years had a fear of blacks. The following story is recounted by Christopher Buck in his book titled, Alain Locke: Faith and Philosophy:

One snowy day, during the Thanksgiving season, Pauline came across a black woman trudging through the snow. Pauline noticed that the woman’s shoelaces were untied. Arms full from the bundles she was carrying, the woman was unable to do anything about it. Inspired by the passage from The Hidden Words, Pauline knelt down in the snow to tie this woman’s shoes for her. “She was astonished,” Pauline recalled, “and those who saw it appeared to think I was crazy.” That event marked a turning point for Pauline; she resolved to bring the Bahá’í message of unity to black people.[2]

It wasn’t until Pauline read one of the excerpts from Bahá’u’lláh’s, The Hidden Words that she overcame her fear of blacks.

Know ye not why We created you all from the same dust? That no one should exalt himself over the other. Ponder at all times in your hearts how ye were created. Since We have created you all from one same substance it is incumbent on you to be even as one soul, to walk with the same feet, eat with the same mouth and dwell in the same land, that from your inmost being, by your deeds and actions, the signs of oneness and the essence of detachment may be made manifest. Such is My counsel to you, O concourse of light! Heed ye this counsel that ye may obtain the fruit of holiness from the tree of wondrous glory.

Pauline with courage and conviction took the Faith to her devoted Lutheran family and husband. She and her husband and family served the Cause all through their lives. The continuing progress of her teaching won her ‘Abdu’l-Baha’s favor, He wrote her again in 1908 shortly before she went on Pilgrimage. They went on pilgrimage to the Holy Land in 1909. Not only did she bring the Knoblochs (her 2 sisters and mother) and Joseph (her husband) into the faith but her relatives the Barnitz family of Washington D.C. as well.[3]

‘Abdu’l-Bahá wrote to Pauline and Joseph:

“O ye two heralds of the Divine Kingdom! Verily ye have consecrated your time and your lives to the service of the Kingdom. Day and night, your highest wish is confined to the guidance of people and praise be to God, ye are confirmed and assisted in the promulgation of Divine Teachings. This supreme favor is pregnant with momentous results and this seed which ye have sown in the garden of Reality shall yield an exuberant result. Every seed shall yield a teeming harvest and every bough shall turn into a thriving, fruitful tree.” 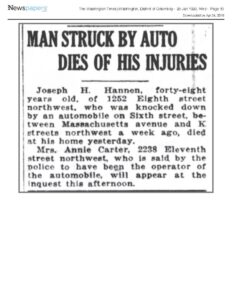 The death of Joseph H. Hannen, Disciple of ‘Abdu’l-Bahá a week after he was knocked down by a car in Washington, DC. It was Joseph Hannen who served as a note-taker for many of the talks of ‘Abdu’l-Bahá during His tour in the United States. A number of the entries in Promulgation of Universal Peace are accredited to him.[4]