Frédéric Hodonou was the first Bahá’í of Benin, West Africa. When he heard that the Bahá’í Faith was sent to humanity without any discrimination, he was immediately intrigued to investigate it. 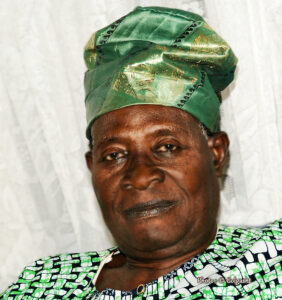 Frédéric Hodonou was the first Bahá’í of Benin, West Africa. He learned about the Faith through his love for painting. Madame Geneviève Lai, a French artist and her Vietnamese husband, an employee of the Port Authorities, were residents in Cotonou, the capital city, in the late fifties. The young Africans who were interested in the art of painting used to gather around Madame Lai to learn from her. Frédéric who was a proficient painter then, was introduced to Madame Lai and their discussions about art, painting and various techniques went on for several weeks. Mr. and Mrs. Lai were both followers of the Faith and the conversation eventually was led to the Bahá’í Faith.

Frédéric who was instinctively following the cult of his ancestors was converted to Catholicism. This conversion became more of a reason for him to investigate other faiths rather than practicing Christianity. When he heard that the Bahá’í Faith was sent to humanity without any discrimination, he was immediately intrigued to investigate it. He was brought up in a society where people worshipped the spirit of their ancestors and witchcraft was a part of daily life. The notion of adoration of God through the spiritual senses was new to him. He was concerned about the end of the world when many new religions will appear and therefore one would have great difficulty to find the true One. He was also wondering about the signs given in the Holy Books such as the stars falling from the heavens. He was sure that the end of time has not come and the signs have not appeared! When he read the explanation given by the Blessed Beauty in the Book of Certitude, his doubts were removed and he was transformed to a joyful being. He continued his deepening in the Faith with the Lai family and within six months (January 1960) he accepted the Faith.

He was deeply moved when he realized that the only condition to accept the Faith was to recognize Bahá’u’lláh as the Messenger of God for today and that there was no baptism in this Faith! The believer only has to enter into a Covenant with God when they declare their Faith and it is their responsibility to follow the laws and principles. Frédéric soon learned from Mr. Lai that the first responsibility of a believer is to teach the Faith the same way they taught him. He understood this message very quickly as a result as soon as he finished his daily job, he went around his neighborhood to teach the Faith. The number of new believers grew rapidly to nine and by Ridván, April 20, 1960 – the first Spiritual Assembly of the Bahá’ís of Cotonou was elected.

The teaching work did not stop there. Frédéric and the friends from Cotonou continued their enthusiastic labour and by 1969 communities were established in Parakou and Porto-Novo. Many villages in the north of Benin enrolled under the banner of the Faith. The first Socio-Economic program started in the village of Yokon near Abomey. Rural schools were established in villages under supervision of the Bahá’í Community. The government officially recognized the Bahá’í Faith. The National Spiritual Assembly of Benin, Togo and Niger were elected in 1973 with its head-quarter in Cotonou. A National Bahá’í Center was built in Cotonou and a Training Institute in Avrankou.

In those days, the Benin government changed once every two years due to tribal

rivalry! Eventually, a Revolutionary Government was established in 1975 and all organizations including the Bahá’í Community went through government scrutiny.  The Central Revolutionary Committee invited the members of the National Spiritual Assembly for an interview. Frédéric was also invited to the meeting. The interview took over two hours in presence of the Head of the State. The President then stated that the Bahá’í Faith seems to be a spiritual revolution and its principles should be taught everywhere in the country, its teachings are clear and simple to understand.

Frédéric was married twice and had nine children. They are all active believers in the community. The reason being as he stated was that he took them to children classes every Sunday.

As far as his travel-teachings were concerned; he had travelled extensively through West African countries, Europe and seven Russian Republics. In Asia, he visited Indonesia and his longest trip was in New Caledonia. Kanak, one of the indigenous tribes in the area, invited him to visit them. They requested the International Teaching Centre to send them an African Travel-Teacher. As soon as he retired from his regular job in January 1988, he sent a request to go for pilgrimage to Haifa. He received his reply two years later. The date of his departure for pilgrimage coincided with his assignment to go to New Caledonia! The Universal House of Justice graciously accepted that he might spend six days of his pilgrimage on his way to New Caledonia and the remaining days on his return. He left Cotonou on February 18, 1988 and after his short pilgrimage, he joined the Kanak tribe where he spent three months. In his first meeting, forty-five people who had joined the Faith later met him in Haifa and showered him with their love and acknowledging that he was their teacher.  Some of those new believers today are serving as Auxiliary Board Members in their respective communities.

I had the great privilege of travel teaching with Frédéric Hodonou for several years in various villages in Benin. He was a true magnet to draw people to the Faith through his love for Bahá’u’lláh and his crystal clear explanations of the verities of the Faith. For many years, he had set a goal for himself to translate the Writings into local languages. He succeeded and translated the Bahá’í prayers, several introductory books as well as Ruhi Books into Fon, which is a major language of Benin.

The following letter was sent to the National Spiritual Assembly of the Bahá’ís of Benin on behalf of the Universal House of Justice:

It is with great sadness that the Universal House of justice, through your e-mail dated January 11, 2016, learned of the passing of Frédéric Hodonou, a faithful servant of the Blessed Beauty. May the memories of dedicated services he has rendered to the Cause of God, especially as a member of Auxiliary Board, and as a teacher of the Faith – in particular, his enthusiastic contributions to the dissemination of Divine Fragrances in New Caledonia and the Loyalty Islands – be an inexhaustible source of inspiration for all those who knew him.

Please convey to his family and loved ones the affectionate condolences of the House of justice for the loss they have suffered and assure them of their ardent prayers at the Sacred Threshold for the progress of his radiant soul in the Abhá Kingdom.

Prayers are also offered for solace and consolation of his family in this time of mourning.

With our affectionate Bahá’í Greetings,

Department of the secretariat

A video tribute was produced for the NSA of Benin to celebrate the life of this remarkable servant of the Cause by Golgasht Mossafá’í. It can be viewed here in French.