Life changed again when George died after falling from his horse, making Fred the last of his people. Fred, even though he was used to station life, didn’t want to spend his whole life as a station hand and became restless, so he moved on.

Fred, remembered respectfully as ‘Uncle Fred,’ came across the Bahá’í Faith through Bahá’ís from Renmark including Howard Harwood and his wife Myrtle. At the time (1955) Fred was an old and respected Aboriginal man of the Mirning people with a strong memory, but unable to read or write. [1]

His wife and many of his children had died, partly due to conditions on the mission. He had retired from dried fruits and paddle steamer work and was living on an Aboriginal settlement called Gerard.[2]

It had begun a ‘model mission’ but became a very difficult place to live and Fred was soon, at his own request, living on Howard Harwood and his wife’s farm, but only after they were able to secure legal permission for him to leave the Mission – this was just one of the many laws at the time in Australia that made life difficult for Australia’s Indigenous people.

Howard and Fred were to become firm spiritual brothers, but it was at a large meeting with many other Indigenous people, held at the home of the Williams in June 23, 1961, that he declared his faith. [3]

Whilst it is certain that Fred was the first of the Mirning people to become a Bahá’í, there are several other Indigenous people of Australia, from other language groups, who became Bahá’í at a similar or early time, such as Harry Carter, the Kropinyeris (who were related to David Unaipon the great Aboriginal inventor and author) and a youthful Elizabeth Hindson who would later go on to serve on the National Spiritual Assembly of the Bahá’ís of Australia. Many of them were his friends. Fred and Harry later travelled with Dr. Muhajir. [4] 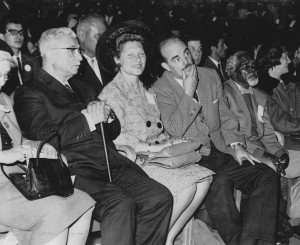 Uncle Fred’s significance to Bahá’í and Australian history is that he wanted to use the power of his own published story to bring unity. To that end, Howard and Fred collaborated to produce a pamphlet telling Uncle Fred’s life in his own words. They hoped this would encourage Aboriginal and non-Aboriginal people of Australia to unite and overcome any differences they felt they had through understanding each other better.[5]

In the pamphlet Fred shared how his parent’s passed away from measles when he and his brother George were about one and two years old. This led to them being taken by the station manager’s wife to raise (common practice at the time for Indigenous infants). Despite her kindness to the boys this life was harsh for Fred and George as they were regularly beaten by the other station workers and she could do little to stop this.

Worse was to come when the Mirning people’s waterhole was deliberately poisoned, killing all but Fred and George, who were living at the station. Even though people knew who had done it, no justice was ever done. Fred and George could stand it no longer, so at only ten and twelve years old, they ran away. After a long journey and a year living off the land, they found a station where the people were kind and fair.[6]

Fred did not dwell on this tough beginning to his life, but placed his whole experience into a tapestry of crisis and victory. Alongside the tragedy there were moments of joy, like working on the land under the stars with George.  The new station was so welcoming that they adopted the surname of the family who ran it, Murray. Fred spent most of his life learning Indigenous lore and stories through connecting to local elders from other Aboriginal language groups.

Life changed again when George died after falling from his horse, making Fred the last of his people. Fred, even though he was used to station life, didn’t want to spend his whole life as a station hand and became restless, so he moved on.[7]

He continued to gather into his memory spiritual stories from the Elders as he travelled on the paddle steamers up and down the Murray River.  Eventually he was married to Winnie Reed through Professor Norman Tindale and they had ten children, seven of whom died very young. [8]

Fred respected the land and the dreamtime, called by them, Tjukurpa, as well as the Christian teachings of the station family that he had adopted and truly loved him and his brother – this kind family were related to Howard Harwood. [9]

Fred met the Hand of the Cause Rúhíyyih Khánum, wife of the Guardian Shoghi Effendi, when she stopped in at Murray Bridge on her way to Sydney for the opening of the Bahá’í Temple. Fred also attended that opening.  Later she sponsored his trip to London for the first World Congress of Baha’is.

‘I have come like a giant kangaroo across the world to stand at this stage and tell world how happy I am to be a Baha’i.[11]

June Perkins tells stories through poetry, photography, storytelling, blogging, interviews, written words, and video. She’s been published in several anthologies for Pacific, and Australian writers and is currently writing chapter and picture books inspired by Baha’i principles and virtues. You can visit her at her website http://juneperk.wix.com/gumbootspearlz and blog http://gumbootspearlz.org