Aqa Mirza Ali Muhammad came face to face with the Supreme Manifestation of God. These meetings left an abiding impression upon his soul and magnetized his whole being with the love of his newly-found Lord. 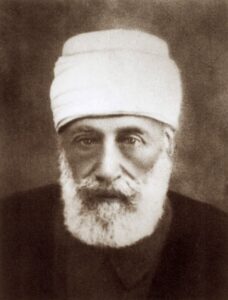 Mirza ‘Ali-Muhammad was a son of one of the most illustrious of the believers, Mulla Sadiq-i-Khurasani, who was entitled by Bahá’u’lláh Ismu’llah’u’l-Asdaq (The name of God, the most truthful). He was one of the four Hands of the Cause selected by Bahá’u’lláh.

As he grew up it became clear that this son had inherited many of the outstanding qualities and virtues of his father. He became known among the believers as Ibn-i-Asdaq (The son of Asdaq). He had the great honour as a young boy of accompanying his father to Baghdad, where they both attained the presence of Bahá’u’lláh. In several interviews this youth came face to face with the Supreme Manifestation of God. These meetings left an abiding impression upon his soul and magnetized his whole being with the love of his newly-found Lord. While they were in Baghdad Bahá’u’lláh revealed a prayer in which He supplicates God to feed the young boy with the milk of His bounty so that he may be enabled to raise the standards of victory in His Name and arise to serve His Cause when he is older. In this prayer Bahá’u’lláh describes him as one who in his tender years had travelled a long distance seeking to meet his Lord, and this he had achieved when he attained His presence. [1] [For a brief account of his noble life see vol. 3, p. 253-8.]

Towards the end of His life He revealed a Tablet to each one of these souls, designating them as ‘Hands of the Cause of God’. As far as we can gather, the first time He used the term ‘Hand of the Cause’ to refer to an individual with certain responsibilities was in a Tablet revealed in honour of Ibn-i-Asdaq on April 13, 1887. Perhaps all three Hands of the Cause were appointed around the same time.