In addition to his literary output the achievements of Ahmad Yazdání include his invaluable work over the years on the National Spiritual Assembly and the Local Spiritual Assembly of Tehran; his contribution to the education and progress of women; his review of Bahá’í publications, and his prodigious labors in collating and classifying extracts from the many tablets of Bahá’u’lláh and ‘Abdu’l-Bahá and the letters of the Guardian. 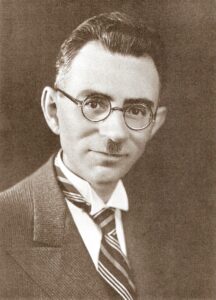 In response to the outbreak of the First World War, an international group of peace activists in The Netherlands, exploring the paths to prevent future wars, constituted themselves into a body known as the Central Organization for a Durable Peace, with its secretariat based in The Hague. In the spring of 1915 their Manifesto & Program was published by the press the world over.

In Tehran, the young Bahá’í Ahmad Yazdání, in consultation with two other Bahá’ís, prepared in French a paper embodying the Bahá’í principles and sent it to that organization with the suggestion that they search for ways to a permanent and universal peace would be facilitated if they sought guidance on the subject from ‘Abdu’l-Bahá. The organization responded by submitting through Ahmad Yazdání a letter to ‘Abdu’l-Bahá. This letter, however, did not reach Haifa until the war was over.

In December 1919 the Master summoned the Hand-of-the-Cause ‘Alí-Muhammad Ibn-i-Asdaq and Ahmad Yazdání to the Holy Land and delegated them to take His answer, the Tablet of Peace (Lawh-i-Sulh) with its English translation, to the secretariat of the peace organization in The Hague.

Taking a Dutch steamer from Port Said, the two envoys arrived in Rotterdam, the Netherlands, on May 22. A few days later they met with the chairman, vice-chairman and secretary of the Executive Committee of the Central Organization and handed them ‘Abdu’l-Bahá’s tablet.

After receiving the written answer of the Executive Committee ‘Abdu’l-Bahá sent them a second shorter tablet in which He stressed the importance of religion in achieving universal peace. In early August Ahmad Yazdání also delivered this second Tablet to The Hague.

During his eleven week stay in The Netherlands, Ahmad Yazdání established contact with the Esperantists as he knew that language well and was a member of their branch in Tehran. He attended their meetings in various cities and towns and gave many stirring talks on the Faith.

Upon his return to Persia Ahmad Yazdání was invited by the National Spiritual Assembly to edit the Bahá’í News of Iran. He served as its editor-in-chief for twelve years and wrote an article regularly in every issue on the aims, objectives and principles of the Cause. He was associated with most Bahá’í publications in Iran and was one of the founders of, and a contributor to the Bahá’í  Women’s Journal.

In addition to his literary output the achievements of Ahmad Yazdání include his invaluable work over the years on the National Spiritual Assembly and the Local Spiritual Assembly of Tehran; his contribution to the education and progress of women; his review of Bahá’í publications, and his prodigious labors in collating and classifying extracts from the many tablets of Bahá’u’lláh and ‘Abdu’l-Bahá and the letters of the Guardian.

Upon his retirement from government service in 1949 Ahmad Yazdání travelled for the Faith over a wide area of the Middle East. At the request of the Guardian he visited India, Pakistan, Kuwait, Bahrain, Qatar, Dubai, Iraq, Saudi Arabia, Turkey and Afghanistan.

For Dutch Bahá’ís the name ‘Ahmad Yasdání’ is above all connected to the person who delivered ‘Abdu’l-Bahá’s Tablet to the Central Organization for a Durable Peace in The Hague, and who was the first Persian to teach the Bahá’í Faith in the Netherlands. One of his Dutch friends later wrote: ‘In the year 1920 two Persians visited our country to speak on Baha’ism. One of them was Ahmad Yazdání and he spoke Esperanto fluently. The other was very old and only spoke Persian. For three months I escorted them and translated the speeches of Ahmad Yazdání. After the Second World War he wrote me again. He is a very sympathetic and noble person.’

In December 2019, at the 100th anniversary of ‘Abdu’l-Bahá’s Tablet of Peace, a Dutch website on the history of the Bahá’í community will launch a special English language photo chronology on its delivery by Ahmad Yazdání which can be seen here.

3 – De Vries, Jelle & Adib. “The Journey of ‘Abdu’l-Baha’s Tablet to the Hague” bahaigeschiedenis.nl

Adib de Vries is a 4th generation Bahá’í in The Netherlands. Adib and his father made a Dutch language website on the history of the Bahá’í community to commemorate the 200th anniversary of Bahá’u’lláh; the website is: bahaigeschiedenis.nl. Together they did research on the delivery of ‘Abdu’l-Bahá's Tablet of Peace to The Hague.