Mr. Fayard Nicholas was a Baha'i and he developed the duo’s trademark balletic and acrobatic style, which they showcased in 65 movies, and which inspired such greats as Fred Astaire, Gene Kelly and Michael Jackson, to whom they taught tap. 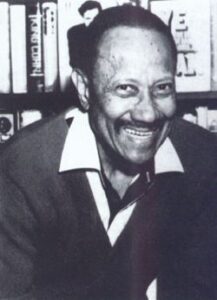 Fayard Nicholas was an American choreographer and came up with his ballet and acrobat style which was showcased in 65 movies.

Fayard and his brother Harold were raised in a very musical household in Philadelphia. He began watching his parents’ band from the front row of the theater at the age of three. By the time he was five, he had seen most of the great vaudeville acts on the circuit. [1]

Fayard then began teaching his younger brother, Harold. The “Nicholas Kids” were immediately successful, and began 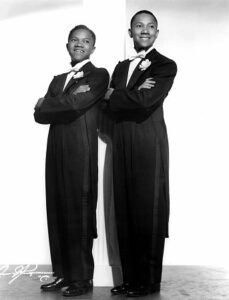 performing in vaudeville. In 1932, they opened at the Cotton Club, headlining with great orchestras like Duke Ellington and Cab Calloway. In 1934, they went to Hollywood to appear in the film “Kid Millions,” with Eddie Cantor. This marked the beginning of their film career that spanned fifty-five films in America, in which they performed as actors, singers, dancers and musicians. They also made featured films in England, Spain, Germany, France, Mexico and Italy. [1]

Nicholas, who retired to the Woodland Hills facility in 1984 emphasized the good folks and good times in his long career, pausing once or twice to praise his Baha’i faith. But he is also a clear-eyed witness to the minority experience in an industry that often promulgated stinging racial stereotypes and withheld stardom from many minority performers with extraordinary gifts. [2]

Fayard became a Bahá´í in 1967 and was a spiritual father of many Bahá´í’s. Some of the charity events Fayard supported included the following: The Danny Thomas St. Jude Hospital, the Jerry Lewis Telethon, the Arthritis Foundation Telethon, the Negro College Fund, the Variety Club Telethon for Children, Drug Abuse, and Special Concern with Plight for the Homeless. Fayard also raises funds for the construction of the Los Angeles Dance Gallery and for the Motion Picture and Television Village in Woodland Hills, California, where he and his wife Barbara lived. [1]

In 1986, Fayard and his wife Barbara celebrated their 19th wedding anniversary in a special Baha’i wedding ceremony at the Motion Picture and Television Country House in Woodland Hills, California. [3] The photo depicts his two sons Paul and Tony from his first wife, Geraldine.

The Nicholas Brothers have been recipients of many awards throughout the years, including The National Academy of Television Arts & Sciences Emmy, 1965-1966, The ELLIE award from The National Film Society, 1984, The City of Hope Award, 1986, The Josephine Baker Award, 1986, The Ebony Life Achievement Award, 1987, the Tony Award, 1989, and a City of Los Angeles Resolution (from Mayor Tom Bradley) in 1991. [1] 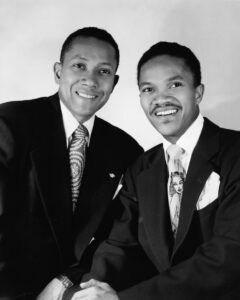 choreographer for the on-Broadway musical revue “Black and Blue.” Christmas 1990 was a first for Fayard to star in a ballet, “The Nutcracker,” with the San Diego Ballet Company. On January 10, 1991, Fayard was commissioned by the Japan Satelllite Broadcasting Company to make a documentary film for the American Cinema Awards, to be shown only in Japan, and to benefit the Motion Picture and Television Fund. [1]

Fayard and his brother, Harold, were honored in Washington, D.C., at the Kennedy Center Honors with President andMrs. Bush in 1991. In 1992 and 1993, a documentary of “The Nicholas Brothers” was on A&E Cable Telev ision, called “We Sing and We Dance.” It won the Cable Ace Award on January 14, 1994. Also in 1994, the Nicholas Brothers were honored with a Star on the Hollywood Walk of Fame. The Professional Dancers Society honored the Nicholas Brothers, along with Ginger Rogers on February 27, 1994. [1] 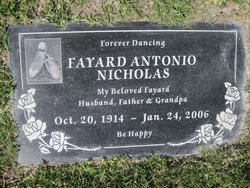 Fayard conducted several interviews prior to his death in 2006 and there is a large collection available online.

We updated the interview to reflect his passing but his full interview can be accessed in the link below. Harold Nicholas died on July 3, 2000 in New York City and Fayard died of Pneumonia.