Dr. Darius Shahrokh was a retired physician-surgeon. He was a member of Rochester's first Local Spiritual Assembly in April 1960. He recorded deepening talks. He was well known for his five-year project to record the 'Windows to the Past' tapes. 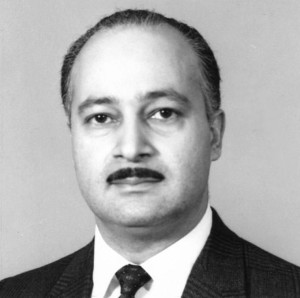 Dr. Darius Shahrokh was born in 1931 and educated in Tehran, Iran. In 1956  Shahrokh came to the United States to become an ear, nose and throat specialist at the Mayo Clinic in Rochester, Minnesota.

On April 21, 1960 the first Spiritual Assembly was formed in Rochester and Shahrokh was a member. In that same year at the request of an isolated, recently enrolled Bahá’í family in Marshfield, Wisconsin, Darius, Grace and their infant daughter moved. He helped build the Marshfield Bahá’í community through his historical deepenings and teaching activities.

His mother, Katayoon, whose pioneer services covered several decades, introduced Persian cooking to the central Wisconsin town on her visits.

Later the family moved to Fond du Lac, Wisconsin. He helped form the first Spiritual Assembly there and served on it for 24 years. He was also instrumental in the 1980 launch of Wisconsin’s summer Bahá’í school.

He loved the history of the Faith. The popularity of historical deepenings he offered in California in the early 1990s led to production of the 25-tape audio deepening series Windows to the Past, which has been distributed internationally and broadcast on Internet-based radioNUR.

In 1992, Dr. Darius Shahrokh, a retired physician-surgeon, recorded some deepening talks upon the insistence of friends in his Bahá’í Community. These were first intended for local use. Then it became apparent that Bahá’í deepening and stories on audiotape met the needs of people in various circumstances, such as those with vision or reading problems, audio learners, isolated Bahá’ís, those with long commutes who want to listen to talks while driving, immigrants who find reading English difficult but are comfortable with spoken English. Also the tapes are useful for new Bahá’ís and Bahá’í youth who want to become rapidly well-informed about the Faith without having to purchase a lot of books.

In view of these needs, Dr. Shahrokh expanded the extent of material, which at this time has been obtained by approximately twenty-five National Spiritual Assemblies for aiding their teaching and deepening programs, with plans to translate into various languages.

Each program is the result of months of study of resources in both English and Persian. Most cassettes include a map, photos, and/or list of references. Dr. Shahrokh and his wife, Grace, who assisted with research and editing, have done their best to make the information as accurate as possible.

Some reference is made to Windows to the Past as stories, but it should be remembered that the stories are not intended to be entertainment, but to inform, elucidate, and inspire the listener. The essay tapes have relevant stories purposefully placed to lighten the concentration or emphasize a point.

Windows to the Past has been praised by listeners who state that the series is packed with information and inspiration and presented in a style that holds attention.

On retirement, the couple moved near Sacramento, California. Darius served at various times on two suburban Spiritual Assemblies and the District Teaching Committee. He helped organize regular children’s classes that continue to this day.

His lively retelling of historical events led to a popular series of deepenings in the Sacramento area. With encouragement and recording equipment supplied by friends, he embarked on the five-year project to record the Windows to the Past tapes.

Later, Darius relocated to Cedar Park, Texas, and Buncombe County, also serving on their Assemblies. He spoke at events and Bahá’í schools in Wisconsin, California, Oregon and Texas and also made teaching trips to Caribbean islands and to some Southern states.

He is survived by his wife of 45 years, Grace; daughters, Roya and Lorraine Nura; son Ross; four grandchildren, one brother and three sisters.

TagsBaha'i Dr. Darius K. Shahrokh Windows to the Past
FacebookTwitterPinterestLinkedIn