August had begun for the visits of travelling teachers and the settling of pioneers in Stockholm and Gothenburg with the aim of establishing Local Spiritual Assemblies in those centres as quickly as possible. August Rudd was privileged to plant the banner of the Faith of Bahá'u'lláh in Sweden and to lay the foundation for its development and expansion in that country. 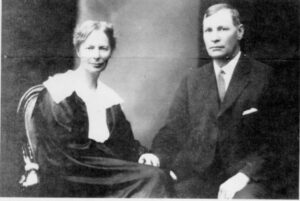 August Rudd was privileged to plant the banner of the Faith of Bahá’u’lláh in Sweden and to lay the foundation for its development and expansion in that country. His parents had many children and the family lived with meagre economic resources. Around 1890 August moved to the Norwegian side of the border to live with two of his brothers, Edvin and Otto, who were inventors and who achieved some recognition for their designs for a boat engine and typewriter.

In 1893 the three brothers emigrated to the United States. They settled first in Kenosha, Wisconsin, and later in Chicago, Illinois, where they received the Bahá’í message. August wrote to ‘Abdu’l-Bahá in the autumn of 1919 expressing his wish to return to Sweden and not long thereafter received the following Tablet from the Master:

‘O Thou son of the Kingdom!

‘Thy letter was received. Thy desire is to return to Sweden, thy home. In the country of Sweden the call of God is not yet raised. God willing, thou mayst be confirmed to raise the divine call in that country and be the cause of guidance unto a large multitude. Let not this statement look strange to thee, because the confirmations of the Kingdom of Abha are powerful. They make the feeble strong, and give feathers and wings to the featherless bird.

‘The maid-servant of God, Miss Knobloch,’ went from America to Germany. Of course thou hast heard how she stirred Germany and consequently how many souls were guided! Now I supplicate to God that thou mayest be more (than she) confirmed, so that that dark country of the world of nature may be illumined with the heavenly luminosity. Feel assured that confirmation will reach thee . . .”

In spite of physical weakness as a result of illness, August sailed from New York on June 25, 1920 and arrived in Sweden the following month. He settled in Boda, Varmland, where he became, according to all available information, the first Baha’i pioneer in Sweden. Records show that there had been periodic and temporary Bahá’í visitors to Sweden from as early as 1908, but now the country had a resident believer. The following year, 1921, Edvard Olsson also came to Sweden from the United States as a pioneer and settled only a few miles north of Boda. The men had known one another in the United States and they kept in contact with each other until August Rudd’s death.

Not long after his arrival at his post, August wrote to his fellow believers in the United States through the editors of Star of the West:

“Friends of the Kingdom of El-Abha!
Your humble co-servant in the great Cause of God arrived in Sweden the 8th of July. Went to the most remote corner of the country to begin spreading the great Truth, and there I found a pure-hearted soul, who in three weeks accepted the Truth. Highly educated in both Swedish and English, she began to work with me in the Cause. Naturally, progress is very slow, but hope by the grace of God and our beloved  Master, will soon grow faster . . .”

The ‘pure-hearted soul’ to whom he alluded was Miss Anna Gustavsson, a teacher at Bovikens school, to whom August turned for assistance in translating Bahá’ípamphlets into Swedish and to help him improve and refine his knowledge of the language. Within a short time of her acceptance of the Faith they were married. The couple became widely known in their surroundings, due in part to their purchase of both a motorboat and an automobile which they used for teaching trips in both Sweden and Norway. They also established good relations with the newspapers and had published many the Bahá’íFaith and its progress in the world.

In 1923 the Rudds were paid a visit by Mrs. Louise Ericksson from the United States who presented them with a copy of Dr. John E. Esslemont’s Bahá’u’lláhand the New Era, the first edition of which had just been published under the imprint of George Allen & Unwin Ltd., London. As soon as he took the book in his hands, August exclaimed, ‘Anna, we shall translate this book!’ This they did, and the Swedish translation was published in 1932.

The activities of the Rudds in Sweden and Norway were reported in Star of the West, vol. 17, no. 1, April 1926: ‘These teachers, together with Mrs. Louise Erickson of Brooklyn, N.Y., who has spent much time in Sweden, and who even while in this country constantly assists the work of the Bahá’í Cause in her native land across the sea, have given of their time, effort and all of their resources in ardent devotion to ‘Abdu’l-Bahá and the divine plan of teaching which He gave to the world. They have not only lived and worked in the large centers of population, but during summer vacations always go by automobile for long teaching tours through the country.

The people of these far northern climes are always much attracted to the Bahá’í teachings for world unity, and when they are awakened, they become very strong adherents of the Faith. They say with one accord, “The Teachings and Principles of the Bahá’í Cause are so high and noble, so pure and holy, that we cannot do anything else but work and spread them, and you can count on us as co-workers . . .”

Anna continued her intensive teaching and translating work after August died. She published several pamphlets and in 1936, under the direction of Shoghi Effendi, she published the Swedish translation of a second book, the Kitáb-i-Íqán. Anna also furthered the planning which she and August had begun for the visits of travelling teachers and the settling of pioneers in Stockholm and Gothenburg with the aim of establishing Local Spiritual Assemblies in those centres as quickly as possible. Sadly, she did not live to experience the fulfilment of these goals as she passed away on August 27, 1943 and the first Local Spiritual Assembly in Sweden (Stockholm) did not come into being until April 1947.

August and Anna Rudd are forever inseparably associated with the establishment and early development of the Bahá’í Faith in Sweden. In one of his letters to them the Guardian said, in effect, that the reports of their activities which they sent to him testified eloquently and powerfully to the dynamic all- conquering spirit of Bahá’u’lláh working so astonishingly through them. It is for present and future generations of Bahá’ís in Sweden and Norway to repay their debt of gratitude to these early servants of the Bahá’íCause in those lands by the brilliance of their exploits in its service and their willingness to become increasingly effective channels of that spirit through which all obstacles are vanquished. 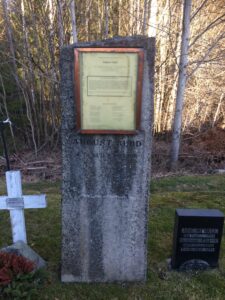 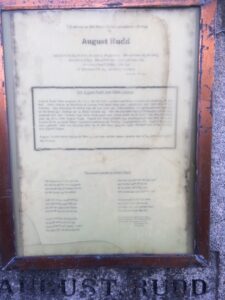 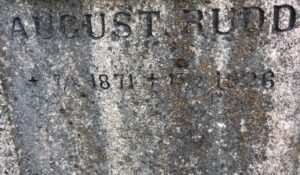 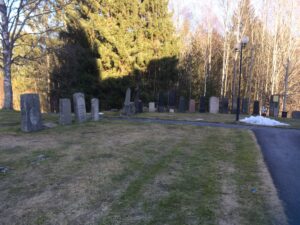 Editor’s note:
We were contacted by Ms. Vigdis Angell who informed us that sadly Mr. Rudd’s grave no longer exists, but the tombstone stands there as a part of an exhibition of unusual tombstones.