They needed no teacher, then; by themselves, they saw through the veils that had blinded them before, and won the supreme desire of their hearts. 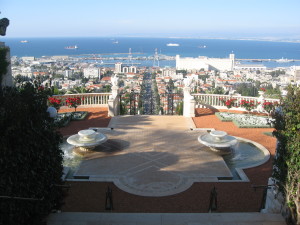 And among those who emigrated and came to settle in the Holy Land was Áqá Ibráhím, one of four honored brothers: Muḥammad-Ṣádiq; Muḥammad-Ibráhím; Áqá Ḥabíbu’lláh; and Muḥammad-‘Alí. These four lived in Baghdad with their paternal uncle, Áqá Muḥammad-Riḍá, known as ‘Aríḍ. They all lived in the same house, and remained together day and night. Bird-like, they shared the one nest; and they were always fresh and full of grace, like flowers in a bed.

When the Ancient Beauty arrived in Iraq their house was in the neighborhood of His, and thus they had the joy of watching Him as He came and went. Little by little the manner of that Lord of hearts, what He did and what He did not do, and the sight of His lovesome face, had its effect; they began to thirst after the Faith and to seek His grace and favor. They presented themselves at the door of His house, as if they were flowers blooming there; and they were soon enamored of the light that shone out from His brow, captives of the beauty of that dear Companion. They needed no teacher, then; by themselves, they saw through the veils that had blinded them before, and won the supreme desire of their hearts.

As commanded by the Blessed Beauty, Mírzá Javád of Turshíz went to their house one night. Mírzá Javád had hardly opened his mouth when they accepted the Faith. They did not hesitate for an instant, for they had amazing receptivity. This is what is meant by the Qur’ánic verse: “…whose oil would well nigh shine out, even though fire touched it not! It is light upon light.”  That is, this oil is so fully prepared, so ready to be lit, that it almost catches fire of itself, though no flame be at hand; which means that the capacity for faith, and the deserving it, can be so great, that without the communication of a single word the light shines forth. This is how it was with those pure-hearted men; truly they were loyal, staunch, and devoted to God.

The eldest brother, Muḥammad-Ṣádiq, accompanied Bahá’u’lláh from Iraq to Constantinople, and from there to Adrianople, where he lived happily for some time, close to his Lord. He was humble, long-suffering, thankful; there was always a smile on his lips; he was light of heart, and his soul was in love with Bahá’u’lláh. Later he was given leave to return to Iraq, for his family was there, and he remained in that city for a while, dreaming and remembering.

Then a great calamity occurred in Iraq, and all four brothers with their noble uncle were taken prisoner. Victimized, captive, they were brought to Mosul. The uncle, Áqá Muḥammad-Riḍá, was an old man, illumined of mind, spiritual of heart, a man detached from all worldly things. He had been extremely rich in Iraq, enjoying comforts and pleasures, but now in Hadbá—Mosul—he became the chief victim among the prisoners, and suffered dire need. He was destitute, but remained dignified, pa tient, content, and thankful. Keeping to himself in an out-of-the-way place, he praised God day and night until he died. He gave up his heart to his heart’s Love, burst from the shackles of this inconstant world and ascended to the Kingdom that endures forever. May God immerse him in the waters of forgiveness, make him to enter the garden of His compassion and good pleasure, and keep him in Paradise till the end of time.

As for Muḥammad-Ṣádiq, he too, in Mosul, was subjected to hardships on God’s path. He too was a soul at rest, well-pleased with his Lord and well-pleasing unto Him. In the end he too replied to the voice of the King of Glory: “Lord, here am I!” and came to fulfill the verses: “O thou soul who art well-assured, return unto thy Lord, well-pleased, and well-pleasing unto Him. Enter thou among My servants; enter Thou My Paradise.”

And Muḥammad-‘Alí, once he was freed from captivity, hastened from Mosul to the Holy Land, to the precincts of inexhaustible grace. Here he still lives. Although he suffers hardship, his heart is at peace. As for his brother Ibráhím, referred to above, he also came on from Mosul to ‘Akká, but to a region close by. There with patience, calm, contentment, but difficulty, he engaged in trade, meanwhile mourning the ascension of Bahá’u’lláh by day and night. Lowly and contrite, with his face turned toward the mysterious realms of God, he wore his life away. At the end, consumed by the years, hardly able to move about, he came to Haifa, where he found a corner of the travelers’ hospice to live in, and spent his time humbly calling upon God, entreating Him, offering praise. Little by little, eaten away with age, his person began its dissolution, and at the end he stripped off the garment of flesh and with his unclothed spirit took flight to the realm of the All-Merciful. He was transported out of this dark life into the shining air, and was plunged in a sea of lights. May God brighten his grave with spreading rays, and lull his spirit with the fannings of Divine compassion. Upon him be the mercy of God, and His good pleasure.

As for Áqá Ḥabíbu’lláh, he too was made a captive in Iraq and was banished away to Mosul. For a long time, he lived in that city, subjected to hardships, but remaining content, and his faith increasing day by day. When famine came to Mosul life was harder than ever on the outsiders, but in the remembrance of God their hearts were at rest, and their souls ate of food from Heaven. Thus they endured it all with astonishing patience, and the people wondered at those strangers in their midst who were neither distressed nor terrified as the others were, and who continued to offer praise day and night. “What amazing trust,” the people said, “they have in God!”

Ḥabíb was a man with a great store of patience and a joyous heart. He accustomed himself to exile and he lived in a state of yearning love. After the departure from Baghdad, the prisoners of Mosul were constantly made mention of by Bahá’u’lláh; with regard to them, He expressed His infinite favor. A few years afterward, Ḥabíb hastened away to the encompassing mercy of God, and found a nest and refuge on the boughs of the celestial Tree. There, in the Paradise of all delights, with wondrous songs he poured out his praise of the bountiful Lord.