He travelled to Cameroon with Enoch Olinga to teach the Baha'i Faith. 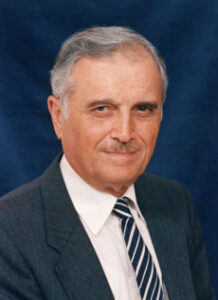 Ali Nakhjavani was born to Bahá’í parents named Ali-Akbar who died after Ali was only 2 years old. His mother Fatimih Khanum was advised by ‘Abdu’l-Bahá to move the family to Haifa where he was raised.

He received his Bachelor of Arts degree from the American University of Beirut in 1939. He then returned to Iran and became the member of the National Spiritual Assembly.[1]

In 1951 he moved his family to Uganda, Africa and worked as a teacher and lecturer.  He travelled to Cameroon with Enoch Olinga to teach the Bahá’í Faith and three years later he was an Auxiliary Board member and two years later (1956) he was elected to the Bahá’í National Spiritual Assembly of Central and East Africa.[2]

In 1961 he was elected as a member of the International Bahá’í Council and then was elected to the Universal House of Justice until he retired in 2003.

Nakhjavani has given hundreds of talks throughout the country and one that is very poignant during our teaching efforts can be heard below which is on the Institute Process Core Activities.

With sorrowing hearts we convey the news that in the early hours of this morning our deeply cherished, illumined, and illustrious former colleague ‘Alí Nakhjavání ascended to the worlds beyond.

Mr. Nakhjavani died in France at the age of 100 years old in France.

“We mourn the loss of an extraordinary figure who leaves behind a distinguished legacy of uninterrupted service to the Cause of God. In the course of a singularly remarkable life that began in the closing years of the Heroic Age and extended to the very fringes of the second century of the Formative Age, he shone in the firmament of selfless devotion to Bahá’u’lláh and was called upon to be involved in many a major development in the rise of the Administrative Order, whether as a member of the National Spiritual Assembly of Iran, as an intrepid pioneer to Africa in the Ten Year Crusade, as a member of the African Auxiliary Board when it was first created, as a member of the Regional National Spiritual Assembly of Central and East Africa at its inception, and as a member of the International Bahá’í Council when it was first elected, a prelude to his membership on the Universal House of Justice when it was established in 1963. He brought to his decades of monumental service absolute fidelity to his beloved Guardian, an exceptional depth of knowledge of the Cause, leonine commitment to the defence of the Covenant, intense ardour for the teaching work, rare spiritual acuity, and a radiant heart brimming with love for everyone who crossed his path. His was a life of profound spiritual attainment lived at the hinge of history. May his utter consecration, his adamantine faith, and his unswerving dedication to duty inspire generations to come.

We supplicate at the Sacred Threshold for the progress of his noble soul, that it may be richly rewarded, and that it may be united with his valiant pillar of support, his beloved wife Violette. Our condolences are extended to his dear daughter and son, Bahiyyih and Mehran, and to their families, and we pray that their grieving hearts may be solaced. The friends are called upon to hold memorial meetings in his honour, including befitting gatherings in all Houses of Worship throughout the world.” – The Universal House of Justice

He’s married to Violette Nakhjavani and they have two children Bahiyyih and Mehran.