Masud learned of the Baha’i Faith in 1992 as a student at Morehouse College in Atlanta. He was introduced the Faith from a then girlfriend who was not a Baha’i but an admirer. “This remarkable human being, gifted, intelligent, and beautiful, died of breast cancer shortly after introducing me to the Faith. She was twenty-four years-old.” 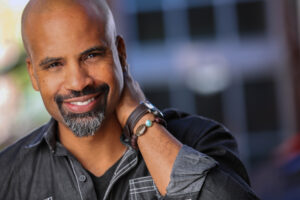 Masud Ashley Olufani is an Atlanta based actor and mixed media artist whose studio practice is rooted in the discipline of sculpture.

Masud learned of the Baha’i Faith in 1992 as a student at Morehouse College in Atlanta. He was introduced the Faith from a then girlfriend who was not a Baha’i but an admirer. According to Masud, “This remarkable human being, gifted, intelligent, and beautiful, died of breast cancer shortly after introducing me to the Faith. She was twenty-four years-old.”

Masud has four siblings, two older half brothers; one younger half brother; and one younger half sister.  He was raised primarily in New York and Florida.  He is the first Baha’i in his family.  His mother embraced the Faith several years after he did. When asked about his family background Masud said, “I am a proud descendant of enslaved persons on both sides of my family.  My maternal ancestors cut sugar cane on the island of St. Croix, and harvested cotton on plantations in Georgia.  My Paternal ancestors picked cotton in central Texas near Dallas.  The resiliency of these extraordinary human beings–their determination to make a way out of no way–continues to inspire me.”

He has had many role models and influences such as the Baha’i poet Robert Hayden who is an ongoing source of inspiration for Masud. He adds, “He was a writer of profound spiritual insight and an adroit master of his craft.”  Martin Luther King Jr., Fannie Lou Hamer; Malcolm X; Augusta Savage; Paul Robeson; Elizabeth Catlett; Zora Neal Hurston; and others, continue to be sources of ancestral encouragement.

He is a graduate of Arts High School in Newark, New Jersey, Morehouse College and The Savannah College of Art and Design where he earned an M.F.A. in sculpture in 2013. We asked Masud what has been the most difficult piece of art to create and why? And he said, “that all works of art come with their own set of challenges.  The most ambitious work of art to date is, without question, Blocked: A Global Healing Project, which deals with the residue of trauma associated with global sites directly linked to the trans-Atlantic slave trade.  For this project I will travel throughout the United States; South America; the Caribbean; West and South eastern Africa, and Europe.” His work can be seen here.

Masud has exhibited his work in group and solo shows in Atlanta, Georgia; New Orleans; Louisiana; Chicago, Illinois; Richmond, Virginia; Lacoste, France; and Hong Kong, China. The artist has completed residencies at The Vermont Studio Center; SCAD Alumni Artist in Residence in Savannah; The Hambidge Center for Arts and Sciences in Rabun, Georgia; and Creative Currents in Portobello, Panama. He is a recipient of a 2015 Idea Capital Grant; a Southwest Airlines Art and Social Engagement grant; a recipient of 2015-16’ MOCA GA Working Artist Project Grant, and is a member of the 2014-15’ class of the Walthall Fellows.

Masud has also appeared in numerous television shows and movies. He is the co-anchor for Public Broadcasting which is a news based investigative journalism show titled Retroreport, and will be airing nationally in the prime time slot on a weekly basis. You can watch it here.

We wanted to share some more of our interview with Masud in a Q and A format below:

Q: What is your favorite piece?
A: Usually the one I am presently working on. I don’t spend a lot of time looking back.  When I complete a project it’s done for me. I’ve exhausted my level of curiosity and engagement with the work. I move on.

Q: What affect (known to you) has your art had on the viewer?
A: I have had people cry; laugh; get angry; and feel inspired by what I do.  The emotions represent the spectrum, and this for me, is intensely gratifying.  I am interested in work that challenges the viewer–work that elicits a point of view–that forces the viewer to make a choice. Work that doesn’t achieve that objective bores me.

Q: Upon studying your piece ’Snip/Hive’ I’ve asked myself is it possible for Masud to create a visual of the ‘100 link heavy chains’ in Siyah Chal – and to introduce the foul smell to really cause the viewer to somehow have their heart/soul be penetrated by such love/torture?
A: I don’t create explicit Baha’i related work. I don’t explore obvious Baha’i imagery. I’m interested in an essential truth, not necessarily in a didactic representation of my Faith.  If the heart is true whatever you create will be a reflection of the Divine.