In Persia his life was in imminent peril; and since remaining at Najaf-Ábád would have stirred up the agitators and brought on riots, he hastened away to Adrianople, seeking sanctuary with God, and crying out as he went, “Lord, Lord, here am I!” 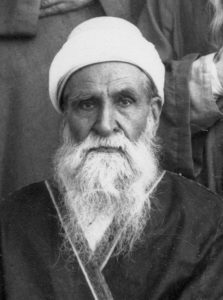 Zaynu’l-Muqarrabín
Born: May 1818
Death: 1903
Place of Birth: one of the villages of Najafábád, Iran (near Isfahán)
Location of Death: Akká, Israel
Burial Location: Akká, Israel

This distinguished man was one of the greatest of all the Báb’s companions and all the loved ones of Bahá’u’lláh. When he lived under Islám, he was already famed for his purity and holiness of life. He was talented and highly accomplished in many directions. He was the leader and spiritual exemplar of the entire population of Najaf-Ábád, and the eminent of that area showed him unbounded respect. When he spoke out, his was the deciding opinion; when he passed judgment, it took effect; for he was known to all as the standard, and the authority of last resort.

He had no sooner learned of the Báb’s Declaration than he cried out from the depths of his heart, “O our Lord! we have indeed heard the voice of one that called. He called us to the Faith—‘Believe ye on your Lord’—and we have believed.”  He rid himself of all impeding veils; his doubts dispelled, he began to extol and glorify the Beauty promised from of old. In his own home, and at Isfahán, he became notorious for declaring far and wide that the advent of the long-desired One had come to pass. By the hypocrites, he was mocked, cursed and tormented. As for the people, “the mass, as a snake in the grass,” who had worshiped him before, now rose up to do him harm. Every day brought on a fresh cruelty, a new torment from his oppressors. He endured it all, and went on teaching with great eloquence. He remained staunch, unmoved, as their wrath increased. In his hands he held out a full cup of Divine glad tidings, offering to all who came that heady draught of the knowledge of God. He was utterly without fear, knew nothing of danger, and swiftly followed the holy path of the Lord.

After the attempt on the Sháh, however, there was no shelter anywhere; no evening, no morning, without intense affliction. And since his staying on in Najaf-Ábád at such a time was a great danger to the believers, he left there and traveled to Iraq. It was during the period when the Blessed Beauty was in Kurdistán, when He had gone into seclusion and was living in the cave on Sar-Galú, that Jináb-i-Zayn arrived in Baghdad. But his hopes were dashed, his heart grieved, for all was silence: there was no word of the Cause of God, no name nor fame of it; there were no gatherings, no call was being raised. Yahyá, terror-stricken, had vanished into some dark hiding place. Torpid, flaccid, he had made himself invisible. Try as he might, Jináb-i-Zayn could find not one soul. He met on a single occasion with His Eminence Kalím. But it was a period when great caution was being exercised by the believers, and he went on to Karbilá. He spent some time there, and occupied himself with copying out the Writings, after which he returned home to Najaf-Ábád. Here the foul persecutions and attacks of his relentless enemies could hardly be endured.

But when the Trump had been sounded a second time, he was restored to life. To the tidings of Bahá’u’lláh’s advent his soul replied; to the drum beat, “Am I not your Lord?” his heart drummed back: “Yea, verily!” Eloquently, he taught again, using both rational and historical proofs to establish that He Whom God Shall Manifest—the Promised One of the Báb—had indeed appeared. He was like refreshing waters to those who thirsted, and to seekers, a clear answer from the Concourse on high. In his writing and speaking, he was first among the righteous, in his elucidations and commentaries a mighty sign of God.

In Persia his life was in imminent peril; and since remaining at Najaf-Ábád would have stirred up the agitators and brought on riots, he hastened away to Adrianople, seeking sanctuary with God, and crying out as he went, “Lord, Lord, here am I!” Wearing the lover’s pilgrim dress, he reached the Mecca of his longing. For some time he tarried there, in the presence of Bahá’u’lláh, after which he was commanded to leave, with Jináb-i-Mírzá Ja‘far-i-Yazdí, and promulgate the Faith. He returned to Persia and began to teach most eloquently, so that the glad tidings of the Lord’s advent resounded to the high heavens. In the company of Mírzá Ja‘far he traveled everywhere, through cities flourishing and ruined, spreading the good news that the Blessed Beauty was now manifest.

Once again, he returned to Iraq, where he was the center of every gathering, and rejoiced his hearers. At all times, he gave wise counsel; at all times he was consumed with the love of God.

When the believers were taken prisoner in Iraq and banished to Mosul, Jináb-i-Zayn became their chief. He remained for some time in Mosul, a consolation to the rest, working to solve their many problems. He would kindle love in people’s hearts, and make them kind to one another. Later he asked for permission to attend upon Bahá’u’lláh; when this was granted he arrived at the Prison and had the honor of entering the presence of his Well-Beloved. He then busied himself with writing down the sacred verses, and encouraging the friends. He was love itself to the emigrants, and warmed the travelers’ hearts. He never rested for a moment, and received new grace and bounty every day, meanwhile taking down the Bahá’í Scriptures with faultless care.

From his early years till his last breath, this eminent man never failed in service to the Manifestation. After the ascension he was consumed with such grieving, such constant tears and anguish, that as the days passed by, he wasted away. He remained faithful to the Covenant, and was a close companion to this servant of the Light of the World, but he longed to rise out of this life, and awaited his departure from day to day. At last, serene and happy, rejoicing in the tidings of the Kingdom, he soared away to that mysterious land. There he was loosed from every sorrow, and in the gathering-place of splendors he was immersed in light.

Unto him be salutations and praise from the luminous Realm, and the glory of the All-Glorious from the Concourse on high, and great joy in that Kingdom which endures forever. May God provide him with an exalted station in the Abhá Paradise.