Randall found himself alone in a large room with ‘Abdu’l-Bahá, who was sitting in a large chair, and appeared to be sleeping. “Here is the glass of grape juice,” Henry said, placing it on a table by the door. He was about to slip out when ‘Abdu’l-Bahá looked up and commanded him to sit down. Then ‘Abdu’l-Bahá closed his eyes again... 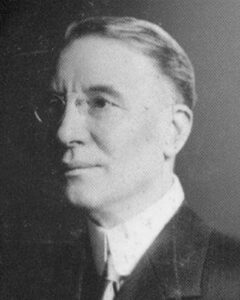 William Henry Randall, or “Harry” for short, was never late. He attributed his success, in part, to this habit. Randall had climbed the ranks of a shipping company – starting out by sweeping floors and running errands – and was now its president. In May, 1912, however, he found himself climbing up to the sixth floor of the Victoria Hotel in Boston to deliver a glass of grape juice to ‘Abdu’l-Bahá.

Henry had investigated all the world’s religions, or so he thought. Despite his professional responsibilities, he found the time to study under the tutelage of a Harvard professor. Yet Henry did not care to meet ‘Abdu’l-Bahá. “What do I want to meet another oriental for?” he said. “I’ve met Vivekananda and all the great orientals that have come to this country, and I don’t want to meet any more.”

Finally, out of politeness, Randall accepted an invitation to hear ‘Abdu’l-Bahá speak. He later wrote:

“I was very much impressed with his beautiful appearance, his words and the love which seemed to radiate from the very words he spoke.” Henry discovered that ‘Abdu’l-Bahá was different from any man he had ever met. “‘Abdu’l-Bahá was what he talked about,” Randall said. So when someone asked if he would deliver grape juice to ‘Abdu’l-Bahá at the Victoria Hotel, he was happy to comply. He purchased six bottles and rushed right over.

Henry didn’t expect to deliver it personally. Outside of the room he handed the bottles to one of ‘Abdu’l-Bahá’s Persian attendants, but was told he should deliver it to ‘Abdu’l-Bahá in person. Randall was hesitant to enter, until someone gave him a gentle push. 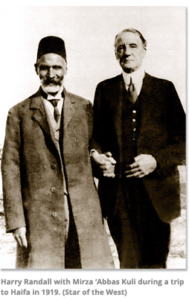 Moments later, Randall found himself alone in a large room with ‘Abdu’l-Bahá, who was sitting in a large chair, and appeared to be sleeping. “Here is the glass of grape juice,” Henry said, placing it on a table by the door. He was about to slip out when ‘Abdu’l-Bahá looked up and commanded him to sit down. Then ‘Abdu’l-Bahá closed his eyes again.

“I sat. I waited. And I waited,” Randall later recalled. “I was not used to be kept waiting and I was getting angry clear through.” Soon, he began to feel a prickling all over his body. Within a few minutes, his arms and legs, and then the rest of him, had all gone to sleep.

Henry berated himself for his lack of patience. “Here I am in the presence of a tired old man and I cannot remain reposeful for ten minutes. What good has my study of all the religions of the world done for me?” With this thought, the prickling in his body immediately stopped.

Then ‘Abdu’l-Bahá spoke. “Great is the power of the intellect,” he said, “but until it becomes the servant of the heart it is of little avail.” It was the first of many meetings between the two; often humorous, and always poignant.

I wish to refer, in conclusion, to the sad and untimely death of our dearly beloved and highly distinguished brother and fellow worker, Mr. Harry Randall. The unsparing efforts which he exerted for the promotion of the Faith, the passionate eloquence with which he diffused its teachings, the mature judgment and ripe experience which he contributed to its councils, the liberality with which in days of prosperity he supported its institutions, and above all his upright and generous character, are traits that will long live after him, and which bodily separation can never remove. I will most fervently supplicate at the holy Threshold, and wish you to join with me in my prayers, for the spiritual advancement in the realms beyond of a soul that has already achieved such a noble standing inthis world.

Later, in 1926, Green Acre came under the direct supervision of the National Spiritual Assembly of the Bahá’ís of the United States, which was elected at Green Acre for the first time in 1925. Both Sarah Farmer and William Henry (Harry) Randall, her successor administrator of Green Acre, were named Disciples of ‘Abdu’l-Bahá by Shoghi Effendi.

Edward B. Kinney and Carrie Kinney