Ḥájí ‘Abdu’r-Raḥím of Yazd was a precious soul, from his earliest years virtuous and God-fearing, and known among the people as a holy man, peerless in observing his religious duties, mindful as to his acts. His strong religious faith was an indisputable fact. He served and worshiped God by day and night, was sound, mild, compassionate, a loyal friend.

Ḥájí ‘Abdu’r-Raḥím of Yazd was a precious soul, from his earliest years virtuous and God-fearing, and known among the people as a holy man, peerless in observing his religious duties, mindful as to his acts. His strong religious faith was an indisputable fact. He served and worshiped God by day and night, was sound, mild, compassionate, a loyal friend.

Because he was fully prepared, at the very moment when he heard the summons from the Supreme Horizon—heard the drumbeats of “Am I not your Lord?”—he instantly cried out, “Yea, verily!” With his whole being, he became enamored of the splendors shed by the Light of the World. Openly and boldly he began to confirm his family and friends. This was soon known throughout the city; to the eyes of the evil ‘ulamás, he was now an object of hate and contempt. Incurring their wrath, he was despised by those creatures of their own low passions. He was molested and harassed; the inhabitants rioted, and the evil ‘ulamás plotted his death. The government authorities turned on him as well, hounded him, even subjected him to torture. They beat him with clubs, and whipped him. All this went on, by day and night.

He was forced, then, to abandon his home and go out of the city, a vagrant, climbing the mountains, crossing over the plains, until he came to the Holy Land. But so weak he was, and wasted away, that whoever saw him thought he was breathing his last; when he reached Haifa, Nabíl of Qá’in hurried to, and desired me to summon the Ḥájí at once, because he was in his death agony and failing fast.

“It would take too long,” he said. “And then ‘Abdu’r-Raḥím will never see ‘Akká. I long for him to have this bounty; for him at least to see ‘Akká, and die. I beg of You, send for him at once!” 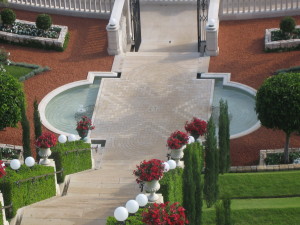 Complying with his wish, I summoned ‘Abdu’r-Raḥím. When he came, I could hardly detect in him a whisper of life. At times he would open his eyes, but he spoke no word. Still, the sweet savors of the Most Great Prison restored the vital spark, and his yearning to meet Bahá’u’lláh breathed life into him again. I looked in on him the next morning and found him cheerful and refreshed. He asked permission to attend upon Bahá’u’lláh. “It all depends,” I answered, “on whether He grants you leave. God willing, you shall be singled out for this cherished gift.”

A few days later, permission came, and he hastened to the presence of Bahá’u’lláh. When ‘Abdu’r-Raḥím entered there, the spirit of life was wafted over him. On his return, it was clear that this Ḥájí had become a different Ḥájí entirely: he was in the bloom of health. Nabíl was dumbfounded, and said: “How life-giving, to a true believer, is this prison air!”

For some time, ‘Abdu’r-Raḥím lived in the neighborhood. He spent his hours remembering and praising God; he chanted prayers, and carefully attended to his religious duties. Thus he saw few people. This servant paid special attention to his needs, and ordered a light diet for him. But it all came to an end with the Supreme Affliction, the ascension of Bahá’u’lláh. There was anguish then, and the noise of loud weeping. With his heart on fire, his eyes raining tears, he struggled weakly to move about; so his days went by, and always, he longed to make his exit from this rubbish heap, the world. At last he broke away from the torment of his loss, and hurried on to the Realm of God, and came to the assemblage of Divine splendor in the Kingdom of Lights.

Unto him be salutations and praise, and mercy ineffable. May God scatter on his resting-place rays from the mysterious Realm.