Ultimately he became the intermediary through whom Tablets could be sent away and mail from the believers could come in. 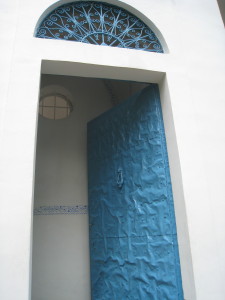 Muḥammad-Taqí came from the village of Manshád. When still young, he learned of the Faith of God. In holy ecstasy, his mind turned Heavenward, and his heart was flooded with light. Divine grace descended upon him; the summons of God so enraptured him that he threw the peace of Manshád to the winds. Leaving his kinsfolk and children, he set out over mountains and desert plains, passed from one halting-place to the next, came to the seashore, crossed over the sea and at last reached the city of Haifa. From there he hastened on to ‘Akká and entered the presence of Bahá’u’lláh.

In the early days he opened a small shop in Haifa and carried on some trifling business. God’s blessing descended upon it, and it prospered. That little corner became the haven of the pilgrims. When they arrived, and again at their departure, they were guests of the high-minded and generous Muḥammad-Taqí. He also helped to manage the affairs of the believers, and would get together their means of travel. He proved unfailingly reliable, loyal, worthy of trust. Ultimately he became the intermediary through whom Tablets could be sent away and mail from the believers could come in. He performed this service with perfect dependability, accomplishing it in a most pleasing way, scrupulously dispatching and receiving the correspondence at all times. Trusted by everyone, he became known in many parts of the world, and received unnumbered bounties from Bahá’u’lláh. He was a treasury of justice and righteousness, entirely free from any attachment to worldly things. He had accustomed himself to a very spare way of life, caring nothing for food or sleep, comfort or peace. He lived all alone in a single room, passed the nights on a couch of palm branches, and slept in a corner. But to the travelers, he was a spring in the desert; for them, he provided the softest of pillows, and the best table he could afford. He had a smiling face and by nature was spiritual and serene.

After the Daystar of the Supreme Concourse had set, Siyyid Manshádí remained loyal to the Covenant, a sharp sword confronting the violators. They tried every ruse, every deceit, all their subtlest expedients; it is beyond imagining how they showered favors on him and what honors they paid him, what feasts they prepared, what pleasures they offered, all this to make a breach in his faith. Yet every day he grew stronger than before, continued to be staunch and true, kept free from every unseemly thought, and shunned whatever went contrary to the Covenant of God. When they finally despaired of shaking his resolve, they harassed him in every possible way, and plotted his financial ruin. He remained, however, the quintessence of constancy and trust.

When, at the instigation of the violators, ‘Abdu’l-Ḥámíd began his opposition to me, I was obliged to send Manshádí away to Port Said, because he was widely known among the people as the distributor of our mail. I then had to relay the correspondence to him through intermediaries who were unknown, and he would send the letters on as before. In this way the treacherous and the hostile were unable to take over the mail. During the latter days of ‘Abdu’l-Ḥámíd, when a commission of investigation appeared and—urged on by those familiars-turned-strangers—made plans to tear out the Holy Tree by the roots; when they determined to cast me into the depths of the sea or banish me to the Fezzan, and this was their settled purpose; and when the commission accordingly tried their utmost to get hold of some document or other, they failed. In the thick of all that turmoil, with all the pressures and restraints, and the foul attacks of those persons who were pitiless as Yazid, still the mail went through.

For many long years, Siyyid Manshádí befittingly performed this service in Port Said. The friends were uniformly pleased with him. In that city he earned the gratitude of travelers, placed those who had emigrated in his debt, brought joy to the local believers. Then the heavy heat of Egypt proved too much for him; he took to his bed, and in a raging fever, cast off the robe of life. He abandoned Port Said for the Kingdom of Heaven, and rose up to the mansions of the Lord.

Siyyid Manshádí was the essence of virtue and intellect. His qualities and attainments were such as to amaze the most accomplished minds. He had no thought except of God, no hope but to win the good pleasure of God. He was the embodiment of “Keep all my words of prayer and praise confined to one refrain; make all my life but servitude to Thee.”

May God cool his feverish pain with the grace of reunion in the Kingdom, and heal his sickness with the balm of nearness to Him in the Realm of the All-Beauteous. Upon him be the glory of God the Most Glorious.