She taught at both the Tarbiyat Boys and Girls schools shortly after arriving, and became the Director of the Girls School. In 1912, the year after Lillian's arrival, a famine affected the province of Hamadan in Iran, and Lillian assisted in distributing funds raised by the Persian-American Educational Society to alleviate the famine. 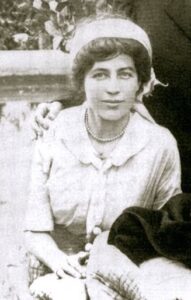 Lillian became a Bahá’í in New York in the late 1890’s along with her mother and siblings after attending classes taught by Ibrahim George Kheiralla. In 1910 a request that an American Bahá’í teacher assist in the establishment and development of the Tarbiyat Girls School in Tehran, Iran was sent to ‘Abdu’l-Baha, who instructed the Tehran Bahá’ís to request that an American woman move to Iran to administrate the School.

In late 1910 Dr. Susan Moody sent a request that Lillian, then a resident of Hoboken, New Jersey, move to Tehran to serve in the school on the behalf of the Teheran Board of Consultation (a Bahá’í administrative body for the city), and Lillian accepted. Lillian departed the United States for Iran in 1911. She stopped in the town Thonon-les-Bains in Geneva, France during the journey, and met with ‘Abdu’l-Baha who was staying there, having begun his first tour of the West. She arrived in Iran later the same month.

She taught at both the Tarbiyat Boys and Girls schools shortly after arriving, and became the Director of the Girls School. In 1912, the year after Lillian’s arrival, a famine affected the province of Hamadan in Iran, and Lillian assisted in distributing funds raised by the Persian-American Educational Society to alleviate the famine.

Lillian noted that most of the women serving as staff of the Girls school had not undertaken any formal studies themselves and as Director she made it a goal of the school to train girls who attended the school to teach there, and at other schools, after graduating. The Tarbiyat Girls School became the third largest girls school in Tehran under Kappes leadership, with 117 students of both Bahá’í and Muslim background in 1913. In addition to serving as the Director of the Tarbiyat Girls School, and a teacher at the Tarbiyat Boys School, Lillian aimed to teach older women in Tehran, and in 1915 she planned to establish teaching centres where women could learn to read and write.

Despite receiving high praise from ‘Abdu’l-Bahá, Lillian experienced some resistance to her management of the Girls School from the Tarbiyat Education Committee, then an all-male board. She was supported by the female staff of the School, and some of the male staff, who even offered to help her establish an independent school in 1916. She maintained a strong relationship with the wider Tehran Bahá’í community despite disagreements with the Education Committee.

At the age of 42, she passed away in Tehran in 1920 after suffering from typhus fever for three days.  She was the first Western Bahá’í to die in Iran, and was buried near the Tomb of Varqá. A fund that Lillian had founded for the Tarbiyat Girls School was renamed the Lillian Kappes Memorial Fund after her passing. ‘Abdu’l-Bahá revealed a Requiem Tablet in her honour on July 1, 1921. An excerpt:

She entered in unto Thee and into the path of Thy favor and goodness. I ask of Thee to bestow upon her a benevolent station; to accept her efforts and grant to her signs of favor and a station of kindness and pardon. O God! She had faith in Thee and in Thy Verses and was attracted by Thy fragrances and was reading Thy Words and Verses and giving the glad-tidings of the dawn of Thy pure unity and she called upon Thy Name in Thy regions.