They were required to spit on Siyyid Jafar's face. Despite this degradation, "he remained calm and resigned throughout his ordeal and manifested a spirit of sublime joy and love and thankfulness towards those who offended him. 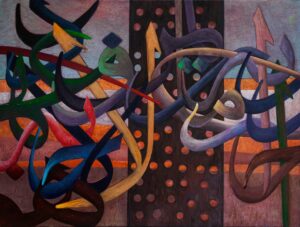 
The tablet Suriy-i-Nush was revealed in honor of Siyyid Jafar-i-Yazdi, who was a distinguished divine taught the Faith by Vahid, an early Babi. Since Siyyid Jafar was eloquent and highly respected, his public teaching resulted “in a great multitude” joining the Faith. Subsequently, the government and religious leaders joined in persecution with resulting martyrdom of many, including Vahid. Siyyid Jafar was captured and treated with disgrace, despite his position, by Zaynu’l Abidin Khan, the Governor of Nayriz, who was intent on torturing the remaining Babis.

The military presence required for persecution of the Babi’s had resulted in food shortage in the area. As the hungry people came to acquire their allotment of corn, they were required to spit on Siyyid Jafar’s face. Despite this degradation, “he remained calm and resigned throughout his ordeal and manifested a spirit of sublime joy and love and thankfulness towards those who offended him.” To those who hesitated to engage in this action against him, Siyyid Jafar encouraged them as he knew of their needs. Later, he was subjected to public beatings, which continued daily until observers contributed money as a “ransom” to temporarily stop the abuse.[1]

Siyyid Jafar’s companion, Haji Muhammad-Taqi, was a wealthy and respected man from Nayriz. He served the function of a banker in his community, and provided funds for the Babis. He applied his funds for propagation of the message of the Bab and supported Vahid and his followers during the persecution of the Babi community. Although he survived the siege of the fort, his properties were confiscated, and he was tortured daily by being thrown into a pool and then beaten by sticks and poles until the water was red with blood. This continued until the governor’s wife, after a significant dream, secretly arranged for their escape. They both later were able to visit with Bahá’u’lláh and receive His blessings directly.[1]

Although the Súriy-i-Nush was revealed before His declaration, nevertheless Bahá’u’lláh has left no doubt as to His own station. For throughout this Tablet He identifies Himself with God and speaks as His mouthpiece. He describes the appearance of the Prophets from Adam to the Báb, proclaims Their divine origin, depicts the life, character and mission of Each, demonstrates that in every age They were denounced and fiercely opposed by the priests and religious leaders, portrays Their suffering and persecution at the hands of the people and speaks of Their ultimate victory over Their adversaries.[2]

Anticipating His own declaration, Bahá’u’lláh in this Tablet counsels the learned men of the Bábí community not to rely on their knowledge. He urges them to cleanse their hearts so that when the appointed hour comes and the beauty of the Promised One is unveiled they may be enabled to recognize Him and embrace His Cause.[2]

It is in this Tablet that Bahá’u’lláh makes reference to one of His bitterest enemies, Shaykh ‘Abdu’l-Husayn-i-Tihrání, a crafty and deceitful mujtahid who was sent to ‘Iráq by order of the Sháh to carry out the repair of the Muslim holy sites in Karbilá. This man was notorious in royal circles for his mischief-making and this post was devised in order to remove him from Tihrán.[2]